In 2009, an unknown effects-laden sci-fi short, Panic Attack, grabbed the attention of Hollywood proving the internet had opened a new path for aspiring directors. That success spawned thousands of CG-savvy imitators. Most fell short, and the few that were bought up by Hollywood didn’t always have a happy ending (Pixels).

But amongst the noise, we saw Stephan Zlotescu’s True Skin and recognized it as a rare sci-fi film that not only demonstrated a mastery of effects, but wrapped it around a unique world and interesting story. Its rainbow-colored view of the future earned Stephan a million views and, more importantly, landed him a manager and a deal with Warner Bros. Now, Stephan has a new deal with Amazon and is just getting started.

Our New Filmmaker Series, takes a look at how technology is changing every aspect of filmmaking and the new wave of filmmakers blazing the way.

When did you first recognize the new opportunities that the internet has opened for film?

Around 2010 when The Gift and Panic Attack began causing bidding wars in Hollywood, I knew the internet had become the new film market. I always wanted to be a director and with my VFX knowledge and the release of consumer cameras like the Canon 5D, I realized it was time to attempt a magnum opus level short film. I set out to go through one of the hardest two years of my life, but when I finally released it, I was very pleased with the outcome.

You came out with a teaser for True Skin a year prior and had signed with Scott Glassgold (Ground Control) as a manager by the time the full short hit the web. What was your release strategy for the film?

I released the teaser 6 months prior, and then Scott Glassgold contacted me to sign with him. Scott was instrumental in helping me polish the short. When I finished the short, I don’t think any of us saw the potential of what had been created. Our strategy was to release it online and see what happens. 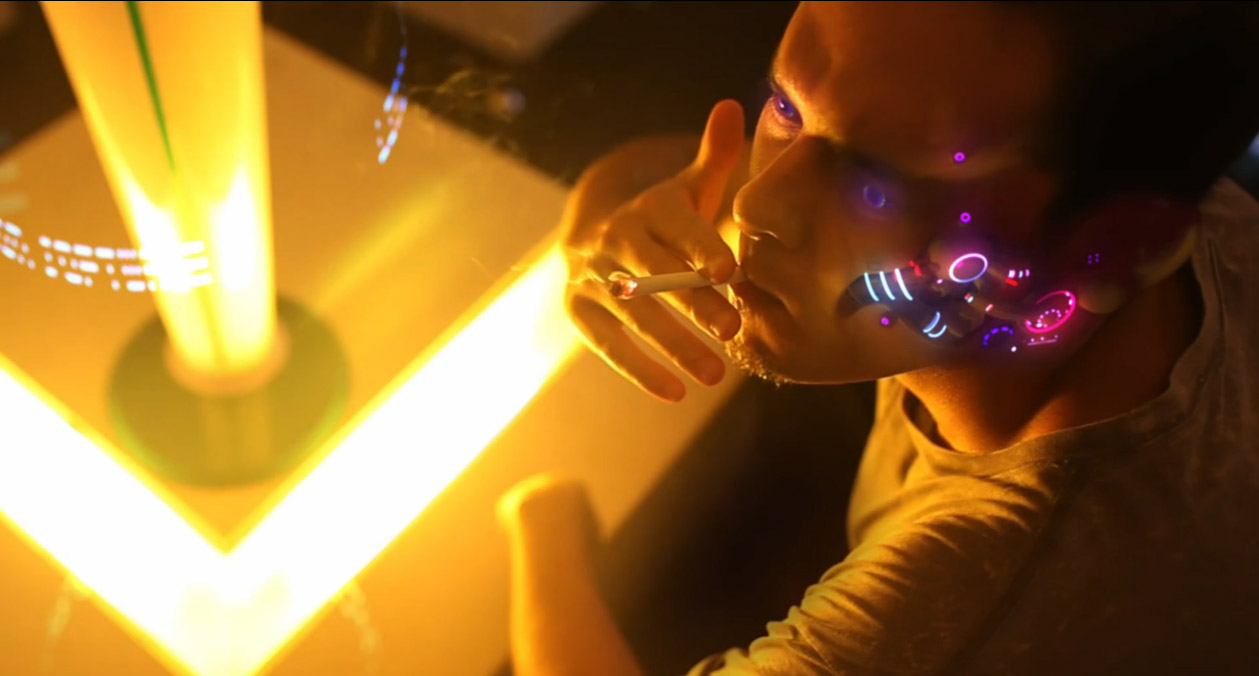 What was it about True Skin and your vision that stood out from the many other sci-fi shorts out there for audiences and those in the film industry?

At the time, sci-fi was very monochromatic, mostly encompassing a palette of blue or yellow hues. I think the electric vibrant color palette had something to do with it since nobody was really doing that at the time. The quick pacing in storytelling and being able to present a rich world within just a few minutes also helped it go viral. Many sci-fi shorts stick to one character or environment the whole way through and the pacing is usually slow. This is fine if you’re watching in a cinema or on TV, but for an online film for a generation with an attention span of a humming bird, not so much.

If you’re watching it off your phone or tablet, you want something fast, vibrant, and stimulating to the senses—something to keep you watching so that you aren’t distracted by the million other things that want to take your attention away.

These were the key factors to its design that I think helped propel it to where it got. As for the narrative, I think it was the first time we explored augmentation in such a realistic way—how you could use this technology and how it might affect society in the near future.

What happened between the moment you released True Skin and the day you landed the Amazon deal?

I released the short and Warner Brothers optioned it. Once it was at WB, development began.

What happened with the WB feature deal?

Unfortunately, as it so often goes, the script wasn’t coming together as nicely as everyone would have liked. Also the direction of the project wasn’t true to the spirit of the short. It became more of a Hollywood blockbuster than what I originally intended it to be.

Eventually the rights lapsed and I made the hard decision to take it back even though WB was fond of keeping it for another go around. I felt that it simply needed another approach to get it done right. So we started developing it on our own, but then Amazon came in rather quickly with an offer. At first, I was hesitant, but then it became quite clear that Amazon saw True Skin as I did. Neither of us wanted to make something “safe”. We had exactly the same vision for the trajectory of the project and the series angle also felt right. We could explore this world a lot more thoroughly than we ever could have as a feature film.

During the development process I was also developing a handful of other projects in which we should get announcements in upcoming months.

As a filmmaker, how are the new guard of studios—Amazon, Hulu, and Netflix—different from the traditional Hollywood studios?

To be honest, I’m just getting familiar with them myself, so I don’t have enough knowledge about this to give you an in depth answer. Yet, from what I’m seeing, they seem to be taking risks while the large film studios are not.

WB wanted a BIG film that would be essentially designed as a Hollywood blockbuster and set in New York. Amazon was looking for a grittier sci-fi series that will take risks in its narrative choices and be set in Thailand. Not that I am against directing a BIG Hollywood movie, but I felt that Amazon’s approach made more sense for this particular project.

You set out on this journey to become a film director. Is it what you thought it would be?

Most of the lessons I’ve learned are that it’s generally hard to break in and even harder to get a feature film off the ground in today’s current climate in Hollywood.

There just isn’t enough interest in the creation of low budget, high concept ideas as there is in milking current franchises with huge budgets.

As for becoming a director, it’s a very painful thing but I wouldn’t want to do anything else, so I’m in it for the long haul. 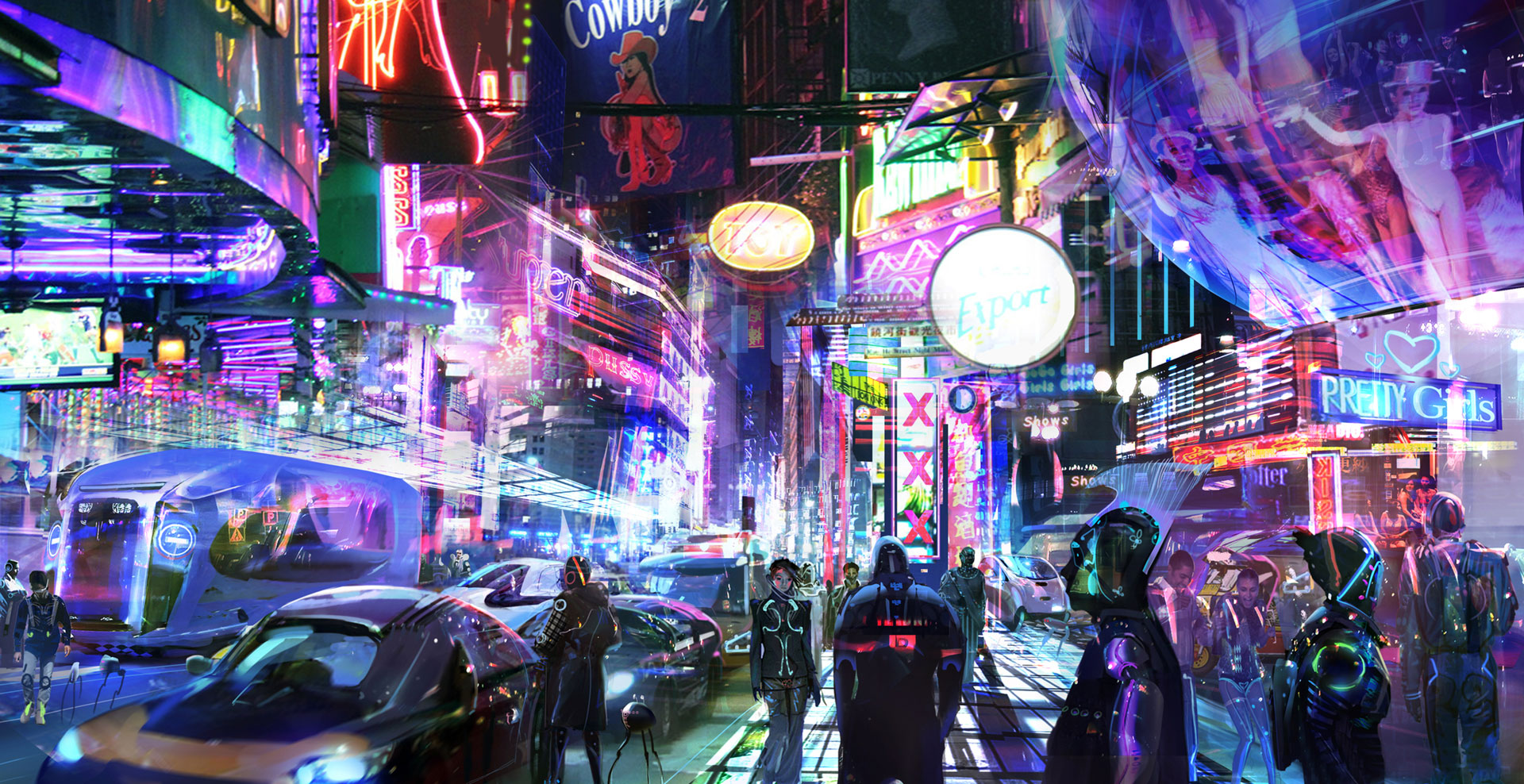 I’m working on quite a few projects since True Skin was sold to WB. Synthetika is a feature I wrote that we’ve been casting. I’ve been developing an anthology project with fellow directors, which are also friends of mine, Ruairi Robinson (Blinky™, Last Days on Mars), Macgregor (Similo, Law Zero), and Tyson Johnston (Lunar, Exist). I’m developing a feature which deals with transgenics in Brazil called Pastel. I’m also prepping another cyberpunk anthology called Tokyo Red with another batch of directors, Marcus Alqueres (The Flying Man) , Kaleb Lechowski (R’ha) , and Anh Nguyen (Temple, Akira Project). I’ve got a proof of concept I’m finishing up called Product Wars. True Skin at Amazon and another show that I can’t talk about yet.