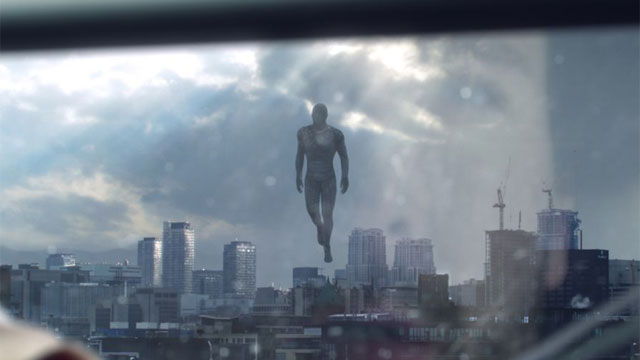 Released at a time when superhero movies have never been more popular, Marcus Alqueres’ ambitious tale of an enigmatic man blessed (or maybe cursed) with the power of flight, breathes fresh life into an often cliched genre. Providing no backstory for his protagonist and no explanation for his actions, The Flying Man’s dark approach means it’s a film that feels more Batman Begins, than Batman & Robin.

A new superhero is coming, only this time it’s on his terms. Will he still be considered a hero?

Having worked in the visual effects departments of numerous Hollywood blockbusters, including 300, Source Code and Rise of the Planet of the Apes, it’s no surprise that Alqueres’ film showcases some impressive post-production work. Featuring around 60 VFX shots completed by the director and visual effects veteran João Sita (Avatar, Twilight), The Flying Man captivates with stunning sequences of the titular hero soaring through the air and obliterating a speeding Mercedes. Setting out to create FX that enhanced his narrative, the Brazilian filmmaker gave Short of the Week an insight into his post-production process:

“I wanted to do it as fast as I could, but once you’re working most of the time alone, everything slows down. For example, if you give yourself 2 days per shot (which is very ambitious) and you have to create 40 shots on your own, you are spending 80 days on the process – which can be very challenging for your motivation. So I had to make things more dynamic, I couldn’t approach it like in a studio. I basically did a lot of back and forth with the editing until the shot was “good enough” for the story and it wouldn’t distract the viewer. With that said, some shots turned out in a matter of hours when others took me a few days until I was ok with it. For João it was the same, on his daytime he would work on some huge blockbuster in a studio and at night he would tackle a few shots for me, out of passion. Most of the time I had to ask him to stop polishing since it was good enough for the cut (visual effects artists could work for weeks on one single shot, just to make it perfect). So I had to play this producer/director/vfx-artist/editor role all together to make this work. The goal was always clear to me, I wanted the vfx to help the story and not distract the audience, hence 30% of these shots you might not even notice. For the tools we used some of the industry standard: Maya, Nuke and Photoshop.”

“From the beginning I didn’t want the visual effects to be the centre of attention, I wanted to use it as a tool to help telling stories that can’t be told without it. It can be a powerful resource if you use it correctly. Also being budget conscious makes you think about different solutions for sparing vfx shots. I love movies like the first Jurassic Park or Monsters where you don’t see much and when its done right it can be very effective for the story and budget. We tend to fill the gaps of what we don’t see. You can use sound and the right exposition to keep people caring. I opened the short with 1-min of intense exposition and that might have helped the next 7-min where you only hear the vigilante, it was a learning experience for me. The easy solution is always to add a huge shot for everything so I was constantly battling against that.”

Once his film was complete, polished and ready for viewing, Alqueres had to approach the difficult decision of what to do about releasing his film. Choosing to release The Flying Man online, bypassing the festival route in order to gauge audience reaction for a potential feature adaptation of his story, the filmmaker has been surprised and humbled by the reaction to his short. Already ‘Staff Picked’ on Vimeo, where it clocked up over 45,000 views in its first 2 days, we quizzed the director about his decisions regarding distribution and why he chose the online approach:

“A lot of people recommended me to go with the festivals first, but after doing a lot of research I thought I’d go online. The good thing is I can still apply for a lot of festivals. Short of The Week played a role in my decision after I read the article How we Launched Our Film Online. And again, it has to do with your main goal, mine was like you mentioned, I wanted to access a potential audience and its reception, since I wanted to develop this further into a feature/series. If you’re after a distributor, awards or a wider list of festivals to apply, that option might not be for you.”

With The Flying Man, Alqueres has produced a really solid piece of short filmmaking the proves he is much more than just a maestro of digital FX. Perfectly striking the balance between impressing and intriguing its audience, if initial reaction is anything to go by, we may shortly see another science fiction short making the transition to feature film.