What if fantasy characters from World of Warcraft existed in our world? That's what this documentary from Dublin explores, and I in turn explore how the film is perfect representative of short film today.
READ REVIEW
Next Previous 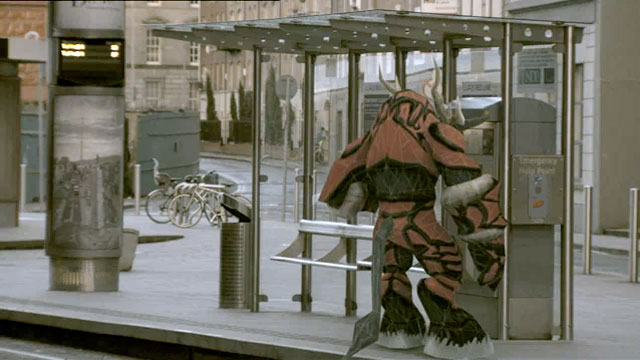 Avatar Days is a short film out of Dublin that popped up on the web a couple of months ago and broke through to a surprising amount of mainstream attention. With 3-D animation and live action compositing, the film hazards a guess at what our world would look like if World of Warcraft enthusiasts were to walk around as their alter-ego playable characters or “avatars”. Set to documentary interviews with four WoW-enthusiasts, the film’s inter-splicing of the two worlds is a loving jab at the absurdity of the one which WoW devotees flock to, while also taking an even more stinging jab at the monotony of our own.

With well over 1 million views in aggregate, Avatar Days represents a giant success for Piranha Bar, the small group of Irish visual artists who put the film together during a 4-day festival challenge. That success can be credited to the short film’s strong visual hook which lures in the audience in order to play upon their inherent anthropological curiosity. However it is the way in which such an irresistible concept is refined that fascinates. Closer inspection reveals the film as a nexus for a whole host of currents and trends in short film and online video; a composite of some of the most exciting developments within the form.  Ultimately while the film does not do any one thing well enough to gain it status as a timeless classic, this confluence of stylistic flows within the film makes Avatar Days a remarkable document of our time.

Avatar Days is at a fascinating crossroads of short film right now, both in the way it displays the traits of several distinct and popular movements within the loosely shared world of short film and internet video, and in how those traits lay across many different facets of the filmmaking process, linking the film to trends regarding visual techniques, filmmmaking communities, genre exploration and ultimately with its online success, exhibition.

Take the aforementioned visual hook, the replacing of the documentary subjects with their fantasy avatars. In doing so the filmmakers replicate one the most powerful trends we’ve seen throughout the last year: compositing animated footage into live-action scenes. This is of course the history of Hollywood big budget FX over the last two decades but now the expertise and the price point has filtered down to the short film set, driving new ways in which to employ such techniques. The novelty and appetite for this approach has driven huge numbers of YouTube views and unprecedented amounts of virtual column inches to films such as Panic Attack!, and Pixels. One may grouse about our propensity to continually reference these films, which by no means are unimpeachably wonderful, but one cannot dispute that the current rise of the special effects calling card has brought an unprecedented amount of eyeballs to short film online and is quite the buzz within the larger industry itself. It is the single biggest development within the short film ecosystem in several years.

Further than the mere presence of this technique though, is the way Avatar Days implements it. Rather than splendidly revelling in the artifice, a la GI Joe or Transformers, the film employs subtle tricks that trace back at least as far as the prototype for this kind of short film, Neill Blomkamp’s Alive in Joburg. Avatar Day’s long and fleeting shots, as well as drab color palate is a method of “roughing up” digital video to create a verisimilitude to low-budget reality footage productions, maximizing the “realness” of the fantastical CG by tricking the brain.

Alive in Joburg accomplished this through faux-documentary, a sort of on-the-scene, news reporting style, complete with shaky handheld cams, that found its way into commercials and feature films like Cloverfield.  Avatar Days is an actual documentary though,  of the more sedate, talking head variety, so the artistic challenge is choreographing images to words. While more thoughtful in its shots, the key similarity is in the “found” nature of its footage. Via long shots, the presence of the avatars looks as though they are almost accidentally captured. Furthermore, this sense of “found” footage extends to the fact that for the most part neither the sets nor locations have been dressed and lighted, a common approach in documentaries which helps supply the verisimilitude that Alive in Joburg achieves in other ways.

While a mere curiosity in the above discussion of the visual approaches, the status of the film as a genuine documentary likewise fascinates, as it gains the film status within my favorites, and certainly one of the most eclectic of short film genres- that of the animated documentary. One might argue that in a postmodern remix culture the specificity of genre identity is no longer so important, especially in the case of animated documentaries, where the subjects and techniques are so diverse.  After all, can you trace the similarities between Ryan and Dock Ellis?  I Met the Walrus versus Photograph of Jesus or the work of David Aronowitsch & Hannah Heilborn? Jonas Odell? The similarities are in some sense superficial. However I think there is anecdotal evidence at least that these superficial similarities are encouraging great work to be created, as all the above films and filmmakers have won major international awards in the last couple of years, including Oscar, Sundance, and the Cristal d’Annecy. While the genre is popularly traced back to the very beginnings of animation via Winsor McCay and his work Sinking of the Lusitania, there is certainly a modern resurgence going on right now,  and so I find it curious and interesting that Avatar Days can be one with some of the most commercially successful short films of recent vintage via its visuals, while at the same time claim kinship to films inhabiting one of the most artistically fecund genres.

Genre though is often a critic’s construction.  I do not know if Jessica Yu feels a bond with Chris Landreth, because they both made animated documentaries. Community, however, can be at the heart of the filmmaking process, and is definitely where the internet has made a truly radical impact on short filmmaking. The examples of web communities are numerous, whether they be the large technical message boards like DVXUSER, networking communities like the UK’s Shooting People, competition sites like Filmaka and Doorpost or at the broadest level, Vimeo, which has become a diverse destination for artists and enthusiasts to mingle virtually and share work. Wherever you look filmmakers have more resources in which to communicate, collaborate and share their work.

One of the interesting ways this manifests itself is the development of communities dedicated to particular, often new, techniques. The staggering amount of “Brick” films available on the internet is shocking to those who investigate, nurtured by large site communities like Brickfilms and Bricks in Motion. Not only do these sites provide camaraderie and technical know-how, but also enthusiastic audiences. To my eye Avatar Days is able to exploit a pair of such movements through the fundamental identity of the work.

First the short film can be qualified as a Machinima. Machinima, or films made using the animation-engines of video games, were introduced to many casual observers recently with John Hillcoat’s high-profile short film built using the game Red Dead Redemption, however they have long history preceding that. Indeed much of the early buzz for Avatar Days was helped along by machinima lovers which seeded the film in video-game blogs. Blog entries promoting the film often used “machinima” in their headline.

The second community Avatar Days connects with, it does so through the nature of its production. The film was created start-to-finish in an astonishing 4 days as part of a filmmaking challenge at the Darklight Festival in Dublin. While short film has always been a playground for the DIY crowd, more and more large national or local challenges and competitions are spurring people to go ahead and simply make a film. The growth of Filmaka and Doorpost has helped separate people from their often self-defeating perfectionism, and help get them started on getting those 10,000 hours under their belt that Malcolm Gladwell talks about. General short film fans are even getting some good output from the trend. Outliers, a film we recently featured, was created through a 48 hour competition. The popularity of such events, often web-organized, spurs the more avant garde festivals such as Darklight, which specializes in art/technology convergences, to go ahead and have such contests, without which there would likely be no Avatar Days.

As I know nothing about director Gavin Kelly, Pirahna Bar or the circumstances of the film’s creation though, I cannot speculate as to how such communities aided in the creation of the film. However I don’t think their importance can be underestimated in the ultimate success the film had once it was brought online. Created for Darklight’s 2008 installment, Avatar Days it seems has been sitting on a shelf for quite a while, known and beloved to the small filmmaking community in Dublin perhaps, but I for one had no knowledge of its existence. However within a week of coming online, the buzz machine had already kicked in, as large mainstream movie blogs like Cinematical were linking to the film. As I mentioned before, filmmaking and other enthusiast communities can really help get a film off the ground via blog-linking, and driving viewing statistics, creating that virtuous circle that defines what it is to be viral. In this case, Avatar Days had even had another additional aid, which is that the subject of the film happened to feature a very large and tech-savvy audience/community who in turn passed the film around.

Some of these amazing linkages embedded within this short are the result of filmmaker intent, others inherent in the circumstances surrounding the film’s production and its subject matter. Despite my desire to highlight geneology, tracing the film’s components outside itself, the diversity and abundance of these connections as well as the skill in their execution, should exculpate director Gavin Kelly and his team from any accusation of derivativeness or hackery.  I do believe that this confluence is in some sense serendipitous, the inevitable and happy by-product of an ocean of talent out there that, largely through web video I think, is increasingly interconnected and referential.

However, it easy to see how this can be interpreted as a formula: use trendy visual techniques, work within cutting-edge genres, utilize filmmaking forms that have devoted communities. Oh and choose your characters well; a film about watchmakers? Bad. A film about people who love cats? Good. Of course all of that is easier than it sounds, and lesson be learned, it is not a guarantor of a great film. Avatar Days itself as I hint at in the opening of this lengthy rant, suffers from the unforgivable sin of the documentary form—dull performances from its characters, sapping the film of a great deal of its narrative strength, and leading one to conclude that it is the sum of the film’s parts that are ultimately greater than the whole. However what interesting parts! And from a utilitarian standpoint, they work so well: large core audiences to build buzz, strong visual techniques to lure general audiences, even some highbrow connections for people who think too much about this stuff.

The result is irresistible. For a film about geeks in Dublin, made in 4 days by a bare bones outfit, rather than ask, “how did this film go viral?” the better question might be, “how could this film ever fail to do so?”