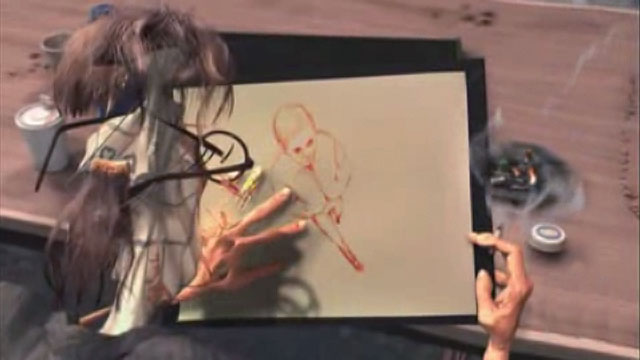 In kicking off our Award-Winner’s series, I give for your consideration Ryan, a tremendous film of beauty, ingenuity and of course entertainment. Utilizing surreal and gorgeous CG, Ryan is a unique marriage of documentary and animation, a pairing that is becoming more common in its wake; as we saw last year with the Oscar-nominated film I Met the Walrus, and this year with the celebrated documentary feature, Waltz with Bashir. Imitation is only to be expected, though, when a film wins the mac-daddy prize of them all: The Oscar for Best Short Animation, which Ryan received in 2005.

The film animates the interactions between its director, Chris Landreth, and a panhandling, ex-addict named Ryan Larkin. What elevates these interviews beyond simple sympathy, a mere portrait in degradation, is the relationship between the two. Ryan is a hero to Chris. An Oscar-nominated animator in his own right, Ryan Larkin is a man whose work in the 60’s and early 70’s “secured his place in the history of animated fimmaking” as the film states. But artistic and commercial frustration, paired with a debilitating addiction brought Ryan out onto the streets where Chris finds him.

While blessed with a fascinating subject in the figure of Ryan, Landreth finds more than mere tragedy, he finds a cautionary tale. The film emphasizes a kinship that Landreth feels towards Ryan, and finds him terrified. This emphasis on Landreth’s self-recognition is represented from the beginning as the film opens with him talking about his own failures. Thus the film morphs from what at first glance is a reclamation project, into as much of an examination of Landreth as of Ryan. Throughout the interviews he inserts himself into the work, and as a result the film becomes a meditation on the madness and sacrifice of the art.

This theme is represented verbally through the interviews and through Landreth’s voice-overs, but the film, as an animation, won most of its acclaim though its ability to impart these themes visually. The characters in the film are animated in realistic CG, but are damaged. Landreth has been mutated in a psychedelic fashion, and his fear of failure pops up periodically throughout the film as a literal entitiy, colorful strips which bind his head and face, blinding him. While Landreth has his scars, even missing part of his head, Ryan is simply lacking. In a literal sense. Ryan is represented more or less normally, but huge chunks of his face and head are simply missing. The metaphor is clear. The ravages of his lifestyle clearly have damaged him, but more sinisterly, it can be read that his art has in fact consumed him as well.The self-destructive impulses of creativity have hollowed Ryan out.

Ironically, in the film Ryan talks about his Oscar nomination. About how he lost out to Walt Disney. Later in the film he decries the lack of money as something that killed his animation career. The awarding of an Oscar to this film therefore brings out an added level of depth when watching, and reiterates the importance of these awards to independent filmmakers, a point I made much more eloquently around this time last year. Thanks go out to the Youtube Screening Room for bringing Ryan to us for free in a way that still benefits the filmmakers. Youtube is really bringing great films into this series as the last couple of weeks have showcased Short of the Week 2008 faves, I Love Sarah Jane and The Bloody Olive. Thanks go to NFB Canada as well for their continued production support of great artists, but also for bringing some of their illustrious catalog to YouTube.