A ton of festival kudo's have poured in for this special effects-laden, post-apocalyptic, zombie-film. That is probably because of its twist—it is actually quite sweet.
READ REVIEW
Next Previous 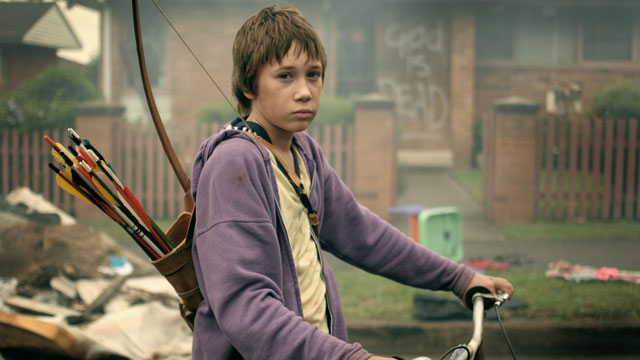 While I’m always open-minded when it comes to the hunt for new films to get excited about, I have to admit there are certain elements that just push my buttons, and Spencer Susser’s I Love Sarah Jane hits through them with military precision:

An underdog to root for – check

A bully to get his comeuppance – check

Kick-arsed girl to pine over – check

and, of course, Zombies!

The thing about ILSJ—co-written by Susser and David Michod—is that if you were to strip away the high production values and outlandish world setting, there’d still be at its core a touching age-old story of teen awkwardness in relating to the object of your desire that places our hero Jimbo in the shoes of Kevin Arnold or Dawn Wiener before him, it’s just that their obstacles were slightly less brain hungry. Susser’s direction and the central performances from Brad Ashby and Mia Wasikowska completely sell the story and illustrate that when it comes to world-changing events outside of our normal experience, we’ll adapt with worrying ease. But that doesn’t mean our personalities will change; a bully’s still a bully, brother and sister still fight and the kids aren’t gonna do the washing up if no one’s around to make them.

Of course, even with all that, it’s a hard sell if things just don’t look right. However, not only are the visual effects flawless—helmed by Mike Seymour of fxphd who also filled the role of Executive Producer—but I have to admit, Richard Mueck’s nerve-jangling zombi turn had me tauter than the rope holding him back as the kids taunt and mock him; this is, after all, a zombie flick and those critters have a pesky way of managing to sink their teeth into all but the overly cautious.

Much has been made of the technical achievements of ILSJ, with it hailed as “a showcase of the most modern digital production techniques” by Digital Producer Magazine. Director of photography Adam Arkapaw shot the film in Sydney, Australia on a Thomson Grass Valley Viper FilmStream digital camera with Codex Digital recording technology enabling shots to be checked on set in full HD for focus and special effects.

ILSJ has rightly kicked up a storm of festival praise at both Sundance and the Clermont-Ferrand International Short Film Festival where it was awarded the Prix Canal.