A Christmas classic, this hilarious comedy is a loving ode to film noir, full of murder, love triangles and double-crosses.
READ REVIEW
Next Previous 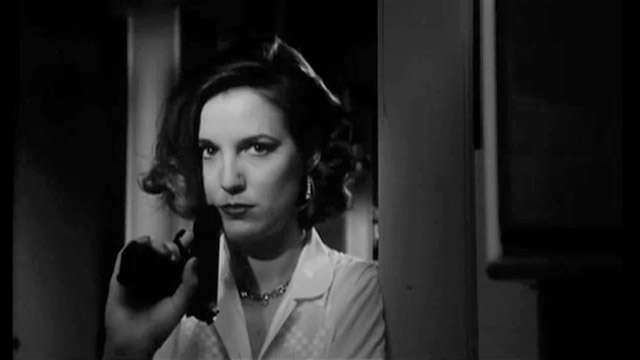 This week’s selection, though weighing in at a healthy 10 minutes, easily wins the grand prize in the category of twists/minutes ratio. A loving take on the conventions of the film noir, The Bloody Olive extrapolates these elements to the point of absurdity, creating a self-knowing and very funny take on the classic lover’s triangle.

The film, shot in a faithfully hi-key B&W and seemingly set in the 1940’s, quickly sketches out its scenario in broad strokes. Werner and his lovely wife Mylene are busy making their apartment festive for Christmas when Werner’s friend from work, Sam, arrives. Sam is not looking to share in the joys of the season however. Instead he accuses Werner embezzling money from the company ever since the recent and mysterious death of the company’s managing director. From this point forward, the comedy starts and violence, tricks and double crosses abound.

The true enjoyment of the film is its playful subversion of genre. In craft it is a very faithful homage to work of the era, from the aforementioned lighting, to its staging and orchestral swells. This referentiality, allows for the absurdity to do its work as the script goes big with the genre tropes. The intention of the film to engage in postmodern reflexivity is made very clear with the film’s opening and closing. The film’s opening credits begin with a song; a vintage number about going to the movies. The ending similarly comments upon itself as a work of film, as a character addresses the audience directly in order to impart an old truism as the moral to the story.

Yet pleasing as it is on an analytical level, the film is still just a whole lot of fun. It’s great to look at for one. It’s shot on 35mm, a real pro production all the way, and excellently photographed. The pacing is excellent as well. Obviously as I’ve alluded to, there are a lot of developments in which to keep the film humming along, but there is undeniable skill in the management of tension, its ebb, flow and release. The Bloody Olive is definitely a film where I wasn’t watching the clock.

With the defining traits of the film being self-awareness and absurdity, I was surprised to find out the film was not French. (Sadly all those European languages sound the same to me I guess). Instead it is the work of a Belgian director name Vincent Bal. Seeing as how this film was produced way back in 1996, I hoped to find more recent short film work by him, but to no avail. It seems he has stayed busy in Europe with features and TV work though fortunately. Fortunately for my ego as well, I found that a French connection does exist—Bal adapted the story from a comic strip by famed cartoonist Lewis Trondheim. This link from the P.O.V. journal compares the various versions of the story.

I ran into this film while exploring the FutureShorts Youtube channel. FutureShorts is a fascinating short film enterprise that I have been peripherally aware of for some time due to its heavy operations in the U.K.—the place to be it seems for exciting short film developments. Looking more into it for this review though I have to say it sounds really cool. FutureShorts is a hybrid, part festival, part label, part distributor, which really seems to try and address some of the gaps in the current short film political economy. I’d encourage you to check out their website. They also have their first compilation DVD coming out, which features work from SotW certified filmmakers Gaelle Denis and Arthur de Pins.