One day, Gerald wakes up as a woman… The adventures of a man transformed into woman and who discovers a new life in a new body.
READ REVIEW
Next Previous 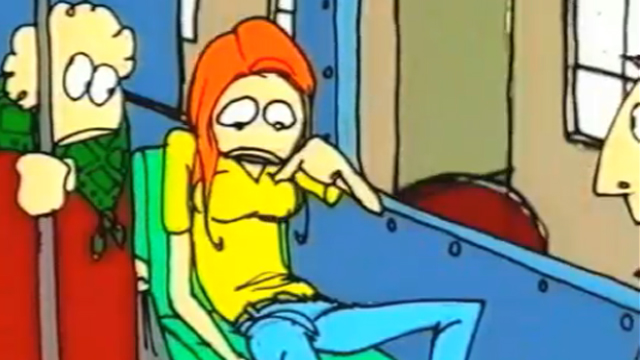 When viewing the work of Arthur De Pins one is in familiar territory of the born cartoonist. He is a natural artist able to turn out comic caricatures seemingly at will. I could have selected any of three films to feature though his 2001 Géraldine was his first film and launched him into the animation business.

The movie commences with an alarm clock and scream as our hero awakens to discover that inadvertently and inconveniently he is a she. The effect of such a life changing experience is the subject of this hilarious romp through Parisian cafés, nightclubs and pavements. Arthur’s febrile wit encompasses the distracting effect on Geraldine’s relationship with his girlfriend, the impact his red headed good looks and curvy frame has on men whom, in a previous existence, had been work colleagues or soccer opponents. It is also the tale of a man’s reconciliation with the inner woman that lurks within. Well perhaps not.

Geraldine does however come to terms with his real self and capitalize on his fame, as celebrity, champion of women’s rights, politician, red carpet walker. There is even a frantic scene at the end as his ex-girlfriend tears along country roads to get him to the altar on a motor cycle. But does she want to lose him?

Viewing the film again for the review I am struck by the beautiful simplicity of Arthur’s drawing, the strong use of colour and the panoramic vistas of the Parisian landscape seemingly effortlessly rendered by use of Flash and After Effects for compositing. Each frame has the appearance of a well-crafted comic postcard.

There is a real zip to the tale, as for eight minutes or so the ramifications of the bizarre scenario are explored with the satirical touch that works so well because Arthur does understand his world. His later movies, L’eau de Rose and La Revolution des Crabes, are well-regarded in the festival circuit and recommended viewing for fans of animated shorts, particularly the latter which has much to say of revolutionaries and is also very funny. Arthur is also a contributor to the monthly comic magazine Fluide Glacial.