The path from short film to television is one we’ve witnessed many of our previously featured filmmakers take over the years. Whether it’s Lewis Arnold’s impressive run of hits on UK television, Jonathan Entwistle’s hugely popular The End of the F***ing World or the number of short film directors who have helmed episodes of Sex Education, there can be no mistaking the fact that the people commissioning TV have one eye on the short film world for talent and ideas.

Looking at that list above, those are all live-action projects…but what about animation? The likes of Grant Orchard (Hey Duggee), Conor Finnegan (Becca’s Bunch) and Julia Pott (Summer Camp Island) have gone from making impressive short films to creating their own animated series and more recently we’ve seen Dan Ojari and Mikey Please bring a little festive spirit to Netflix with Aardman Christmas special Robin Robin. While commissioning a family-friendly stop-motion from the ever-consistent Aardman didn’t feel like a huge risk from the streaming giants, their decision to programme Nexus Studios’ dark comedy anthology, The House, was a bit more surprising.

Described by Nexus Studios co-founder and series producer Charlotte Bavasso as “a collection of cinematic stories that are intelligent, witty, inquisitive, warm and yet packed with offbeat humour”, the anthology consists of three individual stories, all set in the same home. Directed by some of the hottest names in the world of independent stop-motion – Emma de Swaef & Marc Roels, Niki Lindroth von Bahr and Paloma Baeza – news of the anthology was released during the 2021 edition of the Manchester Animation Festival. Eager to discover what we can expect from The House, I tuned into a Q&A with Bavasso and the co-directors as they discussed the origins of the project and working with Netflix.

With festival director Steve Henderson initiating the conversation by enquiring how the idea to create The House first originated, Bavasso was very open when describing its inception, pointing out it was “slightly unusual in its conception”. Driven by a realisation that there was a commonality in the work of its co-creators, they all gathered at the producer’s home and together the team came up with the idea that their narratives should exist in the same house, across three different eras.

Chapter One by Emma De Swaef and Marc James Roels 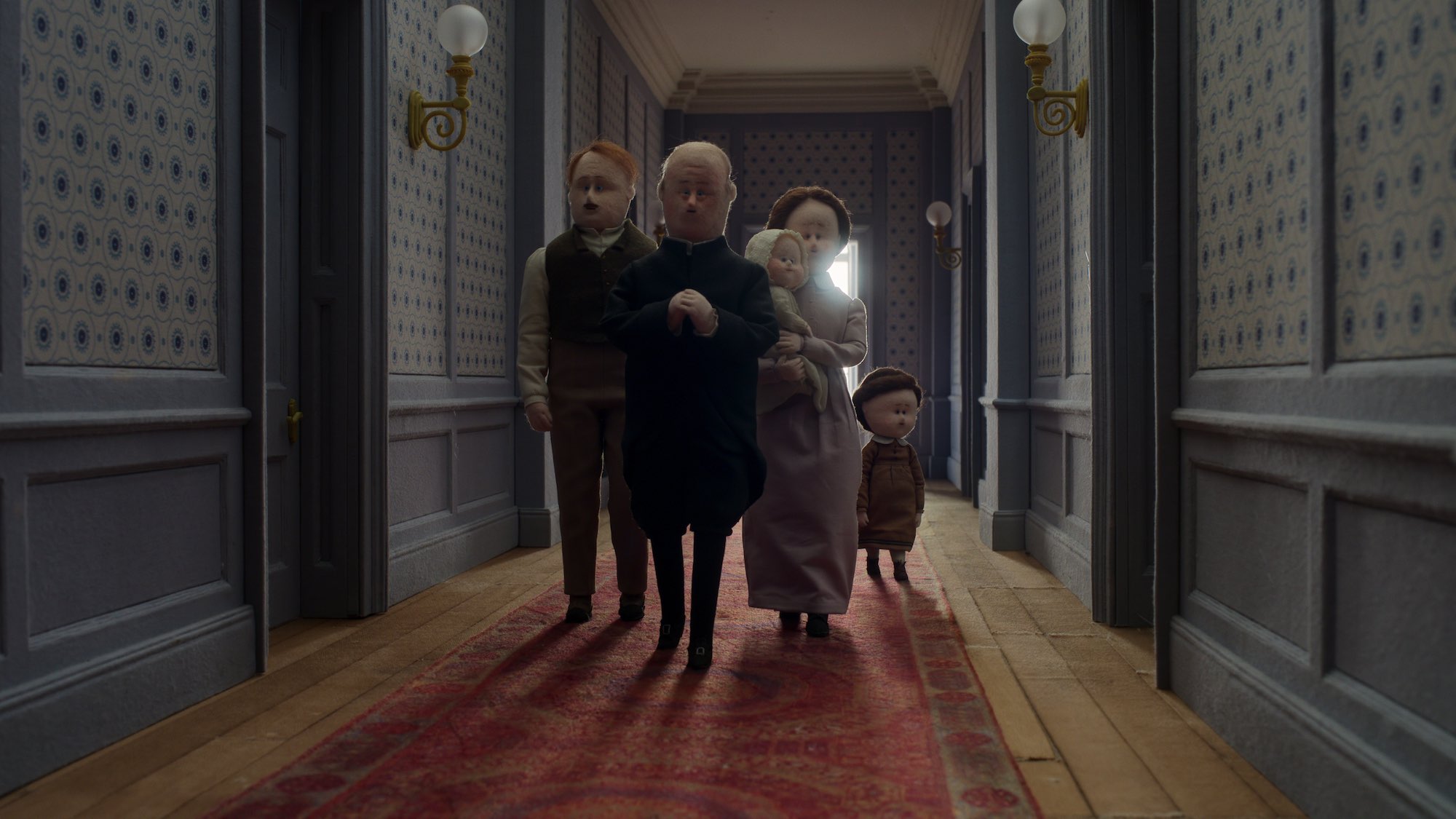 (L to R) Matthew Goode as Raymond, Mark Heap as Mr. Thomas, Eleanor De Swaef-Roels as Isobel, Claudie Blakley as Penny, and Mia Goth as Mabel in The House. Cr. Courtesy of Netflix © 2021

Synopsis: Set in the 1800s, impoverished Raymond meets a mysterious benefactor who promises to restore both him and his family to their former status. The family soon learns that wants and desires may not always lead you where you expect.

With Emma De Swaef and Marc James Roels helming chapter one of the series, they chose to explore what life was like before the titular house was built. Describing their narrative as an “origins story”, the directorial duo admitted it was a “bit nerve-wracking” handing over a lot of the hands-on production to others, as they were used to doing these elements themselves (De Swaef mentions how she created all the characters in their previous short The Magnificent Cake! herself). Their worries didn’t last long though, as they quickly realised what a “professional, well-oiled machine” of a crew they were lucky to be working with. 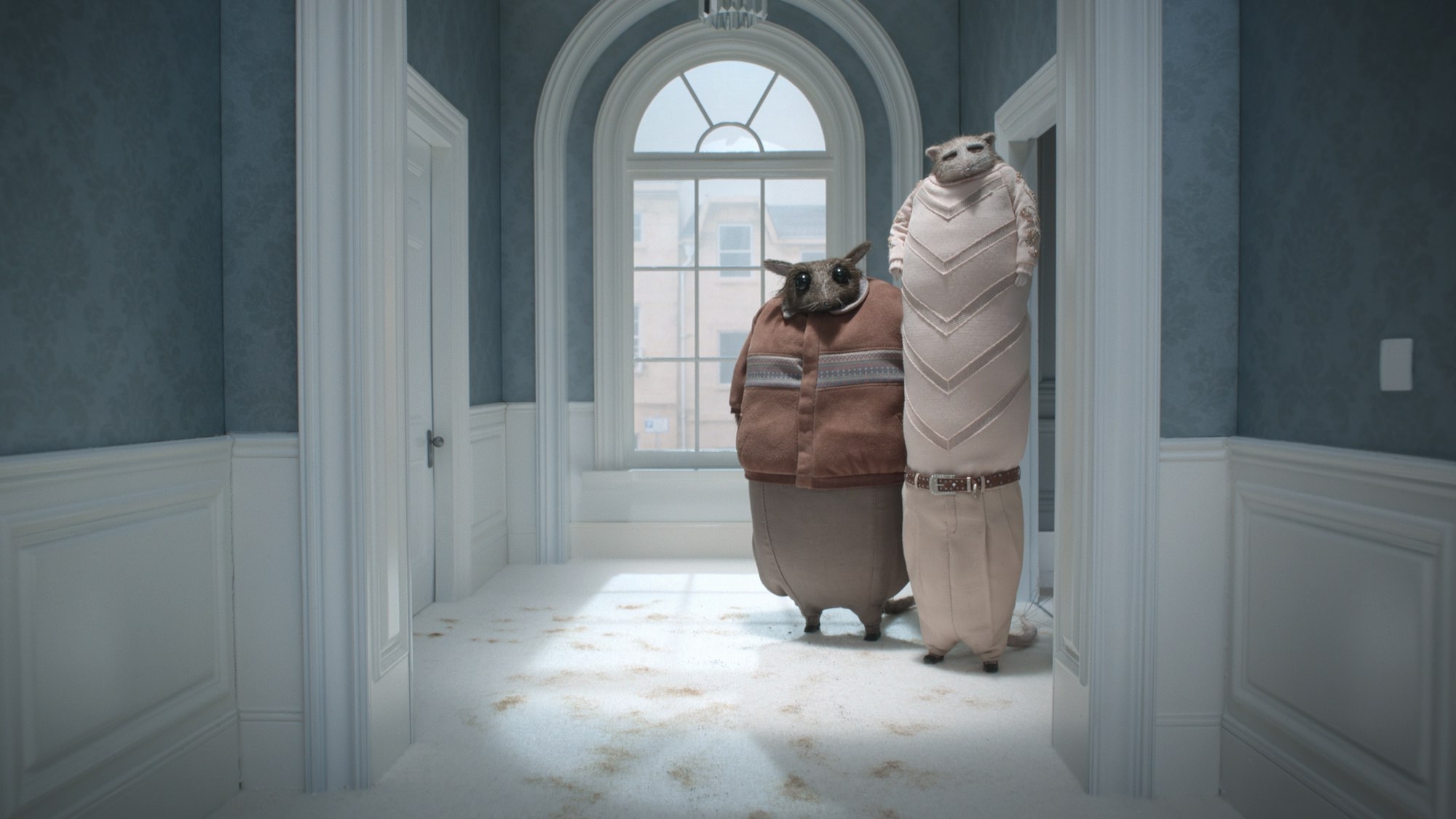 (L to R) Sven Wolter as Odd Man and Yvonne Lombard as Odd Woman in The House. Cr. Courtesy of Netflix © 2021

Synopsis: Set in the present day, a harassed property developer tries to make a quick sale from a renovation. However, some eerie unexpected guests have other plans and become the catalyst to a more personal transformation.

For chapter two of The House director Niki Lindroth Von Bahr took the directorial reigns and decided to set her story in “our time”, with the aim of creating a “claustrophobic chamber drama”. Following a developer who buys the house with the intent of selling it for a profit, the discovery of inhabitants in the property leads him into what the filmmaker describes as a “journey into complete madness”. Though all the directors were quite tight-lipped about the finer details of their individual films, Von Bahr does reveal that fans of her work can expect to see some of her trademark musical elements in chapter two. 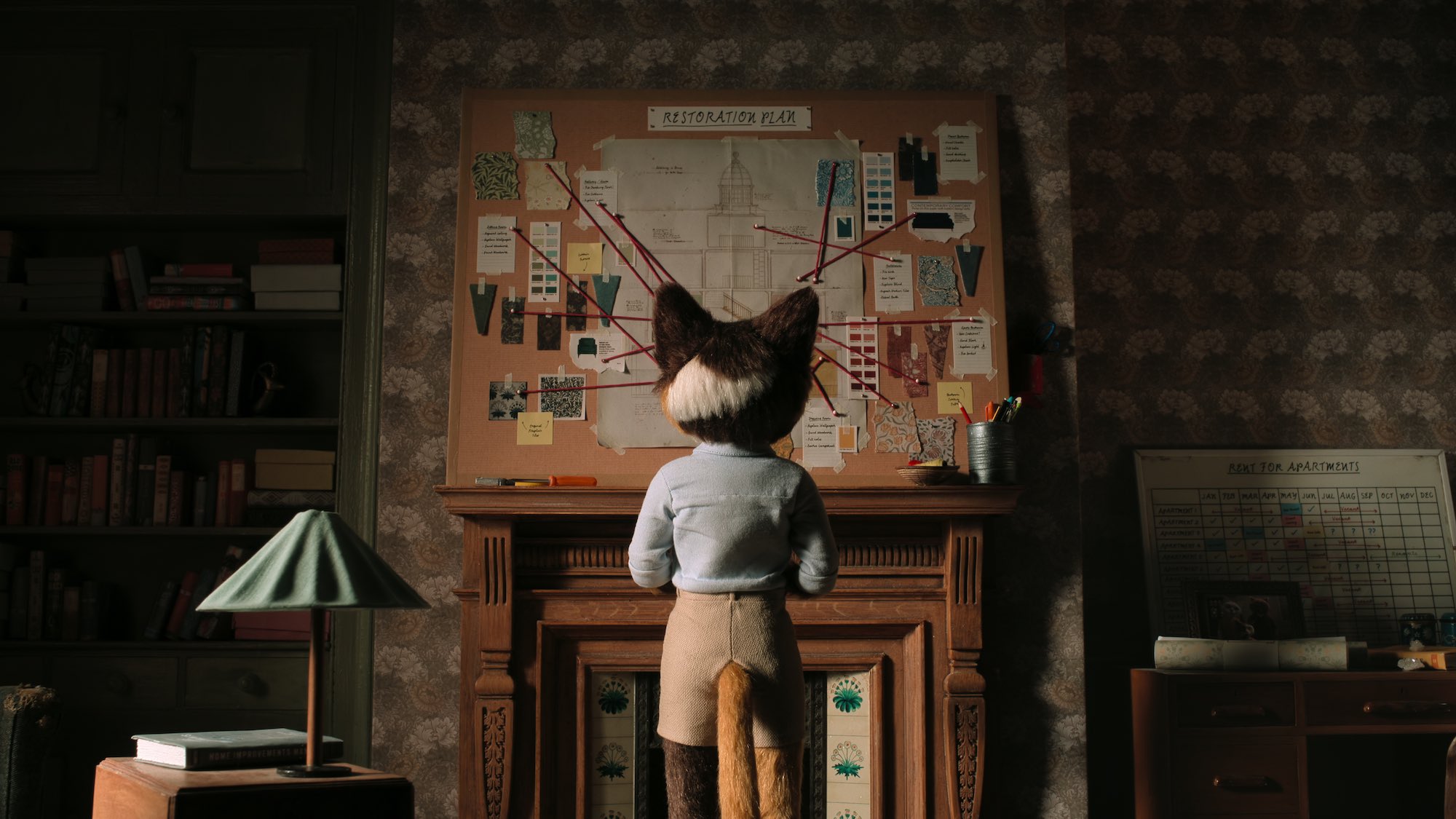 Susan Wokoma as Rosa in The House. Cr. Courtesy of Netflix © 2021

Synopsis: Set in the near future, the house survives a hugely changed landscape. We meet Rosa, a young landlady determined to stay in her beloved crumbling house and restore it to its former glory. But Rosa’s unrealistic vision has blinded her to the inevitable change that is coming.

Paloma Baeza directs the third and final entry in the anthology and explains that her narrative is very much the “futuristic chapter”, with it set in a flooded landscape where climate change hasn’t been averted. Aiming to convey an environmental message, she was inspired by the idea of people who refuse to leave their homes in catastrophic circumstances and hopes to shine a light on the importance of change when it comes to saving our planet. The director is keen to point out that this message should never feel forced upon her audience though, so her chapter is very much character-focused, with these notions of how humanity has impacted the planet acting as an undercurrent to her story.

Filmed in Manchester, at Mackinnon & Saunders, who Bavasso labels as “some of the best puppet makers in the world”, the team were eager to shoot in one place to help form connections between the crews and the stories. With Baeza revealing that even though her episode is the last one in the story of The House, she actually shot her film second with her production crossing over with both the others, she describes the process of being in the studio with her co-directors as “magic”. 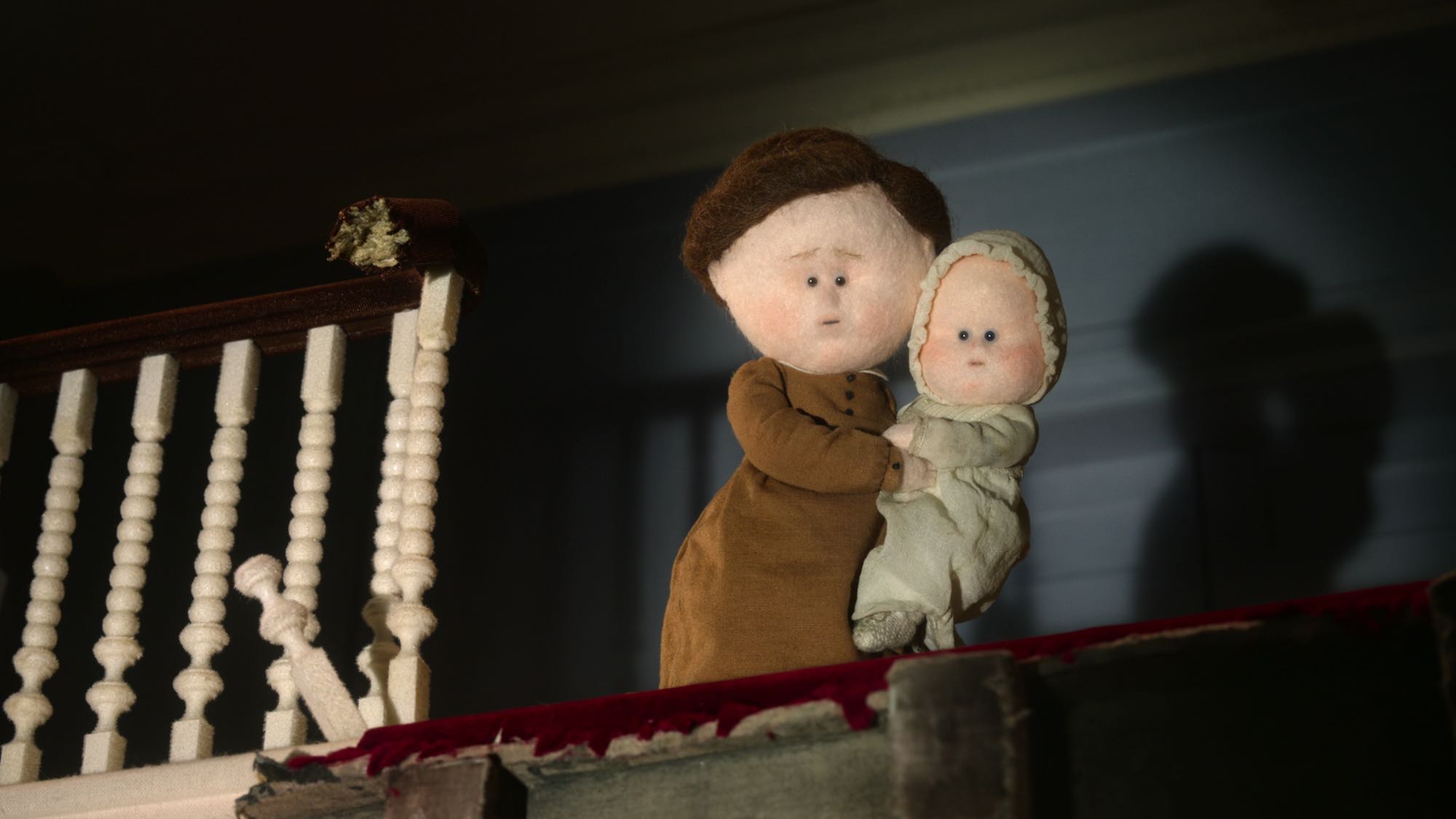 (L to R) Mia Goth as Mabel and Eleanor De Swaef-Roels as Isobel in The House. Cr. Courtesy of Netflix © 2021

De Swaef was also enthusiastic about working with Mackinnon & Saunders, explaining how their methods were essential in taking their animation to “another level”, citing the ball and socket armatures as making a real difference (they were used to working with wire armatures) in taking their technique forward. The director also revealed how she had actually visited the Manchester studio looking for tips when making Oh Willy… and describes directing there as a “dream come true”.

Talking of the experience of making a film for Netflix, Roels admits that he expected “to get notes at every stage” from the streaming giant, but reveals their input as “very generous” in allowing them “total freedom”. Something that Von Bahr completely agrees with, expressing she was “very surprised” to be able to work so “freely and artistically” on the project and expected many more limitations from a project of this size.

When quizzed, by Henderson, on what they were hoping to get from the project,Bavasso explained that she was largely aiming to share the “extraordinary talent” of these four directors with a “broader audience” and says that anthology is “quite a unique format”.

Speaking to the directors about how they expect audiences to react to their creations, Roels says that after living with the films for so long, he’s “curious to see how people interpret them”, admitting he’s always been fascinated by what a viewer sees in their work. Von Bahr agrees and is looking forward to everyone seeing how well the three films work as a complete viewing experience – something she was surprised by herself, revealing that when she saw them together for the first time she was impressed how they elevated each other. 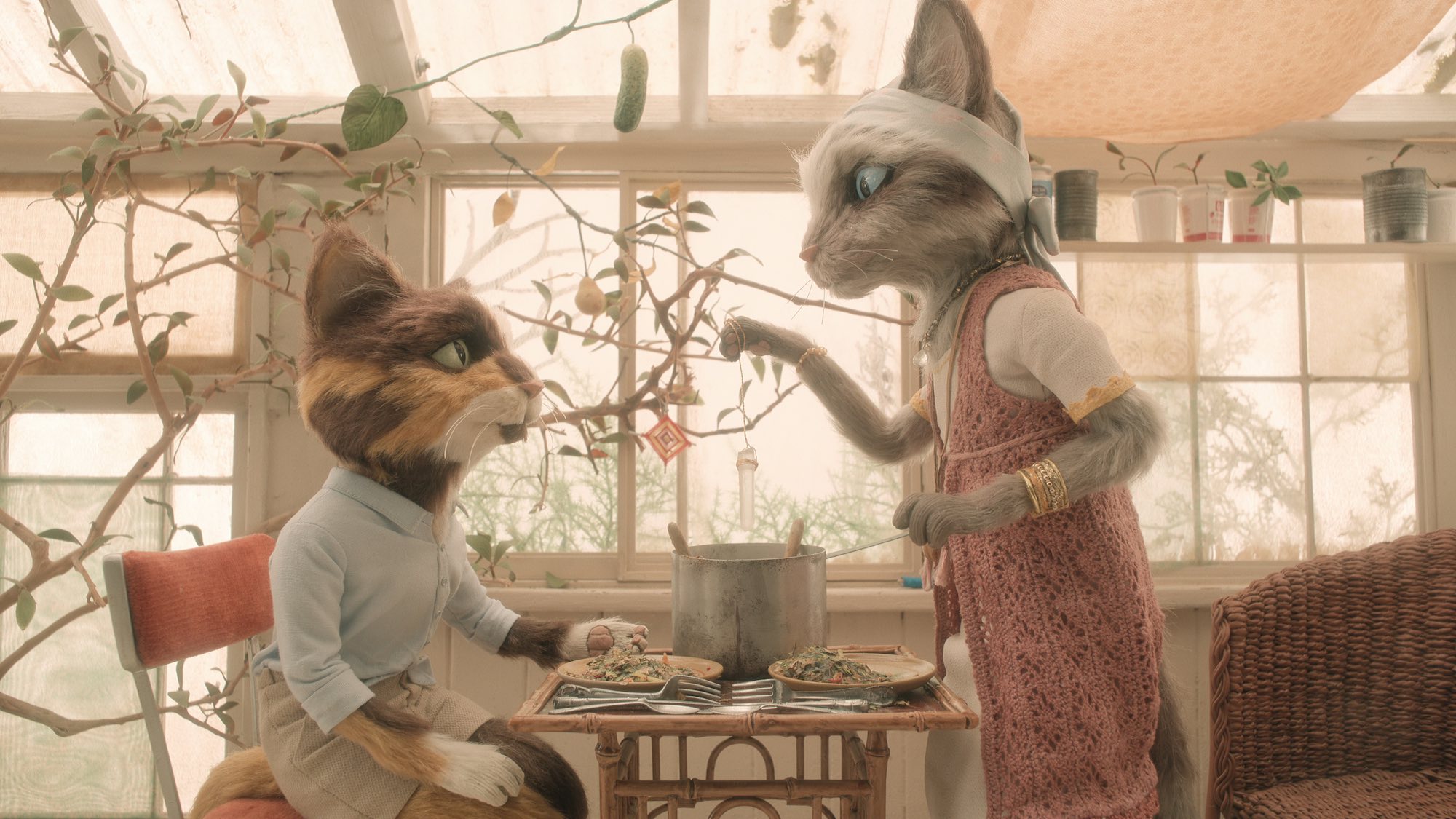 (L to R) Susan Wokoma as Rosa and Helena Bonham Carter as Jen in The House. Cr. Courtesy of Netflix © 2021

Baeza is also excited to welcome an audience into the world of The House, but hopes the artistry of the anthology adds an extra dimension to how viewers see the project. “Stop-motion has this added element, which is about craft, it’s front and centre and you can see what incredible work humans are capable of” she explains. Adding that, “without being too saccharine about it, there is something about what we’ve done which represents the good side of what’s possible, particularly in the circumstances in which we’ve achieved it and I’m just looking forward to everyone being a part of that”.

Watch The House on Netlfix now

Stills and further details via nexusstudios.com