A small bird with a fear of flying tries to avoid heading South for the winter.
READ REVIEW
Next Previous 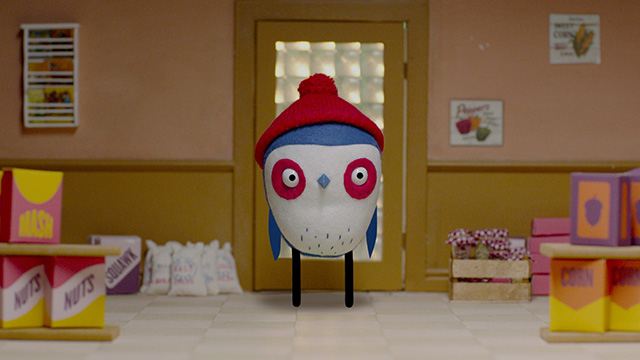 Playfully blending live-action puppetry with 2D and 3D animation techniques, Conor Finnegan builds on the visual flair and quirky storytelling displayed in his graduation film Fluffy Mc Cloud with latest short Fear of Flying. Showcasing a more ambitious narrative than seen in his earlier work, Finnegan’s latest tale follows his feathered protagonist as he stocks up on supplies and battens down the hatches for a long cold winter.

With such a strong and intriguing visual style for his short we had to talk to the Irish filmmaker to discover the inspiration behind the distinct look of Fear of Flying, whilst also grilling the animator about his production process and working with a crew:

“I’d blended stop-motion and 2d in my grad film Fluffy Mc Cloud but I guess it was the tribute to Where the Wild Things Are, called Buildings and Vampires made by Nico Casavecchia and his friends that inspired me to do it with live-action. They shot puppets on sticks and comped 2d animation over it. It had a really natural feel to it that I was immediately drawn to. But they’d left the sticks in. I decided to do something similar but to remove the sticks altogether in post.”

“The film took about 9 months to make.”

“It started with a script and then I began doing character designs and mood-boards, etc. After that I story-boarded and made the animatic. The animatic went through a lot of changes, some things were thrown out while other things were added. It was a weird one for me as all my previous shorts had basically been gags with less of an emphasis on story arcs and character development. I think I learned a lot in the process. While I was fine-tuning all that, the sets and puppets were being made by the amazing Fallover Bros and Renate Henschke. We shot all the live-action elements over 5 days in South Studios Dublin and then I edited the footage and began comping the backgrounds, getting rid of sticks, adding the arms and legs, etc. This was all done in After Effects, mostly using masks and the Puppet Pin Tool. Meanwhile an animator in Germany did the 3d lip/ beak sync animation in 3ds Max and a friend in Dublin did the 3d tracking using Syntheyes. Finally the beak was comped by a guy in South Africa, again using After Effects. While all this was going on, Echolab was working on the music and sound design. Everyone worked remotely but we’d catch up regularly on G-Chat or Skype and were more or less all in the same time zones.”

“It was the biggest crew I’d worked with up until that point.”

“In the past I’d done everything myself. I think there were 14 or 15 people on set for 10 hours a day for 5 days while we shot the live-action puppets on sticks. I was probably the least experienced of the bunch so it was pretty intimidating at the start but I think that was eased by the fact that everyone working on it was so good at what they did. I was also lucky enough to have an excellent producer. In the end we were well prepared and it all went smoothly enough.”

With Dougal’s tale now set free on the internet, Finnegan admits he may return to the techniques displayed in his current short in the future – citing their “charm and potential” as the attractive qualities that make him eager to develop this style. In the meantime though, the animators next work couldn’t be more different to the beguiling puppetry on show in Fear of Flying. Made completely in 2D and created in After Effects, his contribution to the Late Night Work Club is the slightly disturbing tale of man who discovers something rather surprising on a visit to the toilet. Labeled Asshole by its creator, its title may give you an idea of what to expect.