Gorillas, Zebras, Lions, and Unicorns party and clash in the jungle that is teenage drama from British short veteran, Jonathan Entwistle.
READ REVIEW
Next Previous 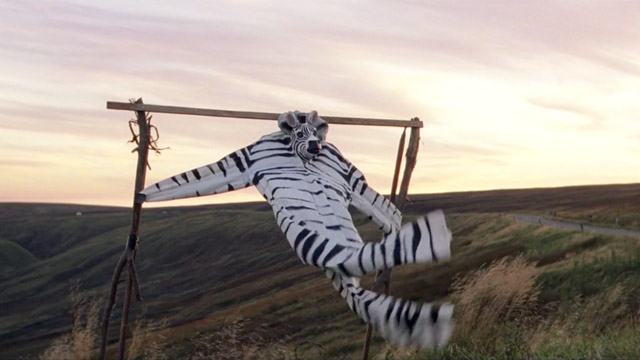 Two zebras walk into a party watched by an owl. They find the unicorn they’re looking for but she’s guarded by the lion, so instead they score from a gorilla and dance with all the other animals. That’s not the set up for a Beatrix Potter book but rather the opening scenes of Jonathan Entwistle’s zoomorphic short Human Beings.

Those of us who’ve followed Entwistle’s previous films know that two key ingredients are normally guaranteed: fully-realised teen protagonists and the Northern England moors captured in all their rolling glory. I’m happy to say that both are present and correct. That isn’t to suggest that Entwistle’s simply retreading old ground here. Human Beings certainly feels like his most ambitious film to date. Its sprawling Summer blowout party is populated with a visual feast of animal-costumed revellers—an update of the masked ball with its metaphorical use of costumes to reveal hidden motivations—Olly’s owl hovers on the sidelines ever vigilant, Jamie’s unicorn is mysterious and elusive while Scott’s lion struts at the top of the social food chain, raging territorially over his domain.

This “actions of the night before spilling into the consequences of the morning after” story is captured in appealing 35mm earthy tones by cinematographer Justin Brown, who not only shot Entwistle’s previous film The Good North, but also appears to be the go-to DP for quality British shorts (having shot past SotW picks Echoes and Bro). Ben-Ryan Davies also returns to Entwistle’s set, (having starred in his London Film School graduation short Cotten Stones) as Benny and imbues the part with just the right balance of hesitant longing and fiery loyalty to elevate Human Beings from a Skins finale knock-off to a narrative whose outcome you can both sympathise with and invest in.

Before the final showdown, Benny walks past a rock face displaying the spray painted question “Are We Human?”, it’s a question that makes sense to anyone who lived their teen years under the threat of being ‘blitzed’.