A short film about Anya, a female sex trafficker who faces a moral dilemma when she discovers that the young girl that she is trafficking from Lithuania to London is pregnant.
READ REVIEW
Next Previous 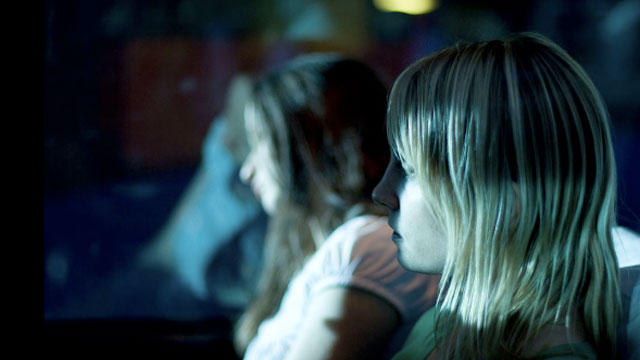 Opening in a grim, disused warehouse underscored with the sobs and muttered pleas of partially stripped, terrified women, comprising an inspection line, Echoes makes it plainly clear we’ll be spending the next 12 minutes in the dark depths of a world the majority of us are fortunate enough to never have to consider. The trafficker’s greeting of, “Welcome to London!” holds only malice and misery for these women: poor, desperate or over-trusting enough to find themselves as the cattle in a market that values them solely for what their bodies will fetch.

Bournemouth Film School graduate Rob Brown’s short takes a slightly different tack to other sex trafficking films you may be familiar with, such as Lukas Moodysson’s Lilya 4-ever. Instead of cataloging the indignities no doubt in store for victims of the forced sex trade, Echoes focuses on Anya, promoted from sex worker to trafficker, and her journey from Lithuania to London with the innocent (and secretly pregnant) Liliana.

Given that a large chunk of Echoes unfolds within the confines of the coach transporting the women across Europe, Brown and cinematographer Justin Brown make effective use of the handheld camera, capturing everyday locations in muted tones which reflect the film’s bleak world. I had initially presumed the decision to go handheld may have been born out of a necessity to steal shots in the London Underground, but as (I later discovered) Echoes was shot on Super 16 its more likely that this was solely a stylistic decision – one which completely works for the narrative and atmosphere of the film. The final shot of Anya, now boxed in by her decision to let Liliana go free, with nowhere to go except down the dark corridor that stretches out behind her, is particularly foreboding.

Ultimately Echoes is a film about the willingness to sacrifice the future of others to secure your own position – a sacrifice Anya is unable to make, despite the hell that awaits her.