Oscar is coming of age, against his better judgment. In doing so he must experience the necessary evil of leaving something behind, but he can still feel it in the pit of his stomach.
READ REVIEW
Next Previous 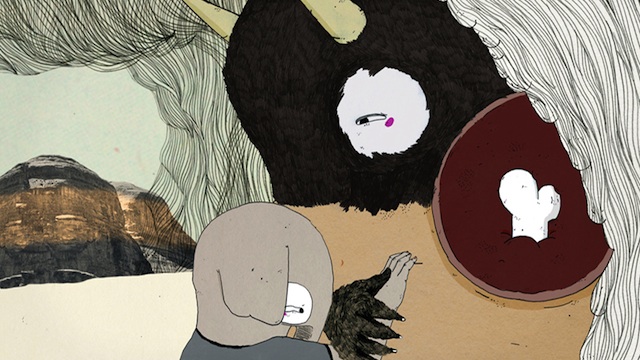 Belly. It’s something of an old-fashioned word. Not anachronistic, but out of the common vernacular; reserved for folk-sayings like, “In the belly of the beast” for when you’re in the thick of danger, or, “I feel it in my belly” referring to that sure knowledge coming from intuition.

Animator Julia Pott, a 2011 SotW Award Winner, Sundance 2012 alum, and a freshly declared 25 New Face of Film by Filmmaker Mag, made Belly as her graduation film from London’s Royal College of Art.  The film debuts online today, and with it she supplied the film with a tagline that neatly combines the two popular usages above. “I feel you in my belly.” The line perfectly encapsulates the careful and evocative subtlety of the Julia’s work. In her world, and in ours I think, interpersonal relationships ARE dangerous, fraught, and filled with epiphanies and realizations we feel down to our guts, even if we don’t fully accept or comprehend them. “Belly” implies something deep, covered, hidden, and teasing out that truth from characters has been a defining characteristic of the Ms. Pott’s work.

Belly is similar to Pott’s oeuvre thematically, but quite a departure functionally. Pott has never been that interested in plot, instead being more preoccupied with evoking interior states. That’s why her past work, including commercials for Toyota and MTV’s Liquid TV, have drawn upon the use of documentary interviews. Blending direct confession with her trademarked illustration style of cute, anthropomorphized animals allowed surface biases to be displaced, freeing the emotional core of personal stories to be more easily recognizable. Belly, however, is wholly scripted, and as a result, for perhaps the first time we are afforded a direct glimpse of Ms. Pott’s preoccupations.

For a young woman who works in style so easily dismissed as precious, it is not surprising that in Belly she opts to explore transitional states of childhood. Oscar and his brother Alex go the beach. Alex is the aggressive older brother, the one who works very hard to keep Oscar in his place, telling him that he isn’t old enogh to go for a swim with him. Oscar however has a companion of is own, a “monster” who loves him and remains by his side. When Alex gets in trouble, it is up to Oscar and his monster to rescue Alex, but what Oscar gains from the experience in terms of maturity and Alex’s respect, is offset by loss. Is the tradeoff worth it?

In terms of plot, the film is thin, and more likely to provoke questions than answers. What is the nature of Oscar’s monster? The opening of the film sees Oscar creating small animals while riding the monster’s back, but, while riding home on a dolphin, his movements only leave a scratch. Is the monster representative of the free and playful imagination of childhood, something we slowly lose through maturity? Is the monster himself imaginary? Symbolism abounds, and Belly is a difficult piece in that sense. The focus on Oscar upset me the first time I watched the film, as the selflessness of his monster felt undeserving of Oscar’s readiness to discard him.  Yet, in discussion with others, I was surprised at how varied their reactions were.

It is frustrating when done sloppily, but this deliberate indeterminacy is often a necessary component of great films. And, in Belly, it is certainly effective. While watching I was reminded of the way that I abandoned my childhood friend when I arrived at middle school, opting instead to hang with a “cooler” crowd. It is something I’m still ashamed of. Did Ms. Pott have this kind of situation in mind when writing the film? Probably not, but her knack for spare landscapes of feeling and her sensitivity to tiny communicative cues within her animation, create an overriding mood of nostalgic loss that permeates the film. It is a rare gift, and the result of this talent is a film that I imagine many people will take to in very personal way.