When we talk about mental health, the focus of those discussions usually orbit around the problems associated with it – something that has been given additional attention in the context of Covid and the repercussions of the pandemic. The events of 2020/21 have shone a new light on how important it is to maintain one’s own mental health and what all of us individually, and collectively, need to stay sane. It’s also important to emphasize that talking about mental health doesn’t need to be negative, in fact, everyone benefits from improving their mental wellbeing and taking a look inside themselves every once in a while.

At S/W, we wanted to use the Mental Health Awareness Month of May to emphasize the importance of the topic, through the medium we know best: short film. This isn’t an article about statistics or ways to improve your mental wellbeing (although we would argue that watching shorts always improves our lives), but about the connections we can make through these depicted stories.

It’s often hard to talk about mental health issues, for a number of reasons. On the one hand, there’s still a stigma associated with various forms of mental health problems and their potential treatments (an attitude that can often detract people from the help they need) – such as depression and going to therapy. On the other hand, another factor that makes it particularly hard to communicate one’s own struggles is that they might be hard to fathom for someone who has never experienced them before. This is why the power of great storytelling is so valuable in illustrating these experiences and fostering understanding, without turning into PSA-like morality tales.

Filmmaker Nate Milton created short Eli as a form of self-therapy after being diagnosed with bipolar disorder.

The strength of short films comes in their ability to drive home a point without the need to stretch narratives or adhere to story conventions. Often they even forego typical narrative structures altogether, giving filmmakers the ability to break down situations and internal processes to capture an abstract feeling – something that wouldn’t seem possible under more conventional methods.

For those suffering from mental health issues, the feeling is very precise and sometimes unbearably intense. But the moment you want to convey the sensation, it feels abstract and hard to pin down. Maybe this is the reason why documentaries about mental health can indeed communicate the experiences and ramifications of dealing with them, but the actual feelings of this very internal process are better captured and illustrated through fictional treatment. Allegories (The Voice in Your Head), visual superelevation (The Distraction) or even dark comedies (sometimes I think about dying) are often more precise in their visualization than a sober depiction of certain topics and their facets. 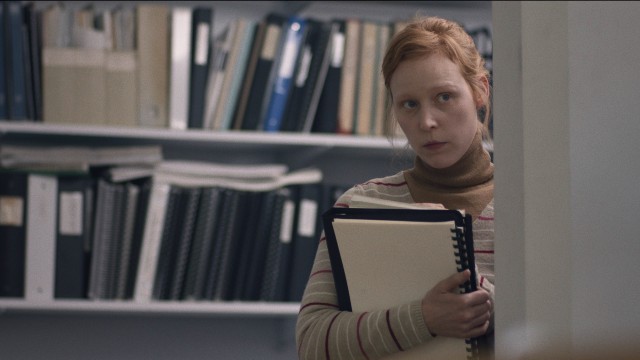 At the same time, it would be difficult to sustain the visualization of internal processes throughout a longer form, which is why feature films often focus on the external factors and consequences, often turning them into problems that either lead to a downward spiral or to something that can be overcome through a classic hero’s journey. This oversimplification can be counterproductive for both parties, those who want to feel seen and those who want to use films to better understand experiences beyond their own reality.

For those of us who have been dealing with mental health issues or are currently struggling with them, stories let us know that we are not alone. We feel that there are other people out there like us, that we are understood and seen–and maybe these stories even provide hope or hint at possible solutions. Always remember: “It’s okay to not be okay. It’s okay to talk.” Though we don’t claim to cover every aspect of mental health in this playlist, the selected examples manage to tackle a number of important issues, through various genres and forms, in the hope of broadening understanding and inspiring conversation. Enjoy.

Although not created specifically to tackle themes of mental health, Karia’s 12-min experimental short forces its viewers to spend time in the company of someone you would usually avoid – that person you encounter who is behaving outside the norms of what you typically deem “acceptable”. A physical film that impacts to the very core, BEAT will have you reflecting on your own social interactions and considering how you respond when next confronted with someone society might see as slightly “different”. – RM

But Milk is Important by Eirik Grønmo Bjørnsen and Anna Mantzaris

Eirik Grønmo Bjørnsen and Anna Mantzaris’ stop-motion animation But Milk is Important literally puts a face on the feeling of social anxiety. Although it is not quite clear if the feeling itself is the monster or if you are your own worst enemy in overcoming your fears? As with any severe mental health issue, one of the most frustrating things someone can say is to “just cheer up” or as in this case, “just go out and talk to people.” As the film shows us, you can’t outrun your problems. If you don’t face your issues, they will follow you wherever you go. But ultimately, every tiny step counts. Who knows, maybe someday the monster will leave you alone after all. All it takes to get started is the willingness to get better.

Opening with a scene where a man attempts to hang himself in his untidy living room, Saville’s 13-minute dark-comedy Dive initially feels as if it’s going to be another trite depiction of depression and grief. As things progress, and the film delves into weirder territory, it cleverly transitions into a surprisingly inspiring watch about a man fighting to find and save himself by finally facing up to his fears. Taking a more abstract approach to storytelling and employing some excellent FX work, Saville succeeds in his aims of creating something that tackled dark subjects but left his audience with a positive, uplifting experience. – RM

Although it is classified by its creator Nate Milton as a work of science-fiction, animated short Eli is very much ground in reality, as it was made as a form of self-therapy for the director, who was struggling with his mental health condition. Made after her was diagnosed with bipolar disorder, the filmmaker reveals he had high hopes for his 11-minute short: “I want to get the conversation started earlier about mental illness, especially with high school kids. I got diagnosed at 30, if I had answers at 17, it would have been very helpful”. – RM

Inspired to create her animated short Isle of Chair, after she witnessed both friends and family suffering with mental health problems, Chen hopes her meditative piece will help viewers find a brief moment of comfort and peace. Focused on a strange island, largely inhabited by abandoned furniture, the filmmaker used upside-down, dysfunctional and broken chairs to represent how “mental health was defined as an abnormal state by society”. Much like BEAT, the film is interested in showing how things that at first seem different or strange, shouldn’t be viewed that way and in creating her film, Chen admits the process helped her through her own “difficulties in life”. – RM

Joy in People by Oscar Hudson

Loneliness and isolation can be key contributors to mental health problems and though Oscar Hudson’s Joy in People doesn’t tackle a specific affliction in its storyline, its tale of a man looking for a sense of place and belonging resonates strongly to these themes. As we follow its troubled protagonist Ben, as he searches out crowds of people to join (after being told that “there’s joy in people”), the film dances around notions of religion and nationalism with its almost documentary-like approach. However, feelings of self-contentment and identity are ever-present and as we join Ben on his journey to feel a part of something, you can’t help but reflect on your own place in this world and your own sense of inner peace. – RM

sometimes, I think about dying by Stefanie Abel Horowitz

It is no easy feat to shine a light on suicidal tendencies without coming off as insensitive or cynical. The reasons for why Stephanie Abel Horowitz’s sometimes, I think about dying succeeds so well are manifold: For one, there’s the perceptive script and the perfectly subdued, courageous performances that nail the delicate balance between the film’s very dark, dry humor and the serious subject matter at the core. In turn, sometimes, I think about dying is grounded in a deep understanding for its characters and an empathetic take on depression. What we get, in effect, is one of the most idiosyncratic movie romances of the last few years. Abel’s film is a testament to the notion that we are all worthy of love and sometimes the thing that might help the most is to share your innermost thoughts with someone you trust.

When we featured Terrance back in 2014, director Joris Debeij had this to say about the film: “I think it is hard for anybody really to talk about depression. There are a lot of complex and abstract feelings and thoughts that make it hard to match with words.” That sentiment still rings true today. And while portrait docs like this, featuring thoughtful off-screen commentary and beautiful images, have become a dime a dozen in the last few years, Terrance’s introspective descriptions and Nate Hurtsellers’ elegiac cinematography haven’t lost any of their power.

The Distraction by Matty Brown

Have you ever felt like everything is just TOO MUCH? That’s the feeling that the filmmaking style of Matty Brown’s The Distraction emulates, in order to drive home a feeling of inner turmoil, which is often hard to put into words. Mixing forms from video-essayistic tone poems to faux-documentary and horror, this 10-min experimental short is more interested in capturing the emotions of what it means to have depression or an anxiety attack, rather than forcing it into a narrative construct. As the images and sound design become more unhinged and the film borders on surrealism, the insights into what it feels like to wallow in dark thoughts are as real as it gets.

The Voice In Your Head by Graham Parkes

“You’re not good at anything. Nobody likes you. Everything sucks.” Why would you spend any time with someone who keeps repeating these mantras over and over again? Yet, when we think these thoughts to ourselves, it seems like it’s just normal self-deprecation. Graham Parker’s painfully funny The Voice in Your Head takes this concept to its logical conclusion, with a twist, personifying the protagonist’s constant doubts and fears. In reality, these nagging insecurities are as real as if they were standing right in front of you. So the next time you put yourself down, just remind yourself what it would be like if someone else treated you this way.

***
For more on Mental Health Awareness Month (including what you can do to help) visit the Mental Health America website. If you’re dealing with a mental health issue and need help, we hope the following resources may be of assistance: checkpoint.org: An international list of emergency numbers & websites | opencounseling.com: An international list of suicide hotlines
LIKE TWEET