An internet breakout filmmaker + a rising fashion designer with tons of celeb friends = an adorable fashion film about love.
READ REVIEW
Next Previous 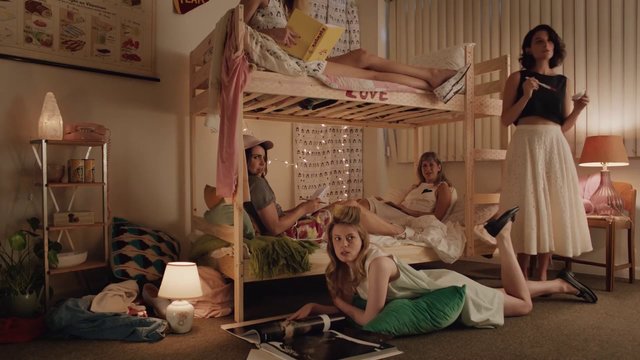 In spite of previous statements I have made decrying the devolution of the fashion film genre (which I generally stand by), the high points of fashion film in 2013 were quite high. Roshambo instantly enchanted audiences and marketers alike (New York production companies are being inundated with brands referencing the film in their RFP’s), and Wes Anderson, in his inimitable way, almost singlehandedly validated the trend of hi-profile filmmaker collaborations (sorry Marty).

Giaever is an inspired choice, and may not be unknown for long. A recent grad of Middlebury College, she got first noticed when Vimeo Staff Picked Holy Cow Lisa, a documentary that presages many of the themes of Crush. That film, with its elderly romantic subject waxing nostalgic about youthful love, was much more of a straight documentary however, in spite of the innovative comedic sensibility and charmingly lo-fi cutaways that Giaever incorporated. The film that made a real splash came out 1 month later, when the Scared is Scared, went viral on its way to well over 1M Vimeo views, eventually earning a spot of Vimeo’s Top Ten of 2013 list (note: a list I helped pick) as well as earning Video of the Year from USA Today.  the Scared is Scared is the second component of Crush’s DNA, where the concept of  humorous dramatizations of unscripted audio fully took root, borrowing some the perplexed interactivity between the actors and narration that Drunk History utilizes so well (Derek Waters actually has a small role in Crush!).

Here, with a real budget, and, of course, awesome set and costume design, we see that Giaever’s point of view has real legs. The story, the comedy, all hit. Indeed the comedic use of editing to really sell beats of awkwardness are really reminiscent of Max Joseph‘s work—a sensibility we much admire. Gillian Jacobs (Community) puts in a bid for the Short Film  2013 All-Star Team if you consider her role in It’s Not You It’s Me as well, and Jack Antonoff, Rachel’s brother and member of the band Fun, shows surprising acting chops as the dad.

Rachel Antanoff has injected humor and fun into the sometimes deathly serious world of fashion, and we’re grateful. Crush does not need to be graded on a curve however, it is a lovely short film on its own merits, a greatly enjoyable watch, and hopefully will act as another stepping stone for Giaever, a web native filmmaker with a strong point of view—exactly the type of filmmaker we love to support and trumpet. Follow Bianca on Facebook