The latest entry won Sundance this week. Get caught up from the beginning! Learn History! Drunken History!
READ REVIEW
Next Previous 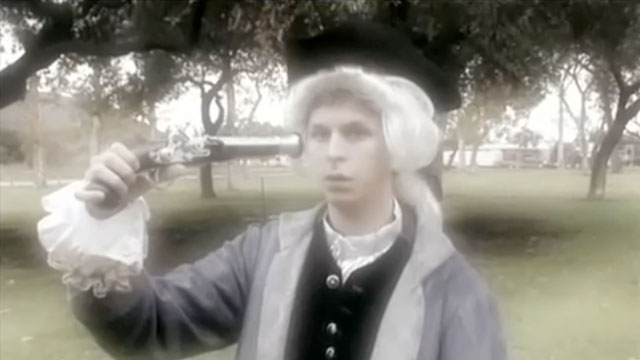 Et tu Sundance? Has the glory of short film been inexorably vanquished by the web series? The cinematic grandeur of something like Sikumi, to be forever replaced by poor-production value viral comedy?

Earlier this week, the venerable festival bestowed its favor—the coveted Jury Prize for short film, upon Drunk History Vol. 5: Douglass and Lincoln. The previous iterations of this series have gained great fame on the interwebs via YouTube and Funny or Die, but, as the vol. 5 in the title suggests, it really has more in common with what we think of as a web series. Linked by a central premise, the filmmakers record drunken historians rambling about key moments in US history. Celebrities then act out the narrative in hokey costumes, with the filmmakers using self-reflexively ridiculous sets and edit techniques, to, admittedly, riotous comic effect.

The two newest entries which took Sundance by storm, the jury prize winning Douglass and Lincoln, plus one about the tragic life and times of Tesla, are not available, so we start instead at the beginning. Performed by a wasted Mark Gagliardi, Vol. 1 recounts that most famous of American duels, Hamilton v. Burr, with Michael Cera and Jake Johnson taking on the parts of the long-dead politicians.

There is a charm to the sets and anachronistic details of the approach. The radiant soft focus glow as faces emerge from the shadows is a spot-on mockery of the History Channel aesthetic, and Michael Cera’s Vans inexplicably crack me up. These two forces complement, as the parodying faithfulness to the form of historical re-enactments is undermined by out-of-place details. By far though I think the key element of comedy is the literal interpretation by the actors of the narrator’s words, which leads to some great moments such as “Alexander Hamilton shot a bullet right into Alexander Hamilton”. Don’t forget that our poor historian is blitzed, so fun slips like these are fortunately inevitable.

I like Drunken History, I wouldn’t give it a coveted feature on the site if I didn’t, however I am a bit worried about what institutional approval for a web series from something like Sundance means for Short Film. Often I look at web series and viral vids as in competition with short films for eyeballs and buzz. As unfriendly as festivals have been to the web, we don’t want them to jump ship, abandoning their traditional role as shepherd of short films. Sundance has self-consciously tried to make itself younger, more independent, and more web-savvy this year, embracing YouTube for shorts and rentals, so I do not think it is a coincidence that it was this year that a project like this broke though.

It helped though that it was Derek Waters who was involved. A Sundance alum, he had previously come to Park City with Derek & Simon, a web series he co-created with Mr. Show’s Bob Odenkirk, that had a famous run on the now-defunct Super Deluxe web site. Be warned Short Film, you’re already losing the web, now your festivals are targeted. Talent in web video is rising, and Drunk History’s creator is leading the charge.