1940's visual styling combines with a futuristic setting in this sci-fi take on the hardboiled gumshoe. Now in development as a feature.
READ REVIEW
Next Previous 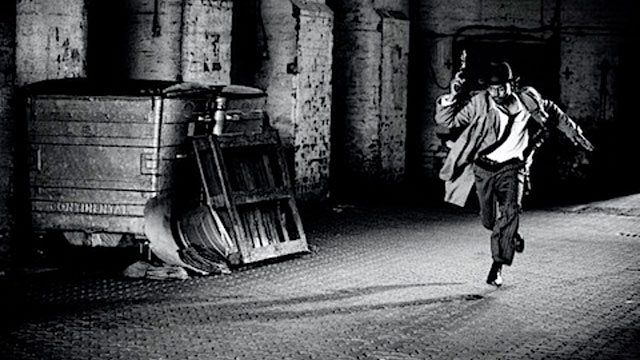 Over the last several months Reign of Death has been a viral hit disguised as a festival film. Or did I get that backwards? It has been touring the UK’s film festival circuit, most recently playing Sci-Fi London, however with its easily digestible length, showy VFX, and cult-fave leading actor (Dr. Who’s Noel Clarke), I can’t help but feel its manifest destiny is to dominate the web in the tradition of recent short film internet faves, The Raven, The Gift and Panic Attack.

Noel Clarke plays the fedora and trench coat wearing “gumshoe” in Reign of Death, hunting down a “rat”— in this case a rather retro-styled robot. A woman has been murdered making for front-page headlines in the town, and the two characters end up having a showdown in the same alleyway where she met her end.

The action in the film itself is not the most dynamic as the editing is slow and a couple of shots seem somewhat clumsily executed, but as mentioned the VFX are astounding and create a look very faithful to the film’s classic references. A VFX breakdown has been posted by the man in charge, Linus Hofman, which shows the extent to which CG additions are able to transform real-life locations into the grimy, dark, yet fantastical backdrops of the film’s action.  The result is a look very similar to two features of the past, Sin City and Sky Captain and the World of Tomorrow, which used extensive virtual sets to achieve a retro-look.

That said, we have seen numerous examples over the past year and half of increased sophistication in CG/live-action incorporation from the amateur set, and while Reign of Death at its heart prioritizes aesthetics, the film distinguishes itself by having an honest-to-god story unfold in its 6 min runtime. Short film aficionados know that 5 minutes is plenty of time to tell a complete story, however several writers of recent calling-card pieces seem to have forgotten this. Director Matthew Savage though displays a good handle on the story, having elements unfold slowly—well, as slowly as one can in such a short piece—and manages to employ a few traditional short film tricks to joyfully upend expectations, including a late twist.

Produced for BBC’s Its My Shout, yet another UK short film scheme (does the government there never get tired of being so damn supportive?), Reign of Death is an enjoyable watch that has all the elements to succeed in attracting widespread interest. Even though it has yet to make its presence felt online, the traditional path has proved effective for it, as its star and director are now developing a feature adaptation. Placed online last month by Sci-Fi London, catch this short while you can.