A meteorite encounter causes a man to exist 91cm from himself in this beautifully haunting illustration of a self-destructive mind.
READ REVIEW
Next Previous 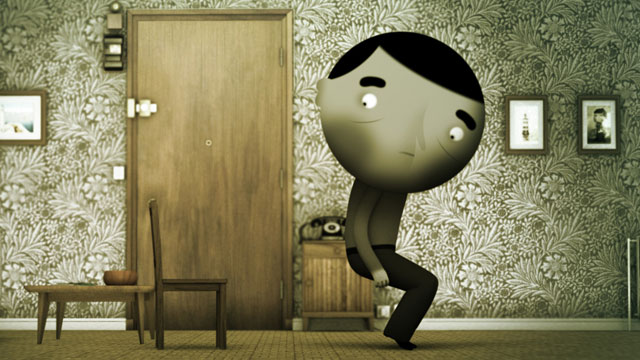 Drama about The Mind in 3D Animation
Made In France

With Skhizein we have the triumphant return of Jérémy Clapin, featured before on SotW with his film Une Histoire Vertébrale. This time he arrives with many more plaudits to his name; Skhizein won the audience award at Annecy, the Kodak award at Cannes, and just recently took home “best short” at the Manhattan Short Film Festival: the first time an animation has taken that prize I believe.

Skhizein begins with a fairly odd premise to match its odd name. In an interview Clapin says the word derives from the Greek, meaning “to split” or “to cleave”sharing that root with schizophrenia. Adhering to that concept, early on our main character comes face to face with a meteorite, the aftermath of which causes him to exist exactly 91cm from himself. In practice this means that when he sits down he looks as though he is floating in the air because his visual presence is 91 cm away from the chair itself. This is a cause of consternation for our hero, as one might expect, and the early part of the film relates our character’s attempts to cope.

Clapin has improved his technique from Une Histoire…, Skhizein is a huge leap forward for the French animator in regards to design, background detail and character movement. This is surely a large component of why the film has experienced such success. Similarities between the two films though exist. The two films share a limited color palette and a central concern: an examination of outsider figures, whose deformitiesphysical or

mentalkeep them from being in harmony with their environment or with others. However, Une Histoire… developed its joke in a relatively lighthearted, rom-com fashion, leading to a telegraphed happy ending that contributed to why I did not care for it very much. I expected similar of Skhizein, and was actually frustrated during the viewing process by little things I chocked up to sloppiness; examples of continuity errors where the character did not abide by the conceit of the film for example. However Clapin takes the film and its character in a direction far different than I expected, and really caused me to reevaluate my initial impressions afterward. Many of the things that bugged me I now believe to be intentionally woven in to foreshadow the climax. Strange though it may be, the film is aptly titled, both for its character and for its audienceas my expectation of the film and perception of its story while viewing, ended up being quite split from the emotionally resonant statement Clapin had in mind.