The most acclaimed student work of the decade is this post-apocalyptic CG action short out of UCLA, which won the director the right to adapt it to the big screen.
READ REVIEW
Next Previous 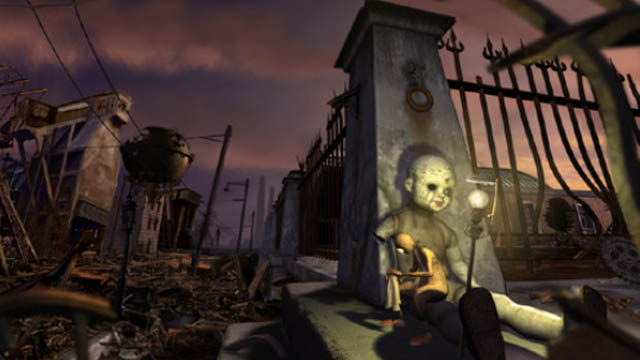 So call me “Captain Obvious”. I pride myself in thinking of this as a site to find rare stuff not provided from a million other sites, but hey, we reviewed the short film that the season’s other  no.”9″ sci-fi film was based on, it only seemed fair to extend the same courtesy to Shane Acker. Besides, for this, our last entry in our Student Film Series, how could we neglect the most illustrious of all? Let’s not kid ourselves, when it comes to student short films, what other work in recent memory can even come close to the superlative accolades heaped upon this little flick? SIGGRAPH, Student Gold, an Oscar nom—those are big honors. And just to be clear, it isn’t normal for Hollywood superstars (Tim Burton and Wanted director Timur Bekmambetov) to descend upon a student filmmaker and offer to shepherd them in directing a feature-film adaptation.

To see it is to know why. 9 blows away any expectations you have for a student film. The film images a post-apocalyptic future. An animated rag-doll with the number “9” on its back scavenges along in a human-free landscape. Through flashback we see 9’s encounter with “5”, and how they both fought against a giant mechanical monster that ends up stealing 5’s soul, making him inanimate. In the present again, 9 must confront this monster if he wishes to keep his own life.

Serious stuff no? It’s strange, but even in the realm of short film which rewards experimentation and risk-taking, the cartoon legacy of animation has really made this form of dark and mature CG a rarity. There is a sense of adventure in the thrilling chase sequence roughly half-way through the film, but also a palpable terror. Going through our own archive I cannot find an entry that compares. And yet the film is not simply a cut-scene from a horror video-game. The more I think about it, the more it strikes me that 9 is truly a unique hybrid in terms of the tone it strikes. The wide-eyed and appealing character design of our rag-dolls is very innocent, and the even the monster, horrifying as it is, wearing the skinned bodies of 9’s fallen comrades as a coat, looks actually kind of like a dog. A child could watch 9 and not suffer nightmares.

This is what I imagine Tim Burton saw that appealed to him—9 can appeal to a wide-range of audiences. It’s a gritty post-apocalyptic film for kids, that doesn’t pander or soften its scares. It hearkens back to better era of children’s fare, movies like Labyrinth and The Dark Crystal that freaked me out as a kid.

Questions of the upcoming feature aside though, the short itself is technically brilliant in both story and execution. The enabler of this is the running time. 10 minutes is quite an undertaking even for a UCLA MFA capstone project.  Not to denigrate another awesome film, but because of the shared conceit of an animated doll, the comparison to Sebastian’s Voodoo, a super-acclaimed student animation from last year, came to mind. That film, while superior in some ways in beauty and detail, is less half as long as 9, and enjoys a fixed setting, whereas 9 gloriously follows its character across vast changes of locales as he flees from the beast that is hot on his trail. In interviews Acker credits his background in architecture for giving him the grounding necessary in 3-D modeling to pursue a more expansive story. Likewise working for WETA on the Lord of the Rings movies is a good way to develop chops that exceed the average student. It pays off in that 9 feels like a story, rather than an idea, or joke, or twist—devices that shorter films often must adopt.

Watch the short film now, and in less than the two weeks the feature film will be out in theaters. Based on this I will certainly be there.