Two star-crossed octopuses put their tentacles on the line to save each other from a tasty demise.
READ REVIEW
Next Previous 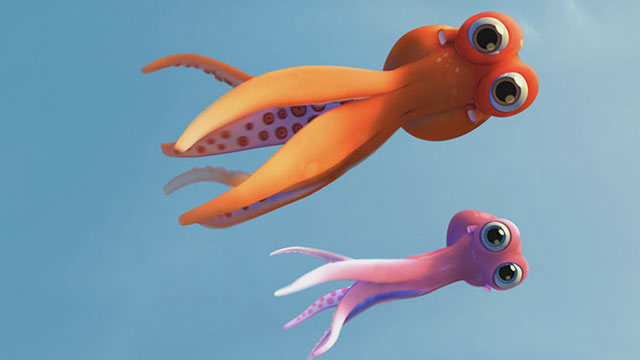 When Meatloaf said he’d do anything for love, I’m guessing that a whirlwind pursuit through narrow cobbled streets, hand-to-tentacle-to -windsheild wiper combat and pool to pool flits that would put Ned Merrill to shame weren’t at the forefront of his mind, but these are the trials that a pair of love struck octopi are prepared to overcome when one of them is snatched from their tank of bliss and sentenced to be sliced, diced and served.

With as many directors as arms of one of its plucky stars, Oktapodi is the rightly lorded Gobelins L’Ecole de L’Image 2007 graduation film from Julien Bocabeille, François-Xavier Chanioux, Olivier Delabarre, Thierry Marchand, Quentin Marmier and Emud Mokhberi.

There’s certainly a lot to love about Oktapodi. For one the vibrantly designed, wide-eyed octopi lovers and expressive restaurant cook nemesis are fantastically realised. Also, this two minute tale doesn’t waste a single second of screen time or animation resource with anything that doesn’t push the story along and fully entertain whilst doing so. Within the first 20 seconds, the motivations and stakes of the coming pursuit are well and truly set, so we can settle down to enjoying the slapstick set pieces as they rapidly unfold.

In an interview with CG Society, co-director Emud Mokhberi said that the two minute running time was a limitation set by Gobelins to enable students to complete their work at a reasonably high quality, within the alloted production time. Once they had the story in place, the team however took that limitation and used it to build an increasingly frantic pace which composer Kenny Wood’s score beautifully brings to hectic life, especially as the film is completely dialogue free.

Amongst its many awards, Oktapodi went on the win both the Audience Prize & Best in Show at SIGGRAPH, along with the Canal+Family Award (Student Film) at the Annecy International Animated Film Festival in 2008 and was also nominated for an Academy Award in 2009.

Check out Oktapodi.com for a detailed making of video.