Crippled with chiropractic problems, this sad, young fellow with big dreams struggles to meet that perfect someone that just fits.
READ REVIEW
Next Previous 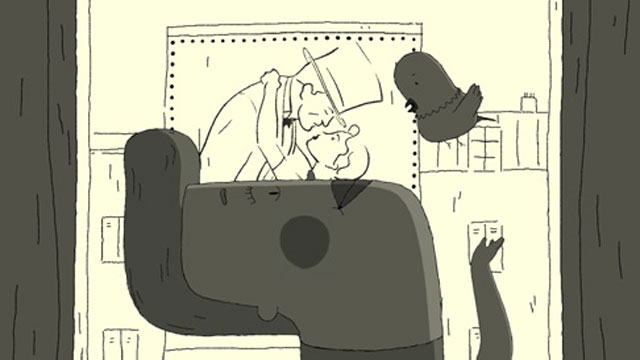 In the eternal race to find love and happiness, some unfortunate souls start with a handicap. It is so in the case of the man we join as we jump-start into Une Histoire Vertebrale (A Backbone Tale), a short animated movie by Jérémy Clapin, produced by Strapontin.

A malformation of his backbone forces our hero to walk with his head held low, permanently fixed toward the ground. How is he supposed to search for happiness, his loving one, when all his eyes catch are his own feet? And who’s going to love him- someone who looks so different from others?

Storywise, what makes the difference between the work of Jérémy Clapin and other similar stories (I’m thinking of An Eye For Annai and Hedgehug) is the encounter with the “similar and complimentary.” Rather than being the resolution of the story, it’s the starting point of a process that brings the man and the woman (and hopefully us with them) to learn a valuable lesson.

From a visual point of view, the 3D graphics are employed to give the main characters a more distinctive aspect, with a final result that looks like traditional animation, in a similar fashion to The Pearce Sisters (my last pick, which also shares a near total absence of dialogue). What we see and what we don’t is spoken loudly through the characters’ actions.

Setting the mood for the entire film (with help from the beautiful score by Nicolas Martin) is the first sequence of the movie—a splendid example of Clapin’s style. We’re presented with many couples in love, with none or few distinctive characters, composited like a sort of diorama. They pass in front of our view like a merry-go-round, and when the last couple breaks from their kiss, our hero appears, as from behind the curtain of our oblivious daily existence. Everything makes him stand out from the crowd: his backbone, his loneliness, and his tri-dimensionality (compared to the flatness of the other characters). The sequence fades to black and into the main titles. Only twenty seconds ago we hit the play button, and we’re already helplessly captured by the charm of the tale.

On a personal note, I completely agree with the sense of the story, or at least what I perceive it to be, but I’ll leave you to discover it for yourself. Or… just enjoy the show. That is, after all, why they call it a show.