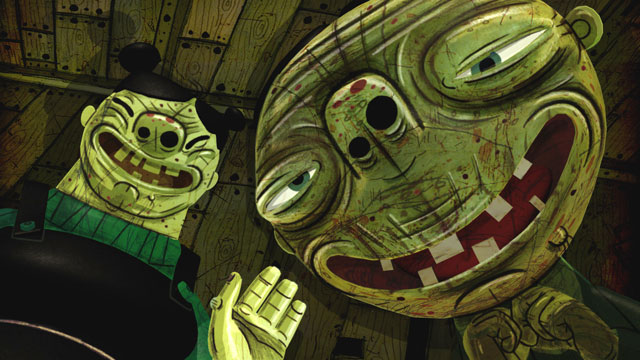 In the words of its makers, The Pearce Sisters—a short film based on the story by Mick Jackson and produced by Aardman Animations—is “a bleak hearted tale of love, loneliness, guts, gore, nudity, violence, smoking and cups of tea.” And you know how well tea parties and loneliness mix. Enter the sisters, Lol and Edna Pearce.

Living “a miserable existence on a remote and austere strip of coast”, the two old spinsters are eager to find company, with the complicity of the sea. Possibly male—handsome—grateful? Though they’d hardly win the heart of any living man, The Pearce Sisters won Best Short Animation at the 2008 BAFTA Awards.

Director Luis Cook has been at Aardman Animations since 1994, but this is his first (second, if you count the title sequence for the London Film Festival) non-commercial work. At a time when beauty often seems less exploratory, and more of a formula, it’s refreshing to see a film dive into the aesthetics of ugliness. With every detail in every scene transporting us into this parallel universe born from Luis Cook’s mind—a world both austere and humorous at the same time. As my friend Mike appropriately asked, “If the sisters had only gotten a bikini wax… would things have turned out different?”

One can only guess.