Short of the Week alums Dan Ojari (Slow Derek) and Mikey Please (Marilyn Miller) have revealed they’re hoping to find the “right home” for their latest project Alan the Infinite, as they unveiled the film as part of the UK Shorts program at the 2019 edition of Sundance London.

Created under the Parabella monicker, the animation studio Ojari and Please launched in 2014, Alan the Infinite is a pilot episode for a proposed 12-part mini series the duo are hoping to develop.

Taking a high-concept idea about a shape-shifting force and setting it within the unusual environment of a lamination company, Alan the Infinite is a short full of heart and absurd humour, charmingly executed in stop-motion.

“It’s limboing between being a short and an episode”

Starting life as “a collection of short sketches in Dan’s bottom drawer”, Co-director Please revealed to S/W how they took those initial drawings and expanded them into something with series potential.

“In Alan and the Atom an office worker peered beneath a filing cabinet, poked a mysterious atom, then wafted away the resultant miniature nuclear explosion”, he explains. “Together, we took that nucleus, stamped on it, spread it out on the floor and built on its back a world filled with characters and meaning and stationary.”

Alan the Infinite was conceived as the pilot for that project, but it works on its own nonetheless. “It’s limboing between being a short and an episode”, Please told S/W, “for us, it works as both.” Production hasn’t yet started on the next installments, since the duo are looking for distribution for the standalone film, as well as partners for additional episodes. Here’s hoping they will find the muse and money to continue work on the project.

“We finished Alan the Infinite mere weeks ago, so the plan is now to show it about to people and hope that there’s someone out there who gets it”, says Please. “For them to give us a heap of money. For us to make some more. But we’re not in a crazy rush, we want to find the right home for it. We’re also mid-production on two other long-form projects at the moment, so we’re happy for Alan to take his first tentative steps into the world, and see where he goes from there.” 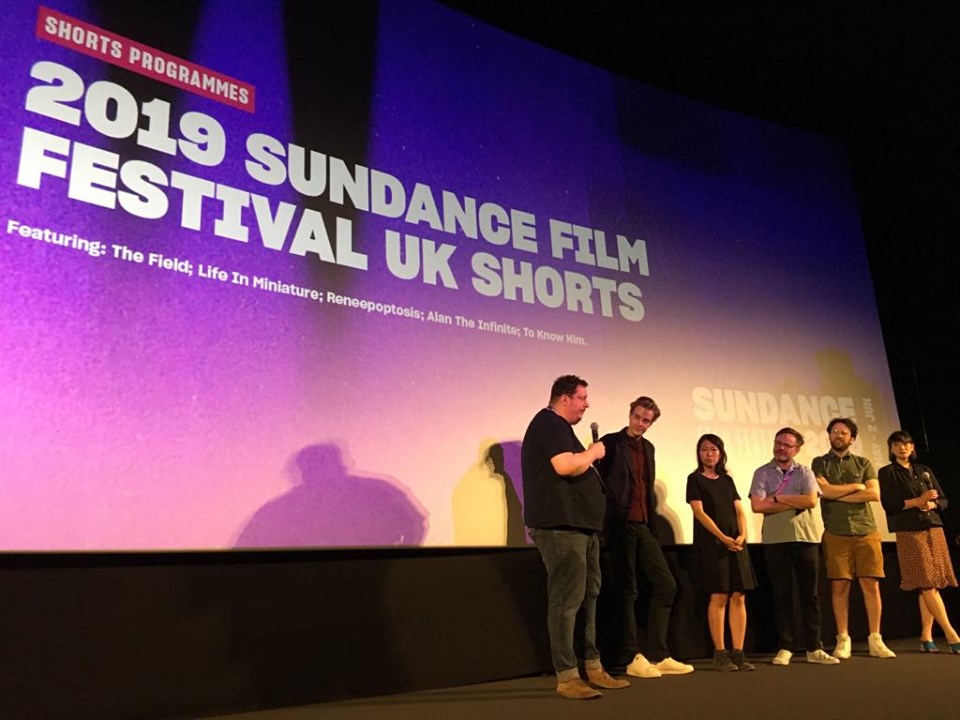 Asked about what it means to have Alan the Infinite screen in the UK Shorts program at the 2019 Sundance Film Festival: London, co-director Mikey Please’s cheekily replied: “It means we don’t have to travel to Utah for the joy of seeing [Senior Programmer] Mike Plante.“

The 10-minute animated short is a deeply personal examination of existence and self-doubt, full of idiosyncratic storytelling choices, in style as well as narrative approach. “I tend to work more from images that appeal to me than from structure or story”, Renee Zhan related to S/W. “I first imagined Reneepoptosis as a classic Hero’s Journey, where three heroes set off a quest to seek a goal, and in doing so, learn something about themselves.”

At the Q&A, Zhan talked about how a year alone in Japan, without being able to speak the language, and a two month hike from Tokyo to Kyoto, informed the idea for the film. The resulting loneliness and self-indulgence are at the heart of Renepoptosis, which she again worked on alone for months.

Probably nothing sums up this process and the finished work better than a quote from Reneepoptosis itself: “When you start to consume yourself, it’s when you realize how lonely you’ve been.“

“In all my films I tend to explore personal topics”, explains Zhan. “I don’t really know where else to get subject matter from! It’s nice in a way because I can look back on the few films I’ve made as a sort of diary of my thoughts and emotions at the time. With my previous films, I was always asked “Is that character based on you?” The answer is usually yes, so this time I just decided to make it explicit.”

Aside from the UK Shorts program, the Short Film Tour 2019 showed a variety of genres and styles from all over the world and kicked off with S/W alum Stefanie Abel Horowitz’s (Up North) Sometimes, I Think About Dying: a melancholic, darkly comic look at a woman who catches the fancy of one of co-workers. Due to her own self-doubts and fatalistic worldview, it’s hard for her to fathom why this man, or anyone for that matter, might actually like her.

Featured image: Alan the Infinite by Mikey Please and Dan Ojari, an official selection of the Shorts Programs at the 2019 Sundance Film Festival. Courtesy of Sundance Institute