Flap flap flap flap. A large bird and a small boy cohabit in an unhappy relationship, trapped by four walls and a mutual codependence. The fragile balance of their relationship is cracked by a new arrival.
READ REVIEW
Next Previous 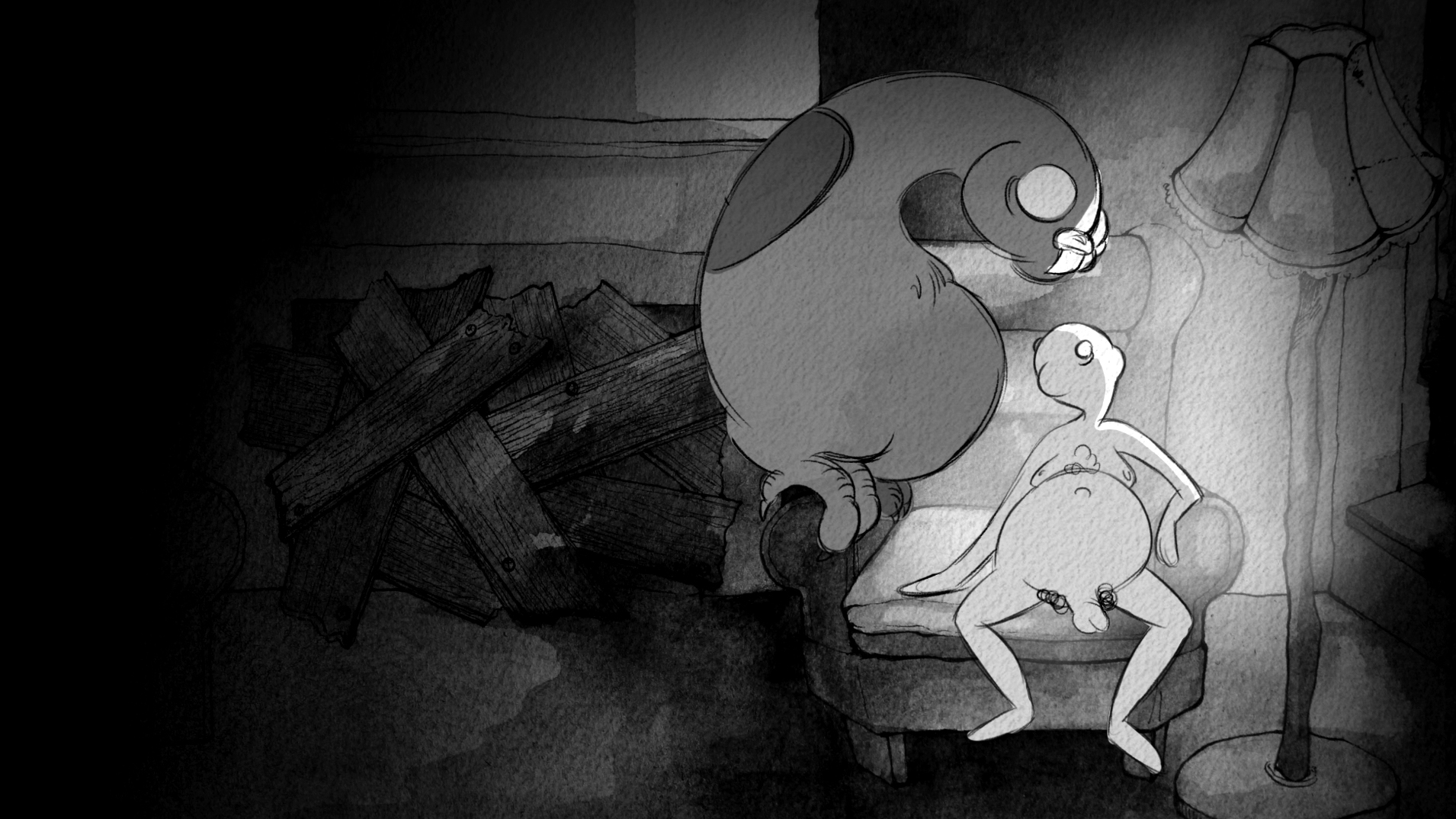 Behind every failed relationship is a unique story of hope and despair, of betrayal and heartbreak. Renee Zhan’s thesis animation at Harvard University, Hold Me (Ca Caw Ca Caw) makes a remarkably salient point about the devastating outcome of being trapped in an unhealthy relationship, not an easy task considering her protagonists are a bird and a boy. It’s a terribly sad story, wounded and wounding in equal measure, singed with humour, making it all the more affecting. It is also an acute, beautifully realised animation which feels treasurable.

A boy and a bird live together trapped in a claustrophobic home and codependent relationship. Their cohabitation is put to the test when Bird lays an egg and her maternal instincts kick in. Hold Me (Ca Caw Ca Caw) is a dialogue-free, 2D hand drawn animation, done in Zhan’s distinctive style—one we’re familiar with from her prior work, Pidge. The playful, almost cartoonish visuals and sound design should awkwardly clash with the very grown-up themes here, yet the result is nothing short of awe-inspiring.

“The story evolved naturally, though by no means easily”

Renee Zhan shared that the animation was inspired by a personal story but it quickly became something entirely new, with its own characters and storyline.

“It felt less like I was coming up with a story, but rather parsing out and slowly understanding the relationship arc of Boy and Bird. Acting as a voyeur, I was peeking in through the boarded up windows of their house to see what was going on. The story evolved naturally, though by no means easily, as it progressed” – she explains.

Hold Me (Ca Caw Ca Caw) touches on so many issues that you can take your pick of what speaks the most to you. For Zhan, it’s a film about becoming a woman, with the egg representing a girl having her first period.

For me, it is about dysfunctional relationships and grief. The way Bird devoted her whole existence to Boy’s happiness, for nothing in return, and the way she kept seeing what she had lost everywhere she turned, unable to escape her pain. I never thought I would feel such intense empathy towards a bird (animated or otherwise), but Zhan has been very clever in turning her character’s grief into something so relatable and utterly devastating. And all without using a single word.

“There is a lot of animation being made about animals who look like animals but act like humans, essentially humans wearing animal suits. I was interested in what would happen if I had a protagonist who was an animal just acting like an animal, and seeing how that affected their relationship, affected the space, affected the film”, the director explains.

Hold Me (Ca Caw Ca Caw) has had a massively successful festival run, having been screened at SXSW and bagging the Grand Jury Prize at Slamdance for Best Animated Short. Her new film RENEEPOPTOSIS is about to hit the festival circuit too. All we know is that It’s about three Renees who go on a quest to find God who is also Renee. We can’t wait to see it so we’ll be keeping an eye out for it!