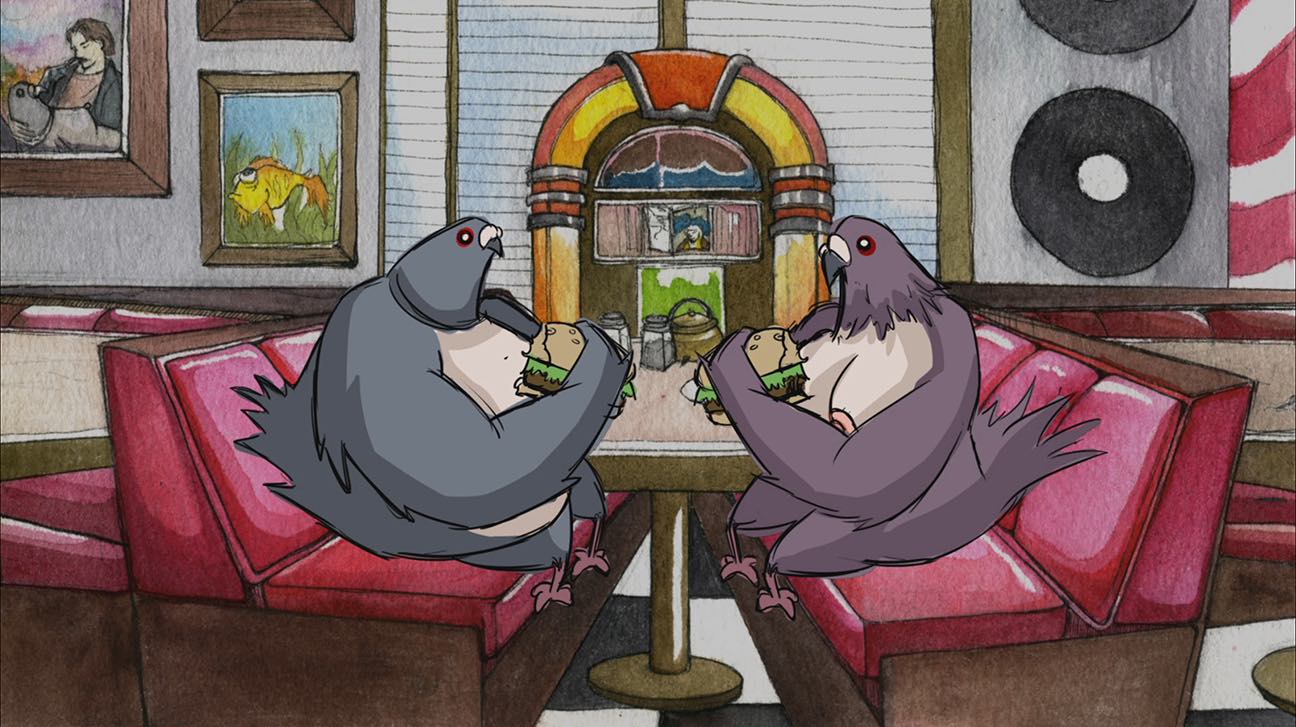 Full of weird surprises and evoking a strange sense of empathy, Pidge is like a slap in the face. In a refreshing kind of way… The premise of the short follows a suicidal pigeon, evaluating his own existence. Completed as a third year film at Harvard University, animator Renee Zhan balances comedy and tragedy in order to create a compelling narrative which is both beautiful and ugly. Despite it being told from the viewpoint of a bird, there are universal truths in the storyline that most of us, even if we don’t want to admit it, can relate to.

If you’re looking for something unconventional, something scrumptiously dark and original, with a pinch of bipolar and a dash of sexy man-boobs, that will make you spit your lunch out from laughing too hard, then you are in for a treat! What I loved the most about it is that the surprises, shocks and laughs never stopped coming. Also the man-boobs…

The inspiration behind Pidge emerged from the idea that humans and pigeons both inhabit spaces like cities and parks. Taking this one weird step further, what would happen if you had a hybrid man-pigeon? Zhan wondered, ‘what would he do? Where would he live? How would he live?’ The only thing I figured out was that the man-pigeon would be ill-adjusted and probably unhappy. And that’s where Pidge began’.

Pidge has a tragic dating record, a tedious job and a weak spot for sleazy establishments. He has a rather bleak outlook on life and the world around him, yet no matter how pitiful or outright pathetic he may seem, his character is surprisingly appealing. Plucking its feathers and stripping it to its bare bones, Zhan manages to make Pidge sympathetic, and as viewers we connect to his fatalistic depression. This, alongside twists in the plot, makes us question our own reality—do we have control over our lives, or is it fate that swoops in unexpectedly, taking us on a different path?

Zhan wanted the audience to simultaneously laugh at Pidge, despise him and sympathize with him. By crafting such a wry, and darkly comedic script, the film becomes immersive narratively, and viewers can forget that the main character is a pigeon altogether. Watching Pidge I felt like I knew him, or at least someone like him, which made me think that Renee Zhan’s creation is so clever it its ability to resonate with the audience. Pidge took 6 months to complete, by drawing it frame-by-frame in Photoshop and then compositing the frames on top of watercolour backgrounds. Her thesis film, which is centred around another unfortunate feathered protagonist, is on the festival circuit now. You can watch the trailer here.