In a version of Kolkata, India, rendered unliveable by rising sea levels, things take a dark turn when a family of climate change refugees are ambushed by a tiger on the flooded streets.
READ REVIEW
Next Previous 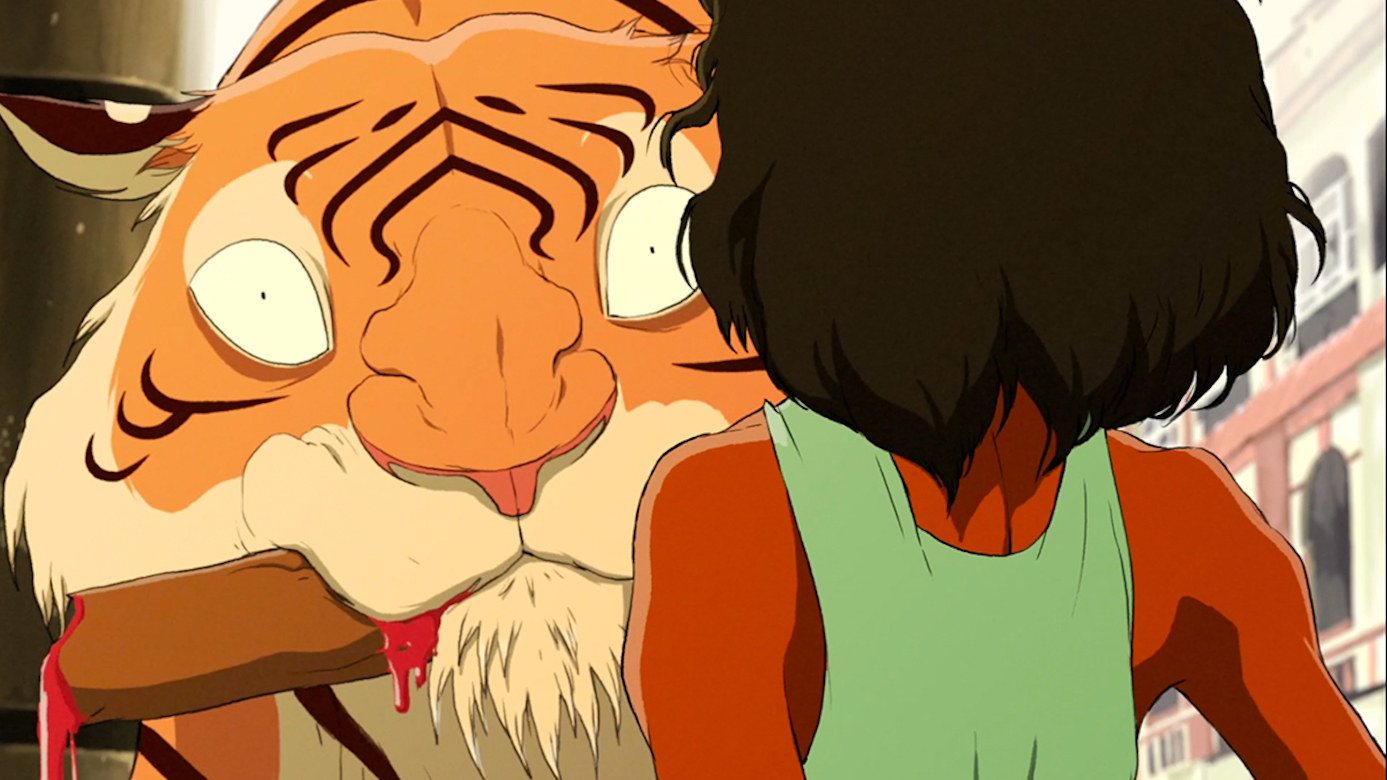 Arriving from India on the heels of an illustrious festival run, we’re pleased to present you the online premiere of Wade, an intense post-apocalyptic animation that showcases its creative team’s fresh design ideas in terms of visual style, worldbuilding, and storytelling, all of which they marry to…a deep sense of environmental conscientiousness?

Set in a future version of their home city of Kolkata which has been made uninhabitable by climate change, the film’s directors, Kalp Sanghvi and Upamanyu Bhattacharyya, craft a moody meditation that imagines survival in a post-disaster landscape, only to then explode the proceedings into a visceral action-thriller. While the film’s setting and supernatural undertones appeal on primal geek levels, and a kickass confrontation with a streak of tigers is unquestionably the heart of the film, Wade manages to transcend its stripped-down plotting and feel more substantive than a simple exercise in badassery. Wade’s initial and patient eye to its flooded surroundings, its thoughtful depiction of the group dynamics within its band of refugees, and the artful and inconclusive ending, all shine in the limited space surrounding its big showcase set-piece. Together, they provide the level of detail and specificity that elevates the action as well as justifies the high-concept climate angle of the film. 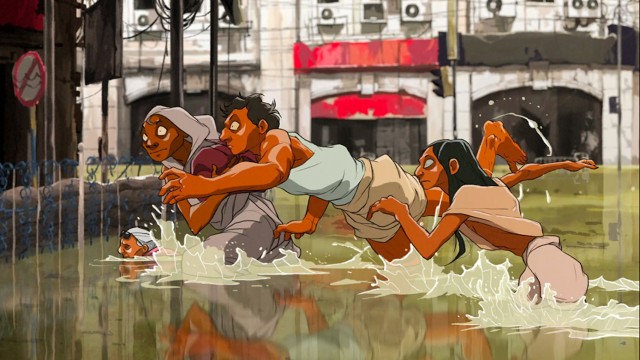 “The more we started thinking about how the whole city was living on borrowed time, almost waiting for an imaginary dam to breach, the more afraid we got” – Wade’s directors explain the inspiration behind the short.

Animation and environmentalism have been engaged in a fruitful partnership for the last several years, a mini-trend I noted in last year’s review of the French student film, Migrants. Animation’s freedom to depict whatever is imaginable with a total disregard for live-action cinema’s need for feasibility or budget has allowed it to be a useful storytelling medium for tackling big abstract concepts like climate change via metaphor or allegory. What distinguishes Wade from the other examples I’ve cited is not only its harder edge (ripped off limbs and infanticide make this a film to keep away from the kiddos) but also its status as a project hailing from Southeast Asia, one of the areas most afflicted already by climate change.

In conversing with Sanghvi and Bhattacharyya it became immediately clear how much this premise really inspired Wade. It was at the heart of the team’s crowdfunding pitch in 2016 when they became the fastest project on the Indian site Wishberry to meet their funding goal, and much of the same reasoning persists in 2022, as the directors noted that,

“While there is a lot of nostalgic storytelling about Kolkata, being a space steeped in centuries-old culture and tradition, not very many stories envision the future of the city. Sadly, Kolkata, along with several other cities in the world like Bangkok, Dhaka, Shanghai, New York, and Amsterdam are extremely vulnerable to rising sea levels…

The more we started thinking about how the whole city was living on borrowed time, almost waiting for an imaginary dam to breach, the more afraid we got. How does our life look after climate change?”

If raising the salience of climate change in the minds of viewers is one of the film’s goals, establishing its creative team at the forefront of a burgeoning Indian animation scene is, naturally, another. Produced under the auspices of Ghost Animation, a collective the creative duo co-founded upon their graduation from the National Institute of Design in Ahmedabad, the film is only the third animation from India to feature on this site following the breakthrough of Tokri in 2020. In a country that is absolutely mad for short films (a significant proportion of global short film search traffic originates from India) that feels strange, but as detailed in my review of Tokri, there have been historical stumbling blocks and headwinds in the development of a homegrown Indian animation industry, obstacles that are only now lifting. The international success of Wade helps contribute to that, as the film was a prize-winner at Annecy and Fantasia, two massive festivals for animation and genre storytelling respectively.

Those validations, as well as the online success that hopefully results from today’s feature should provide wind to Ghost Animation’s sails as they embark on new projects. Bhattacharyya is finishing work on his next solo animated short film, Ten, a dark comedy about the mass exodus from Bangladesh in 1971. He is also developing his first animated feature film, Heirloom, set in Ahmedabad in the 1960’s. Sanghvi is also hard at work, he is currently developing his first animated series, Rajbari: The Ancestral House, a fantasy family drama set in Kolkata and is also working on an animated short film about tiger conservation in collaboration with the Wildlife Trust of India called Remains.