A clumsy accident leads a young girl onto the streets of Mumbai in the hope of making things right. A gentle and touching father/daughter story depicted in exquisite stop-motion from Indian animation mainstay, Studio Eeksaurus.
READ REVIEW
Next Previous 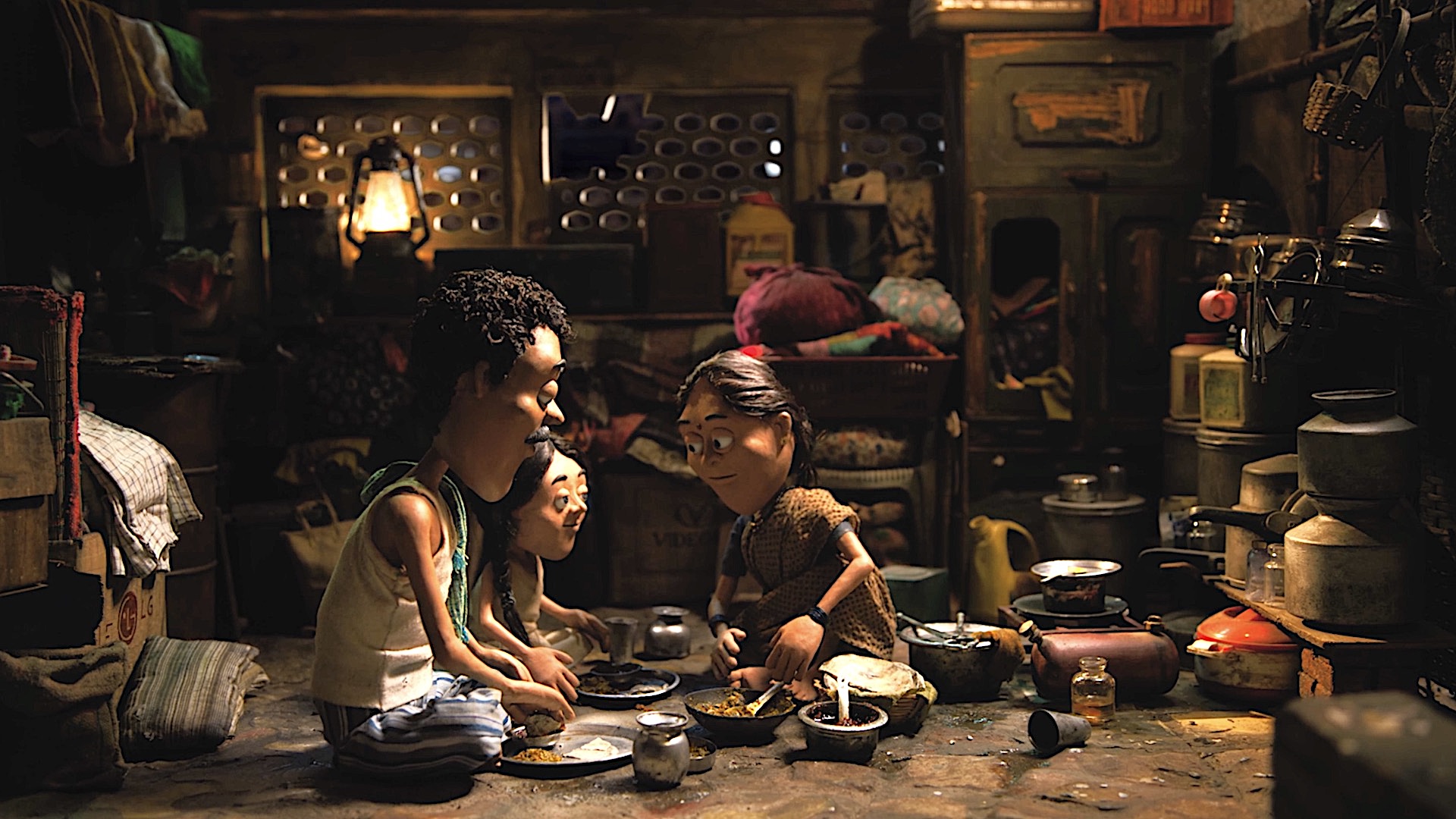 The spark for today’s short film came from an everyday experience, simple and mundane. Traversing the crowded streets of Mumbai in his car, animator Suresh Eriyat was approached by a young girl selling baskets. Eriyat shooed her away—it is assumed by most that the hordes of children who pounce upon motorists at the stoplights of the city are organized by gangs, thus any charity exhibited directly rewards the practice of putting children to work as beggars. Yet, despite the unremarkable nature of this occurrence, Eriyat was struck by guilt. Describing the thoughts that circled his mind, he writes, “What if she was in a precarious situation where she had to sell baskets to bring peace to her home? What if she needed some help from Me? How insensitive of me?” The premise of a story was born, one that would take 8 years to bring to completion.

That Tokri should take 8 years to create is in some sense a surprise. One of India’s foremost independent animators, Eriyat is astonishingly prolific, with over 450 completed works in a multitude of styles: stop-motion, 3D, and 2D hand-drawn, among other techniques. Much of this output is commercial work, for which he’s been duly recognized—honors from the Clios and Cannes Lions are on his resumé, as well as the status of being India’s first winner of an Annecy Cristal, but now a decade out from the creation of his own studio alongside his wife, Nilima, Eriyat’s ambition has grown to ever more elaborate personal projects, of which Tokri is the crowning achievement to date.

While a relatively simple story, grounded in the lived experience of India’s destitute, Tokri overflows with detail. The scale of the production is truly remarkable—we adore stop-motion, with over 100 films in our collection, but despite the overwhelming diversity of subjects and styles you’ll encounter while traversing the catalog there are a few commonalities to the majority of them: tight compositions, confined spaces, relatively few characters. These decisions are often right for the story, but they are also a compromise to the pain-staking nature of the craft, an attempt to reduce complexity within scenes. An unusual degree of motion abounds within even simple scenes in Tokri, and Eriyat and his team are unafraid of going wide as well, in shots that seek to depict the cacophony of the Mumbai streetscape and which encompass dozens of moving elements. We always love a good stop-motion timelapse, and the video below gives you a good sense of the undertaking.

Excessive? Perhaps, but undeniably effective in creating a sense of realism for the story and immersing viewers in the specificity of the setting. Craft however is usually a secondary concern to audiences, who judge a film first and foremost by story. Fortunately, Tokri is unusually resonant in this regard. In contrast to the busyness of the world-building, the plot of the film is streamlined, telling a touching, and universal story of familial bonds that are unconditional.

Streamlined is not the same as concise however, and Eriyat displays a deliberateness to the storytelling that verges on indulgent. Tokri strikes me as a film that benefits from a cinematic experience, as the meticulousness of its large sets and sumptuous sound design partner with an approach to pacing that allows each plot point to breathe. Ultimately an exercise in inculcating empathy for the destitute, inordinate care is given to the emotional tenor of the young girl and weighted significance upon each action she undertakes. I fear that online audiences will chafe a bit with restlessness, but patient viewers will be rewarded with nuanced and deeply moving story that, if hurried, could have easily slipped into maudlin melodrama. Instead, Tokri resists romanticization, yet swells one’s heart via its simple affirmation of the love shared between a father and daughter.

Speaking of cinemas, the film was exhibited in plenty, as it premieres online today after a lengthy festival run that saw it win over 30 festival awards. The international success of Tokri is not only a feather in the cap of Studio Eeksaurus and a suitable reward for the risk of self-financing the project, but also for the larger Indian animation industry. India does not have a long history of animation in its entertainment mainstream, and though it is quickly becoming a force in the VFX space due to the emergence of young, cheap talent emerging from schools like the Pune-based campus of the renowned Rubika-Supinfocom, much of this is still contract work for Western media companies. There is a lack of quality original creative work, creating an unfortunate “chicken or the egg” scenario where domestic investment is made difficult by a perceived lack of demand in the market.

Eriyat is doing his small part to remedy this, starting an incubator via Studio Eeksaurus to mentor emerging animators, and also serving as a thought-leader for the industry. He recently served on a government panel dedicated to supporting the creation of original Indian content. The success of projects like Tokri will hopefully serve to inspire others towards this larger vision of the potential of the medium in the country, and in the meantime, Eriyat will continue to work—he tells us that he is currently in development on not one, but two feature film projects in addition to two new shorts!