If a girl crosses the border between her internal and external reality and no one is around to see it, does this animated short really exist? Part of our SXSW Shorts Week coverage. #SXSWshorts
READ REVIEW
Next Previous 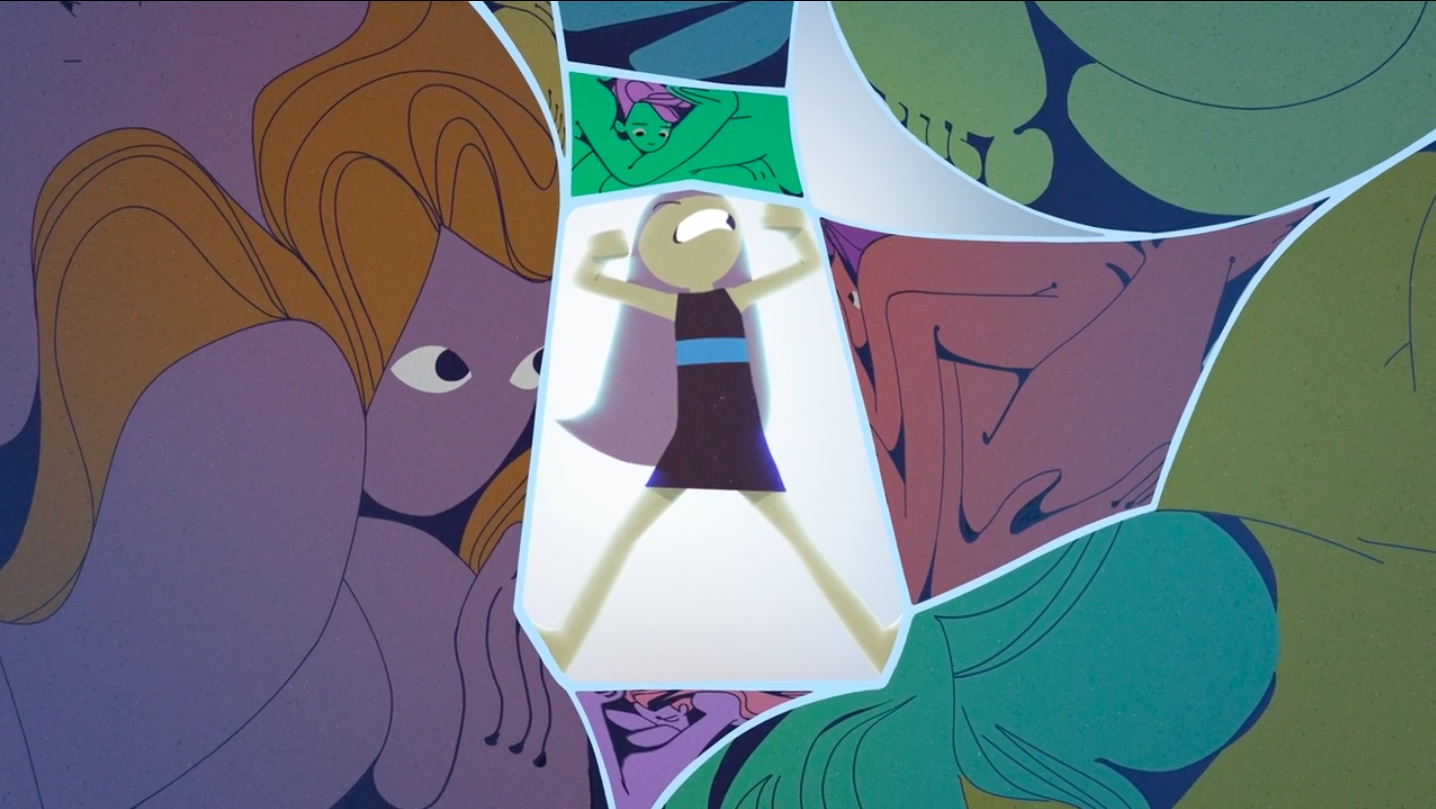 Based on her pre-existing illustration series Body Language, illustrator/director Tuna Bora teamed up with animator Jonathan Djob Nkondo to create short film Solipsism. The story of a young girl who gets lost inside the world around her—or rather, inside her own head—this seven-minute short transports us to a gorgeously designed world and takes an unconventional narrative approach to explore a fascinating philosophical idea.

While Bora’s clean and attractive design and Djob Nkondo’s fluid style are front and center when evaluating the short’s appeal, we were equally rapt by the work’s thematic ambiguity. To be honest, although I was familiar with the concept that the title invokes, I had to look up what the term “solipsism” actually meant before truly diving into this write-up. In a nutshell, this philosophical view describes the notion that the only thing that truly exists is your own self—anything outside that cannot be counted on. Although the question of what constitutes the “self” is its own philosophical discussion, the theory behind solipsism obviously has many different layers and can be an exercise in unravelling our existing world view.

Consider the simulation hypothesis, a concept that, broadly speaking, describes our whole universe (and therefore ourselves) as part of a simulation conducted by forces more advanced than us. If you’ve seen The Matrix, you’re probably already familiar with this line of thought. So a branch of critical thinkers and philosophers came to the conclusion that the only thing you can know for sure to be real is your own consciousness. Even if everything around you is a simulation, even if you yourself weren’t real, what you know for sure is that you are thinking these thoughts. To pretentiously quote René Descartes: “I think, therefore I am“.

The amazing thing is that once you accept this idea, you truly become the master of your own fate. It is your choice how you perceive the world when matters of ontology are negotiable. We see the actual practical implications in our modern understanding of gender fluidity, for example. Of course, these thoughts can also lead to an existential crisis: Does anything actually matter? Who am I, if I’m not me? What is the meaning of all of this? The good answer is: You get to decide what is meaningful to you. Be your best, authentic interpretation of self, as long as you don’t hurt anyone else. Like the young girl in Solipsism, we can form ourselves and the world around us like clay, whether we consider either or both of these things to be true or not.

As you can already see, the young girl in the film isn’t the only one lost inside their head…If you give yourself over to the self-reflective process prompted by Bora and Djob Nkondo’s magically abstract creation, its easy to fall into a rabbit-hole of navel-gazing. In our current circumstances, we might be uniquely susceptible—the effects of social distancing are causing our relationship to the world to be redefined. In self-isolating, many are finding it imperative to relearn how to be alone with our own selves and resist myopia. Hopefully, most of us come out stronger as individuals at the end of this tunnel, and that this experience only strengthens our notion that humans are social beings, with an innate need to relate to each other. Let’s not forget these lessons the next time we are lost in our heads.

In a more evident reading, the film is also about body dysmorphic disorder – a ‘body-image disorder characterized by persistent and intrusive preoccupations with an imagined or slight defect in one’s appearance’. Which is basically another form of how your perception of self correlates with reality. Solipsism shows what it feels like when your mind comes crashing down on you, especially in phases of depression or through feelings of anxiety. At the end of the day, like the idea at the core of Solipsism, the beautiful thing about experimental films is that it can be whatever you want it to be… whatever you need it to be.

“If […] no one is around to see it, does this animated short really exist?“ This description was provided by the filmmakers themselves and the second part is almost excruciatingly ironic. After the cancelation of SXSW, filmmakers had to readjust their festival strategies. SXSW wouldn’t have been Solipsism’s world premiere, though, since it already played festivals such as GLAS (which unfortunately had to cancel its 2020 edition as well). It is a shame nonetheless that Solipsism couldn’t be experienced as part of the SXSW communal atmosphere, but we are thankful that we can play a part in getting this pensive short out to audiences at home. We are glad there are people around to see it, and grateful that this film does exist!

Though we weren’t familiar with Tuna Bora’s work before we encountered Solipsism, the animation talent involved in the film’s production are filmmakers we’ve been tracking for some time. We’ve featured the work of Jonathan Djob Nkondo on S/W twice before – with FUTUR SAUVAGE and THE LAST EXHIBITION – when we labeled him an “animator we can expect great things from in the coming years”. Solipsism also includes animation from Nelson Boles (Little Boat) and Vincent Tsui (Made in China), two names the Vimeo community will already be familiar with. But Bora’s talent in design is apparent, so we are intensely interested if future animations are in her future. For now, the gifted illustrator has told us that she is currently working on a graphic novel.