After his father’s passing, Robbie returns to London to find that his inheritance was spent by his father on a sex doll that strikingly resembles his late mother.
READ REVIEW
Next Previous 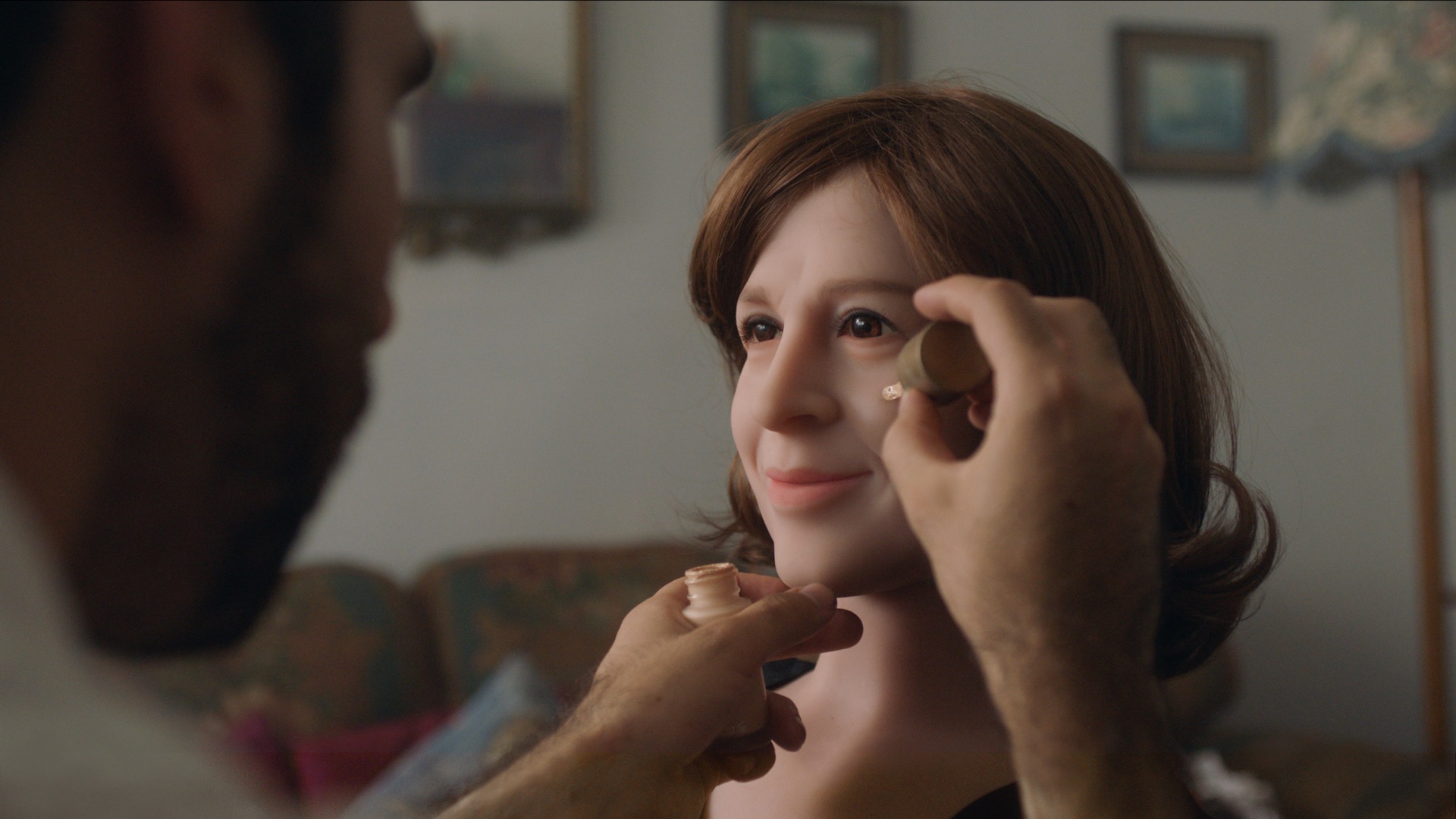 Writing about the Thunder Road feature for Rolling Stone, David Fear penned a glowing review that provocatively riffed on the film’s Springsteen-connection by paraphrasing a famous quote—“I have seen humanistic American filmmaking’s future, and its name is Jim Cummings.” The classification and codification of filmmaking movements is a nebulous business, more the purview of critics then of the artists supposedly participating in these movements, but, like last decade’s revival of UK Social Realism, or our current boom in “elevated horror“, if we are truly on the cusp of new humanist movement for American film, I’d like to nominate the writing/directing duo of Celine Held and Logan George for a place in the vanguard.

In the midst of a truly prolific 2 years of shorts filmmaking, Held and George’s film Babs released this week online via the magazine Topic. It examine’s a familial relationship through a unique and lurid lens, but unlike most films with an attention-grabbing sexual premise, it declines to pursue comedy or titillation, instead using its concept as an avenue for a son to process, in absentia, the complicated feelings he possesses towards his father, and, ultimately find connection.

To be a humanist film Babs needs to identify and relate to something real and genuine. With only one character and limited dialogue however, Held and George handicap themselves deliberately in the script, which makes their success in depicting the interiority of the son all the more impressive. George performs the role himself, further proving that, in addition to being an acclaimed director, he is perhaps the most magnetic actor consistently working in short films at the moment. While not flashy, intimate handheld cinematography from go-to DP Lowell Meyer accentuates the process of placing the audience within the character mindset, using in-camera motion and quick-cuts to build a tension and rhythm that mirrors the son’s initial frantic mental space. Later the film switches to cell-phone photography and incorporates non-actors to better provide the illusion of verité authenticity.

To the uncharitable it can feel like a bait-and-switch to establish a provocative top-level concept even though your primary concern is telling a more conventional, but still wonderfully executed character-study. However it’s smart business, and one more filmmakers should take heed from. Where do really good short film concepts come from though? Too often we imagine that they emerge fully formed from some deep reservoir of innate creativity and are willed into existence through mystical epiphanies. The truth is usually more banal—lit departments exist in Hollywood and elsewhere for a reason, and the filmmaking duo of Celine Held and Logan George ended up finding inspiration for this film in a click-baity newspaper article: “Heart-broken Chinese widower, 70, receives long-awaited sex doll that is modeled after his LATE WIFE”.

I find this anecdote interesting because it, and Held and George themselves as creators, are instructive lessons. So often creatives block themselves with self-inflicted anxiety surrounding what to make art about that, in the quest for a perfect premise, they fail to get around to making anything at all. Held and George seem immune from this pitfall—they debuted as writer/directors on Short of the Week in August of last year, and now, less than 16 months later, are tied for the most features ever on this site with 5. Somehow this creative abundance has not come at the expense of quality—Caroline was the only American film included in this year’s Official Selection at Cannes (also a “plucked from the headlines” premise btw), and next month they will premiere another new short film at Sundance, Lockdown.

I don’t mean to suggest that Held and George are ideating shorts from their Facebook Feed like some sort of short film generating algorithm. They were primed for this article to find them. The duo already had a hazy theme they wanted to explore, that of intergenerational secrets and the effect they have on adult children after their parents passing. I imagine Held and George have a notebook full of prompts like this—half-formed ideas or moods they are attracted to, just waiting for the right bit of information, the right story, to come around and ignite their creativity.

To be this prolific, especially in the money-pit business of short films, requires a certain degree of ingenuity, and Babs’ production process is similarly filled with useful insights. Held is a a UK/US dual-citizen, and the team leapt at the chance to produce a film across the pond with Compulsory, an up-and-coming prod house that boasts a cool roster, including S/W alum Joe Nankin. Continuing a relationship with producer Kara Durrett, the team was able to raise an an initial $5000 from the Davey Foundation based off the script, but that would hardly cover the film’s most basic and pressing expense—the doll itself. Fortunately the company Real Love Sex Dolls, loved the script and agreed to donate 2 fully customized dolls, each hand sculpted and hand painted (MSRP: $9000 each!). RLSD smartly hopes their dolls can begin to be seen as more than just sexual toys: as companions to those who are lonely, suffer from PTSD, and rape or sexual assault victims, and as such this film provides a nifty marketing opportunity. Filmmakers, sometimes all you need to do is ask!

For those concerned about the eventual fate of those two dolls, Babs has a surprising and entertaining coda in the form of Bringing Babs Home, a short companion film that documents George’s character bringing Babs back to the states. This film is a slight, but delightful bit of comedy, shot incognito at the airport to preserve authentic reactions from passerbys, and is yet another testament to the inventiveness of Held, George and team. The prolific duo have a feature ready to go, and we’ll be seeing Lockdown at Sundance soon, so hopefully sometime in 2019 this duo will claim that top-spot as the most-featured filmmakers on Short of the Week. As for that burgeoning American Humanist label? I doubt Held and George care, but with their rising profile, and new work from Cummings and Sean Baker among others on the way, who knows? Maybe it’ll stick.