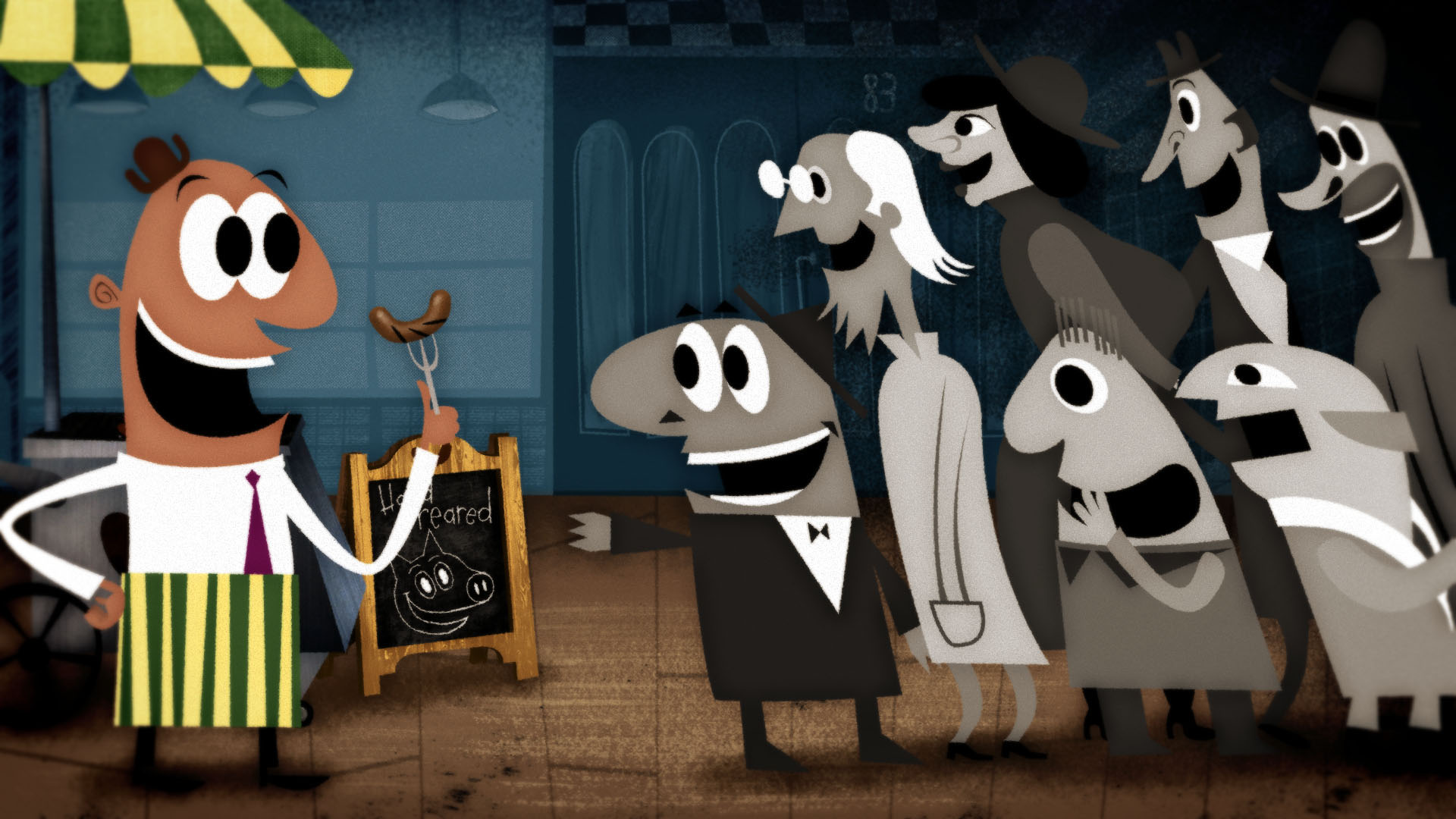 With last week being all about the scares on Short of the Week and the week before bringing debates about humane slaughter, we thought it was about time we brought a touch of lightness to the site. Delivering this tasty slice of family-friendly entertainment is Robert Grieves’ Sausage, an action-packed 6-minute animated short featuring a narrative and aesthetic oozing nostalgic fun.

Centred around a turf war between two friendly market vendors and the ultra-competitive trader who starts to sell in their square (a metaphor for the supermarket giants who threaten the future of local suppliers), Sausage is a great example of how a simple, but carefully-considered premise can yield positive results when executed with the love and care Grieves has put into his short. Radiating boundless energy and infectious humour as we’re taken on an escalating battle of inventiveness between these three marketeers, Grieves’ narrative strikes the perfect balance between entertaining his audience and spreading an important message – with Sausage’s topical themes even resulting in the short being screened in schools throughout the UK.

Creating a retro-tinged aesthetic with a production approach designed to find what Grieves describes as the “best possible mid ground between analogue and digital”, the light-hearted tone of Sausage doesn’t stop with its fun-filled storyline. Inspired to create his short after becoming somewhat disheartened by the “commercial” look of some of his recent work as a motion designer in the broadcast industry, the filmmaker decided to create a visual style he’d enjoy working with, by using his passion for mid-century design as inspiration. By getting back to working with an aesthetic he truly loved, Grieves was able to break free of the shackles and restraints of his paid work and really go to town with the grin-inducing production of his effervescent short.

Filmmaker, lecturer and Skwigly contributor (Robert recently published this insightful interview about marketing your short film online with SotW favourite Eoin Duffy and is now discussing a series where top directors discuss their recent experiences on the festival circuit, which he describes as a “pretty deep look into the festivals vs online debate”), Grieves is an animator embedded and actively participating in all areas of a community he clearly loves. This passion shines through not only when watching his infectious short, but also in the well-considered preparation Grieves has given to releasing Sausage online. Playfully setting his short free during ‘British Sausage Week’, the filmmaker has left no stone unturned when it comes to plotting the next stage of distribution for Sausage following a successful festival run – filmmakers take note of Grieves detailed press material provided on his website.

But what’s next for the talented animator/educator/journalist? – “After tackling a longer piece like Sausage, as well as all the festival involvement, I’m chomping at the bit to attack some shorter pieces” says Grieves. “I’ve learnt so much from this film, and I want to apply that into some more experimental areas. I feel like what I’ve learnt in character and story will just be integral to any future projects, but now I get to be more spontaneous and care free with those new skills. I’ll also be taking more risks in my commercial work. With a passion project like Sausage demanding so much time, I’ve had to treat paying projects more efficiently, which sadly means being more creatively cautious. Sausage was not only a mammoth workload, but also kinda traditional, so finishing it leaves me feeling liberated and ready for anything.”