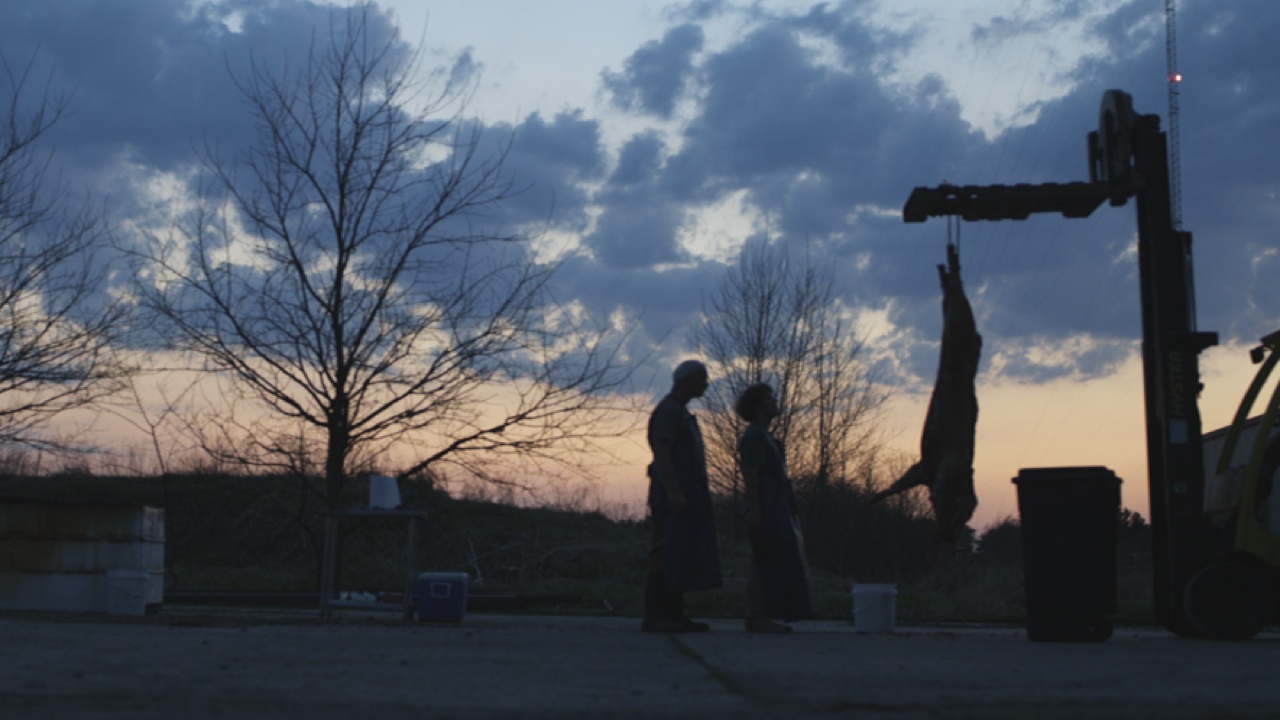 Drama about Family in Live-Action
Directed By Jason B. Kohl
Produced By UCLA
Made In USA

Right from the top let’s get through a disclosure: today’s film, The Slaughter is directed by Jason B. Kohl, a long-time contributor to the site. Lest this be thought of as crony curation, I would point out that the reason Mr. Kohl was invited to contribute in the first place is precisely because he is a supremely talented filmmaker. Furthermore, let me appeal to authority—the film debuted at SXSW 2013, and was a finalist for the Student Academy Awards. It’s good, really good.

It is always a worry when we screen work from friends, we pride ourselves in honest feedback but human relations are built on white lies. The Slaughter thankfully though is not merely a polished effort, it is a powerful work, dealing with primal father/son tensions through a coming-of-age framework, and roping in devices no less weighty than death and sudden violence. Telling Mr. Kohl we loved it was an easy thing to do.

Taking place on a Michigan farm, the film is a relatively quiet character drama. A father raises pigs for meat, his son, a youth of slight stature and aimless ambitions, is pulled out of bed to help with the day’s slaughter. Two things are quickly established: the father is in the process of selling the farm, and secondly, he holds his son in rather low esteem. This key dynamic is very thoughtfully laid out and performed by the two leads, the noted character actor Michael Shamus Wiles, and also relative newcomer Elijah Bridges, whose performance is the lynchpin of the film. Bridges’ character embodies a jumble of mix-matched emotions: admiration for his father but resentment of his scorn, all the while nursing the implicit fear that his father’s underestimation is indeed deserved—that he is in fact worthless.

The act of slaughtering the pig is the explicit plot of the film (warning: you will see this process up close, read the director’s statement to learn more about the humane processes behind the film). In this type of narrative it is common for the son/employee/player to rise up and prove his value to the ornery father/boss/coach, winning begrudging respect. Kohl resists the neatness of this structure in the details, if not necessarily form. The son attempts to prove himself, but from the excess amounts alcohol he imbibes, to the testy way he reacts to his father’s instruction, you can sense the aforementioned jumble of  emotions: he is trying too hard, it means too much to him, he’s messing it up.

In press materials, Kohl refers to the plot of the film as a father taking his son out to “test his resolve”, but the language of that description feels too benign. The father’s lack of encouragement and regard feels abusive. The disturbing thing about striving to prove oneself to such a figure is that you implicitly sanction such abuse. If the desired end of your self-improvement is realized, does that justify the means? It’s a dilemma that is at the heart of the stunning feature Whiplash, which is in theaters now and began life as a short film a scant two years ago.

What’s incredibly interesting about The Slaughter is how Kohl disrupts this standard flow, and in the process diffuses this ugly dilemma. Rather than exulting in the son’s triumph, a false and cliched type of victory, Kohl has the son verbally confront his father by calling him a coward. It is a perverse angle to take—rather than rising to expectation, he seeks to wound his father him by lowering him to his own level. It is a process of using his victimization to wound the perpetrator, and it mirrors the film’s close, in which the emotional scars turn physical. It is through this shocking twist that the two types of stories—conventional triumph, and Kohl’s defiant emotional judo—blend. By using his victimization as a weapon, the son gets the last laugh, wounding his father emotionally, but also proving the quality of his character through the ability to absorb abuse. One gets the impression that the physical manifestation of pain ends up awakening the father to the insipid emotional variety he’s inflicted for a longer time, providing some hope at least to a dark event.

As one can tell from this extended reading, the film is excellently written. Subtle, and filled with details and plot points which are called back, it is a great showcase of Kohl’s emerging talent. You can find more excellent writing from Kohl here at SotW, and last we chatted he was also busy working on a book,  Film School; A Practical Guide to an Impractical Decision, which is scheduled be published by Focal Press in 2015. For fans of his filmwork, you’ll be glad to hear that Kohl is developing his first feature currently, also set in Michigan, an absurd thriller about an “unhinged service worker who kidnaps her estranged father in a desperate attempt to push her way into the 1%”.