15 of Canada’s most acclaimed independent animators reflect on one day of their lives using only 4x6 inch yellow sticky notes, a black pen and their animation skills.
READ REVIEW
Next Previous 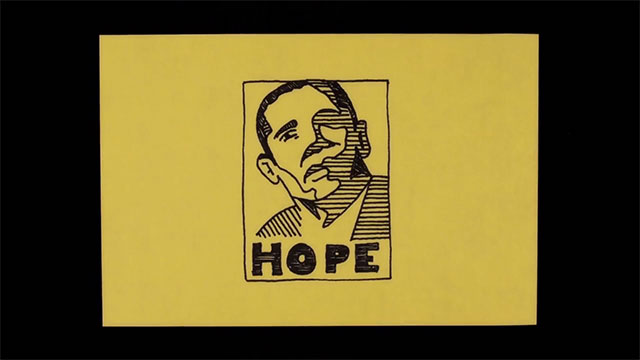 Setting out with the aim of creating a short that could inspire the next generation of aspiring filmmakers, director Jeff Chiba Stearns and his collective of fellow Canadian animators have created a film that not only showcases the individual styles of its collaborators, but also tackles some universal themes. With the brief of reflecting on personal and global events that impacted one day of their lives, Yellow Sticky Notes provides an insightful glimpse into the minds of these talented artists.

With the original idea of animating on these post-it notes stemming from Stearns’ desire to get revenge on these small adhesive notepads and ‘to-do’ lists that were at one point consuming the artist’s life, the filmmaker challenged other animators to build on the techniques and ideas he’d initially explored in his original Yellow Sticky Notes and Ode to A Post-it Note short films. Lasting just under 8-minutes and featuring 15 animators, each individual filmmaker in the collective was tasked with creating their narrative in a challenging 15-20 second duration. Despite this tight running time, this creative collective didn’t shy away from tackling some ambitious narratives in their bite-size sections. From global population figures to chronic illness and forest devastation, the filmmakers deliver some important messages (with varying success) on their little yellow notepads.

With a somewhat fragmented narrative, loosely connected by the general theme of self reflection, Yellow Sticky Notes was never going to be a film blessed with the most engaging and involving storyline. Yet, it’s the simplicity of the piece that is its most refreshing feature. Stripping the technique back to the basics of ink on paper, the uncomplicated aesthetic perfectly compliments the brief, allowing each filmmaker to focus more on the story they want to tell – almost like Stearns’ was daring them to doodle their inner thoughts and concerns onto their post-it notes.

As with the Late Night Work Club omnibus of shorts we featured on SotW in 2013, this Canadian Anijam project once again raises thoughts surrounding collaborative filmmaking and the advantages/disadvantages of the format. And just like the aforementioned Ghost Stories anthology that came before it, whilst we loved the idea of bringing all this talent together to create such an enjoyable film, ultimately we’d still love to see this collaborative process used for creating films with a little more narrative complexity.

On a final side note – it’s always nice to see more from SotW alumni Malcolm Sutherland, Cordell Barker and Jonathan Ng – even if it is this brief.