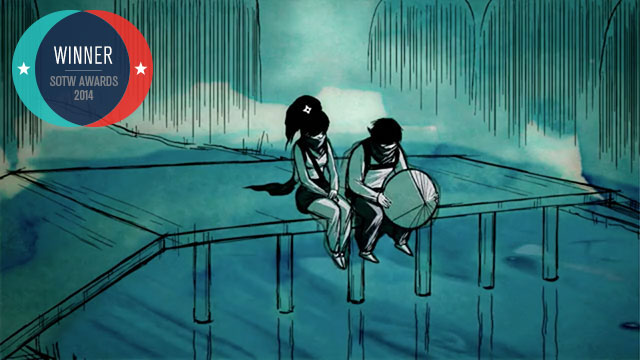 Drama (and the same can be said of  love) is simply two opposing forces coming together—one defining the other as a positive charge needs a negative charge to create attraction or repulsion. Requiem for Romance brings opposition to a new level. The film combines opposing techniques with the voiceover of a soft phone conversation and the animation of frenetic, anime-inspired swordplay to tell the story of two lovers at a crossroad with their traditional values.

We’re two people who are right for each other. So it should be simple. It should be a happy ending. I don’t know why this has to be so difficult. Life doesn’t always have a happy ending. Come on you gotta stop watching those Korean dramas. They’ve brainwashed you.

It’s almost too obvious to point out, but clearly a major draw for Requiem for Romance is the sheer beauty of its animation. The film combines traditional drawn animation and live action backgrounds into a dreamy watercolor aesthetic.

But great films use aesthetics to complement story. And as beautiful as this film is on its own, its aesthetic actually brings greater meaning to the story itself. The watercolor bleeding and seeping through the backgrounds gives life to the larger societal pressures the two lovers battle. They, by contrast, seem small, inconsequential to a larger beauty that makes the sour ending seem not just inevitable but also more palatable. We accept that these are two forces not meant to attract and are somehow okay with it. In fact, it’s this acceptance of a larger fate in spite of our personal desires, not only for the characters but for us as viewers, that makes this short such a remarkable and cleverly complex story.

Jonathan, a Canadian filmmaker, has worked as a pre-viz animator on Hollywood blockbusters before devoting himself to making his own animated films with an upcoming feature film in the works.