A space traveller finds himself on a planet filled with tiny suicidal men.
READ REVIEW
Next Previous 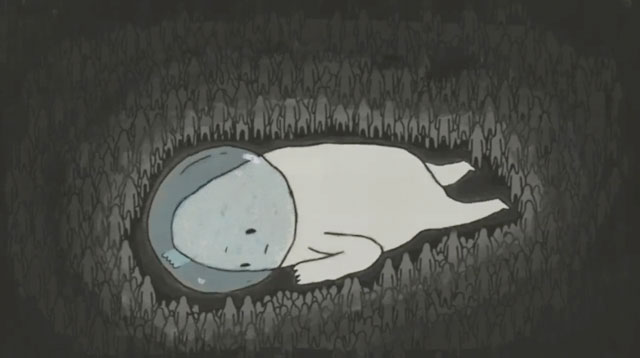 Malcolm Sutherland is a unique and prolific animator who has developed quite a reputation in the indie-animation world for his diverse hand-drawn style—evidenced by his being approached by Vimeo a while back to do a promo for their recently concluded Vimeo Festival.

His most notable narrative short film effort came over a year ago with The Astronomer’s Dream, a vibrant film featured in Wholphin #10, that was nonetheless a little too obtuse for me. Umbra is his followup, and while a slighter effort, weighing in at 5 min with a minimalist style, it is certainly a treat.

The title refers to the main shadow created by an blockage of light, and this concept plays a critical role in the plot of the film. While Umbra doesn’t showcase the wonderful grotesquerie of character design evidenced in other of his works, Sutherland makes up for it by contriving an interesting sci-fi concept which continues the fascination he displayed in The Astronomer’s Dream for closed reality loops and interesting metaphysics.