An emotional robot reconciles his feelings of loss—through butchery! A VFX horror short, being adapted into a feature by MGM.
READ REVIEW
Next Previous 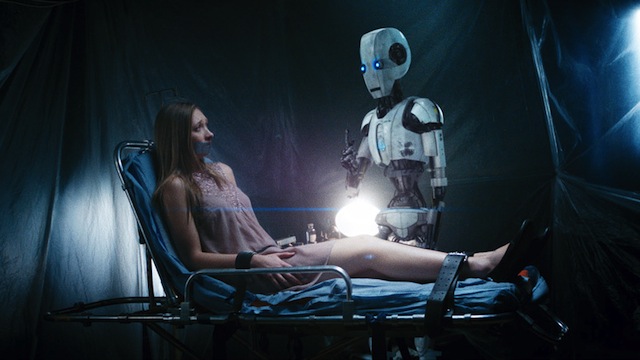 Often, as our old friend Kirby Ferguson might argue, creativity is not the act of making something new whole cloth, but combining familiar elements in new ways. That’s what Rob McLellan accomplishes with ABE, taking the genre of VFX sci-fi teaser, and porting it into a torture-porn, horror framework.

A misguided soul, ABE is a futuristic robot struggling with unexpected feelings. Abandoned by those he loved, he channels his confusion and loss into “fixing” the fleshy humans he encounters.

The result, is remarkably enough, an actor’s film—defined by an extended monologue. What is remarkable of course is that the main actor is entirely animated. This isn’t unusual on a Hollywood level, but it is on the shorts scene. Films like this, and Gumdrop are showing that CG expressiveness is coming a long way however.

By marrying two genres that make Hollywood execs melt, the news this August came as no surprise—MGM is working to create ABE into a feature film. If you pay attention to these things, you’ll see a familiar name in Steve Tzirlin producing, he also is shepherding a feature from RUIN director Wes Ball, as well as the ROSA adaptation, both through Fox. It was from Tzirlin tip that McLellan first came to our attention, for the ambitious, if flawed RAHAB. That film put the British VFX filmmaker on the map, securing him a manager and agent. By the time ABE was ready for the internet, all the pieces were in place to take the jump. Congrats to Rob, and enjoy a serial-killing robot, to go along with a psycho-dad and Zombies! as part of our Halloween week of scares.