In the vein of Sci-Fi VFX shorts like “The Raven” and “Rosa”, Wes Ball creates a thrilling and gorgeous CG chase sequence, sure to draw the attention of Hollywood.
READ REVIEW
Next Previous 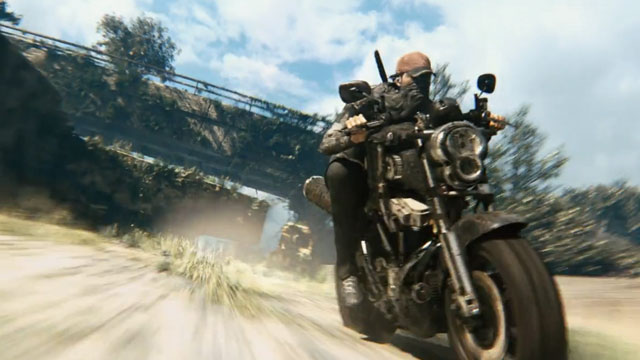 The chase sequence–it’s a cinematic staple. Nothing is quite as primal and intense as one party in hot pursuit of the other. But, just because a film trope is well-traveled, it doesn’t mean that new life can’t be injected into its veins every now and again. Well, in the case of Wes Ball’s animated short, RUIN, “new life” hasn’t just been injected–it’s been pile-driven into the bloodstream with the force of a ‘roided-out sledgehammer followed by a chaser of Red Bull.

The story is simple enough. In a post-apocalyptic future, guy finds something he shouldn’t. Bad guys catch on. Then, it’s off to the races. What results is a chase sequence more thrilling and engaging than any similar set-piece spit out by Hollywood in the last ten years (No, that’s not hyperbole, Mr. Bay). The chase is elegantly choreographed with sweeping camera moves and thrilling angles. And, then there’s the animation itself. Our main character zips through mangled streets and tunnels with stylish grace. The environments are beautifully constructed, rendered with an almost photo-realistic gloss. This is a world fully realized without the slightest form of exposition or dialogue–a story told through the decaying textures on buildings and the rust of the pursuing enemy fliers. In cinema, imagined apocalyptic futures are usually grey, murky, dystopian settings, but here we are treated to vivid blues and greens. The world is saturated in color, suffocated by fecund vines, sweltering heat, and a haze of buzzing insects.

There is no question that RUIN is a polished work of computer generated art, which really isn’t surprising considering its pedigree. The film is put together by OddBall Animation, which was responsible for VFX on last year’s popular music video Eye of the Storm, as well as contributions to Chris Milk’s impressive interactive music video 3 Dreams of Black. Based out of Los Angeles, RUIN is an incredible technical showpiece for the team, everything is firing on all cylinders here, from the camera work, to the character design, as well as the John Williams-esque musical score.

And, really, that’s what RUIN is–a remarkable calling card for a budding animation company. We’ve seen filmmakers like Fede Alvarez, Ricardo de Montreuil, Jesús Orellana, and most recently, Aaron Sims, break through into Hollywood with visually impressive shorts, and, with over 150,000 Vimeo views in less than 48 hours, I’d say RUIN has successfully drawn itself some attention. Yes, plot may be thin, but when you’re moving at a 90 mile-an-hour clip, story structure suddenly becomes irrelevant. Like all great shorts, RUIN leaves you wanting more.  This feels like the introductory scene to a great film. You hear, that OddBall animation? A feature film. After all, a guy can dream.