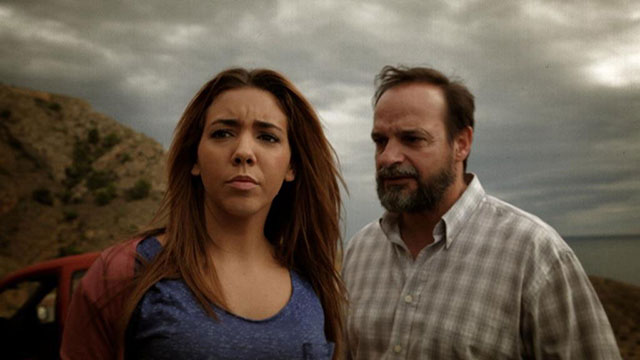 Sometimes we forget, especially in the world of shorts, that a solid horror film doesn’t need supernatural beings or slasher heavy gore. Heck, it doesn’t even need to take place at night. Spanish director Alberto Evangelio dropkicks convention and brings forth this taut bite-sized horror film—a suspense thriller that quickly escalates from the mundane to chaos.

Eschewing traditional horror settings for a scenic coastal highway, La Cruz starts innocuous enough. A doting father is teaching his daughter to drive stick. It has all the trappings of domestic melodrama—Dad’s not getting along with Mom, but he’s doing his best to forge a bond with his daughter despite their differences. From the get go, you might think you’re in for a touching tale of familial redemption and stalled engines, of wrongs being made right, of a man who is repenting for past mistakes. But, then again, that wouldn’t be very interesting…

As soon as the turn hits, when all hell breaks loose, any semblance of normalcy is shattered. The narrative quickly builds from bad to worse to holy sh*t in minutes. I like to think of this film as “Murphy’s Law: The Horror Addition,” a rolling ball of terror that picks up more and more petrifying momentum as it continues to roll down the hill.  And, all the while we are stuck right there on that cliffside road, forced against our will to hang out with the female lead as she watches her idyllic familial facade crumble around her. Never do we leave her side, and thus, this film has a tremendous sense of urgency and pace (it practically takes place in realtime). The result proves to be a brutal, seat-gripping ride—a narrative with twists and danger that mirror the curvy seaside road on which their van ascends. With this short, the old suspense cliché most definitely holds true: you want to find out what’s going to happen next, even though you know things don’t bode well for the characters.

La Cruz screened at more than 100 festivals around the world and took home 20 awards along the way, including an honorable mention at Sitges in Spain. Yet, despite its festival success, it’s pace and brief runtime are tailor-made for the internet. Director Alberto Evangelio and his team at Beniwood have truly crafted something special here—a transfixing tale of domestic horror that proves once and for all that nothing is quite as terrifying as learning to drive manual transmission.

Be sure to check out the trailer for Alexis, the next horror short from this creative team. The film is being used as a teaser for a future feature film in English.