This is the story of Barnie, a grown man who likes to play with his childish reflection.
READ REVIEW
Next Previous 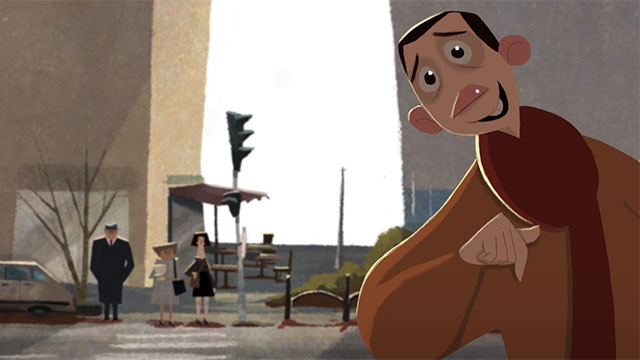 Created as their graduation film from Bezalel Academy of art and design, Bosmat Agayoff & Alon Ziv’s ambitious animation Reflections is a short of intricate design and well-considered concepts. Overflowing with complexity and depth, this talented filmmaking duo have managed to strike an ideal balance between entertainment and intrigue, by creating a film that allows its viewers to admire the technicalities, whilst also reflecting upon the message at its core.

Centring around a character reluctant to grow up, the initial youthful energy of Reflections is soon replaced with a much more sombre tone, as our central protagonist is encouraged to mature by an ever-expanding group of strangers. A pitch-perfect symbolisation of the road from childhood to adulthood, Agayoff and Ziv’s charming tale suitably compliments its narrative diversion with some subtle but effective changes in production style. As Barnie’s transformation from child to man takes place, the atmosphere alters and soon the bright and carefree opening of playful pianos and light palettes is replaced with mournful melodies, cooler colours and lots of rain.

Employing digital methods to create traditionally-styled, hand-drawn animation, visually Reflections is hugely impressive for a student film. Created using TVPaint, Photoshop and After Effects CS6, meticulous character-design animated with fluid precision, blends expertly with the soft-focus, hazy form of the universe in which this tale unfolds.

Evocative of Disney’s Oscar winning animated short Paperman, Agayoff and Ziv pay homage to traditional animation and classical storytelling without ever having their film feel tired or dated. Joining the likes of Howl, For the Remainder and 2010 Short of the Week award nominee Between Bears, Reflections is the latest of an ever expanding list of Bezalel animations to have been featured on the site.