Animated minimalism is used to maximum effect in this gorgeous and bizarre short student work from Israel.
READ REVIEW
Next Previous 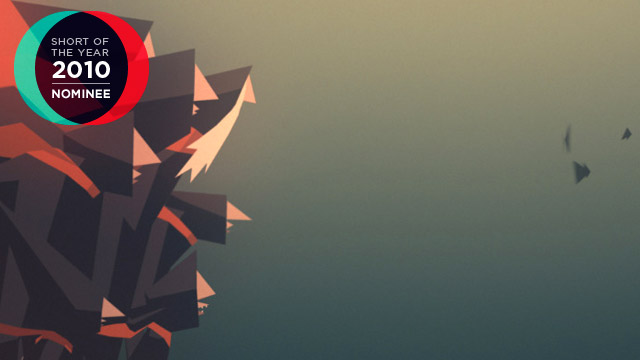 I love the discovery of not just a new film but of a filmmaker who can consistently pull the air right from your lungs with the beauty of their work. I’ve been harbouring these feelings for animator Eran Hilleli for a little while now, but after watching his latest piece Between Bears I’m ready to slavishly follow where ever Hilleli wants to lead.

Hilleli doesn’t create films that run along a straight cause and effect path, instead he evokes a world and presents events in that reality. For his Bezalel Academy of Art and Design graduation film Between Bears, the events run as follows:

A black bear shaves off his fur, which falls in polygon shards that take flight into the forest, leading a growing group of hooded characters through landscapes and seasons. Eventually they can go no further as they reach the end of a jetty, where they pay witness to Cronenbergian, Lost Highway style switch between the forest bear who kicked off the journey and an iceberg floating polar bear.

As with his previous pieces (Three and a Half Seconds About Life, We Used to Call People Late at Night, inside/out), Hilleli employs minimalism with the honed skill of a surgeon. His frames (created with a combination of Maya and After Effects) are never over-stuffed or layered with eye-candy; yet they are beautiful to look at in their clean simplicity. So too is his approach to ‘story’. Events certainly happen but it would be stretching things to call it a narrative. Hilleli quickly builds a world and its rules and leaves you with the freedom to piece together the why and how of the actions you witness, which rewards repeat viewings and the inevitable re-interpretations. For example, why does the bear shave? Why do the people follow the fur? How does the switch happen? Instead of a set of infuriatingly unanswered questions, I came away from Between Bears totally satisfied with my peek into a world beyond logical reasoning.

Given the recent proof provided by Christopher Nolan’s Inception that audiences are willing to engage with complex narratives, someone needs to open their cheque book and get Hilleli working on a feature. I’ll be the first in line for that.