An astro-minor is reluctant to return to the world she once knew after two years on the moon.
READ REVIEW
Next Previous 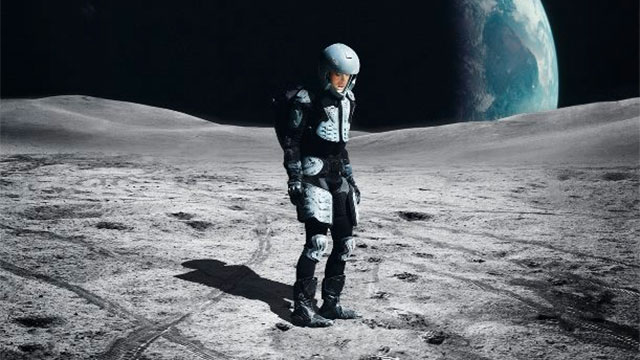 This site has been a hub for discussion on the state of the science fiction short in recent times (see the comments on Memorize for a prime example), with the balance between narrative and special fx in these genre films being a particular focus of the debate. Director Stuart Willis introduced me to the term “science fiction with a soul” when discussing his film Payload last year and it’s a description that aptly fits Joe Sill’s striking 13-minute short Expo.

Female astro-miner Shona has been mining under dangerous conditions on the moon for the past two years in order to pay for expensive medical treatments in hopes of save her bed-ridden daughter Darla, and now that her tour is completed, a younger astronaut Paige has come to replace her.

Exploring the idea of the moon as a limbo, the believability of the world painted in Expo relies heavily on some fairly complex visual fx. Sill and his team created the imposing aesthetics of the film by recreating the moon’s surface on a soundstage and completing the look with some impressive green screen work and well-considered production design. Created on a slight budget, Expo’s Moon set sequences certainly exceed the student label that accompanies this Dodge College of Film and Media Arts production. With Sill’s film being a shining example of exactly what film students can achieve when they truly utilise the resources available and push the boundaries of what is expected from them.

Whilst Expo’s story may be set on off-planet, the themes of grief and bereavement running through its heart are ones firmly grounded in this world. Successfully avoiding the pitfall of becoming nothing more than an fx showreel, student director Sill has woven an emotionally heavy plot into his film that battles valiantly to compliment the prominent visuals of Expo. Whilst it would be easy for some to write Expo off as style over content – the eye-catching imagery is always going to be the standout aspect of Sill’s short – surely this a case of one being exceptionally strong, rather than one noticeably weak?

Expo is another entry into the ever-expanding catalogue of science fiction shorts and another film destined to add to the debate regarding the future of this genre.