In 2027, everyone is implanted with a chip which records everything they see. It is the end of judicial doubt, but not of crime, in this slick sci-fi action flick.
READ REVIEW
Next Previous 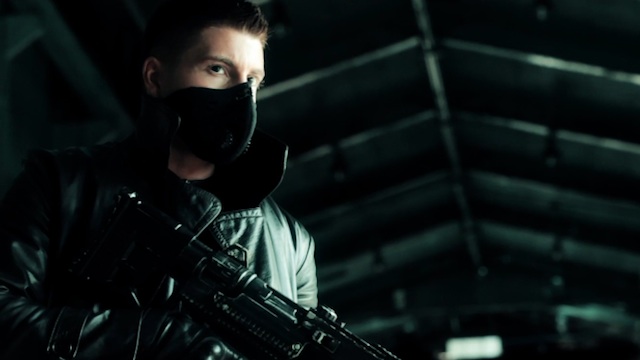 Fresh from Sweden, Memorize is our latest entry in the genre of short film alternately known as VFX/Proof of Concept/Calling Card/Feature Teaser. It  is a stylish action piece from Jimmy Eriksson and Eric Ramberg, childhood friends and aspiring film directors.

Like the recently reviewed film, Plurality, Memorize film envisions a world where hiding a crime is impossible. Rather than an elaborate network of DNA sensors though, here authorities are able to ensure justice by directly tapping into an individual’s memory unit, rewinding and playing past events like a video stream. It is still a violent world however—if you’re guilty there is no chance of getting off, so maybe you shouldn’t go quietly—and thus the need for the SSU, a crack police unit with the skills and temperament of Judge Dredd.

Sporting well-thought out fight sequences and impressive technology design, the film is a quality showcase of craft for both Ramberg and Eriksson, a former game designer intent on breaking into the film industry. Story-wise it’s not bad either, though limited in the way that this whole genre is limited—both by runtime and by differing priorities. There are certain logical inconsistencies, and our main bad-ass cop is utterly without personality, but the main concept is adequately introduced, and we actually meet a potential villain. Assuming there is a feature length script, this would be a pretty good cold open.

Elements such as the acting, photography, UI  design are good but not excellent, however the film is more than the sum of its parts due to some real panache it its direction. We are starting to see a lot crossover from games and design into film via these VFX pieces, and I think that the holistic way these artists look at space is a major reason why. Eriksson was a level designer for major game franchises, and I imagine there to be difference between deciding how to design the visual continuity of a space via shot selection—an autocratic power over perception—versus designing a space with a gamer’s 360 degree freedom of movement in mind. While there is nothing innovative per se in the film’s framing or edit, it does feel fresh.

The filmmakers are managed by Scott Glassgold, who has quite few short film clients under representation, including Jesús Orellana of ROSA fame and Stephen Zlotescu of True Skin. Will Eriksson and Ramberg be able to score a development deal off the strength of this effort? Time will tell.