Set in a dystopian future where the lower classes are left on Earth with only a space elevator that connects them with the possibilities of a better life.
READ REVIEW
Next Previous 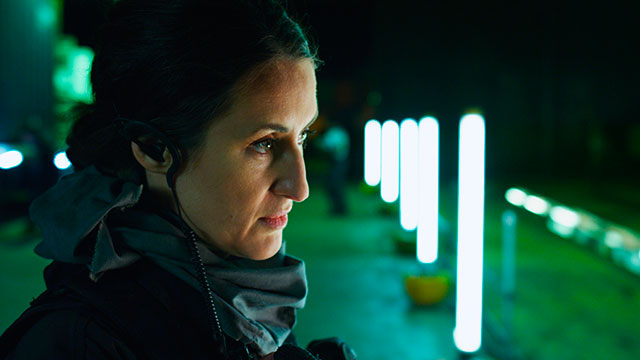 Rob Munday
Inspired partly by stories he’d heard about remote mining towns in his homeland of Australia and partly by Jonas Bendiksen’s photographic series The Spaceship Junkyard, the dystopian world of Payload, Stuart Willis’ character-driven science fiction short film, stemmed from the simple idea of “people that the future has left behind.” As the story developed and notions of human trafficking and asylum seekers were considered, Willis’ bleak vision of the future would see a world where Australia could become a transit hub for smuggling.

A family of scavengers. A callous matriarch. A home in the shadow of a space elevator. After a brutal attack on his father, Simon Carter must sacrifice everything to save his family.

With a background in visual effects, having worked on large scale feature productions such as Harry Potter and the Order of the Phoenix and Superman Returns, you would be forgiven for expecting Willis’ film to be one that was laden with effects. Working with the approach that “sci-fi is at its best when it is about people”, Payload manages to find that rare equilibrium in its genre—a balance between visual impact (or “moments of awe” as the director describes them) and a dramatic narrative. Having also worked on Spencer Susser’s 2008 apocalyptic short I Love Sarah Jane, an experience that showed Willis that character-driven genre films can find a wide audience, Payload is the filmmaker’s third short as director. Earlier shorts 307: A Love story and Not My Film, saw the director delve into the realms of romantic comedy and experimental narrative, but it looks like the genre of science fiction is where Willis will get his first real taste of directorial success.
Having initially considered an online-only approach, the distribution plans for Payload soon changed when the film was accepted into Palm Springs ShortsFest 2011, where it premiered. After a year of touring the festival circuit, Willis’ decided it was time to release the film online, where he hopes the huge audience for sci-fi will appreciate his work. So with Payload now released onto a wider audience, what is next for the Australian director? When asked, Willis responded via email saying, “I’ve been working hard on the feature of Payload. I can’t say too much about it, but the scope is much bigger and more dynamic. It’s set about ten years after the short when Earth is being evacuated. I’ve also been writing another feature called Corona. It’s a science-fiction take on a ghost story. So even though its got some great sci-fi visuals in there, it’s really quite character driven at its core, too.” With so many sci-fi shorts that are long on style, but short on plot, being acquired by Hollywood, let’s hope that Willis, who prioritizes things like plot and strong characters—things we hold valuable here as SotW— is able to attract some help in making those feature dreams come true.
Vimeo Stuart Willis
LIKE TWEET