A chorus of women are borne from the movements of a single dancer in this dreamlike pas de trente-deux.
READ REVIEW
Next Previous 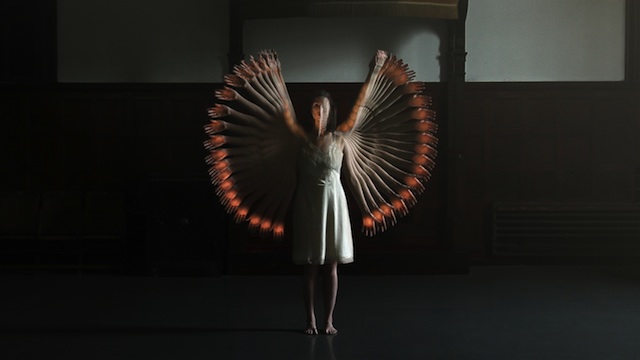 It is not really part of our editorial focus to highlight experimental work, but when the work feels fresh and possesses true beauty, such as with Solipsist or the work of Max Hattler, we lean toward making exceptions.

Thus an exception will be made for Michael Langan—a rare talent, the kind which we seek to celebrate despite his work being primarily experimental. Best known for his Student Academy Award nominated film Doxology, we’ve made note in the past of his short film Heliotropes and his piece for Showtime, so new work from him is a big deal. Choros is that new work, debuting online today after a year on the festival circuit. The film is an innovative collaboration with the beautiful and talented Terah Maher, and is a continuing evolution of “visual echo” techniques that are as old as the medium of film itself.

Taking inspiration from Edward Muybridge and especially Norman McLaren’s Pas de Deux, Langan uses modern compositing techniques to create wonderful ghost-like images of movement, which beautifully display movement while deconstructing film and animation technique. Telling a loose narrative of rebirth through 3 movements, and utilizing a score by pioneering composer Steve Reich, the film honors traditional forms of classical music and dance. Still, it is Langan’s post-production efforts that are the draw, as the visual effect of multiple, overlapping Terahs is both surreal and lovely.

By using computer compositing, Langan is provided with much more freedom in his art design and photography than McLaren was. Not being technically minded, I haven’t studied the image to determine if it is time-delay layering or multiple captured performances that underly the effect, and I don’t care to find out. To quote Arthur Clarke, “Any sufficiently advanced technology is indistinguishable from magic”. I think that’s what I want to take from this piece more than anything else—a feeling of awe at something magical.