An experimental film dealing with themes of separation and connection, Andrew Huang's latest is a jaw droppingly gorgeous visual symphony in 3 movements.
READ REVIEW
Next Previous 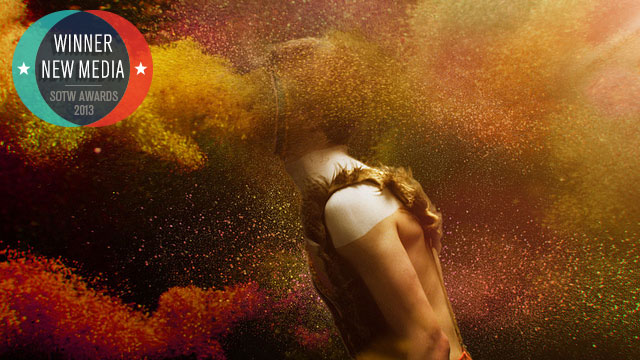 Solipsist is an experimental film for the web generation, both its theme and appeal. Philosophical depths reveal themselves upon inspection, but the film’s surface pleasures are more accessible and immediately apparent: abundant, trippy effects, an engaging score and so much color! Its lush visual landscape is the immediate draw, and though the 10 minutes race by as you sit transfixed, the indelible images linger, affirming this as a product of a truly gifted and confident filmmaker.

Comprised of three loosely related scenarios, each segment reflects characters attempting merge or physically connect. This is in reaction to the title of the piece, which refers to a philosophical concept that posits we can only know what is in our own minds, and are thus unavoidably isolated. In an artist statement, the filmmaker, Andrew Huang, notes that he grew up fascinated with the concept, and the tragedy of being trapped in one’s own physiology. Through contemplation of the nature of synaptic gaps in neurons and the structure and purpose of language, ideas for these 3 sketches emerged, centering on attempts to build bridges between individuals.

The internet itself is a bridge-maker of course, a vast information and communication network that connects millions of minds, so we’re very happy to see the film online so soon after its January World Premiere at Slamdance. The film picked up the “Best Experimental” prize at the fest, and will surely pick up more prizes along the way, but it is online where I think it will make its mark. It is the most striking experimental short I’ve seen since Daniel Askill’s seminal We Have Decided Not to Die, and marks a sea change for Huang known for his darker work, like Doll Face, an early YouTube viral hit.

What is even more fascinating about Solipsist though in this age of CG trickery (and considering Huang’s own CG expertise) is that evidently most of it’s stellar effects work is practical (see making-of video). Huang wrote to me saying,

“We shot the film in a tiny stage in Burbank, CA.  Everything was shot against greenscreen so the entire film required an immense amount of compositing, especially since much of the film involves practical effects.  The only real CG in the film are the tendrils and tentacles that cover the girls’ faces in the first scene.  We used a lot of footage reversal effects to create the effect of the girls’ wardrobe growing out over them.  The underwater scenes were shot in a 100 gal fishtank.  We puppeted the underwater creatures with rods.  They were made from a combo of fish bait/tackle, feathers and sculpey.  By the end of the shoot they were completely mangled.”