The proverbial flap of a butterfly's wings set into motion a chaotic chain reaction that perfectly ruins one man's morning.
READ REVIEW
Next Previous 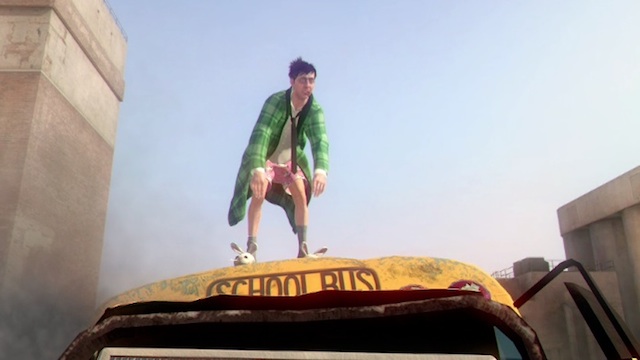 It’s the weekend, and though I have a little bit of downtime, I’m too tired for something deep and existential. Heck, I’m feeling too lazy for anything uplifting and soulful. Not even slick or suspenseful will do. I’m heading to a party soon and I want a short film like I want my fast food: fast, cheap and out of control.

The Butterfly Effect hits the spot. Directed by by Dan Sumich of the hip London production company Passion Pictures, the film is bright, loud, and garish. A 3 minute extended action sequence, this animation addresses a section of my short film soul I didn’t  realize had been neglected of late.  We used to joke about how students at the big French schools would always animate chase sequences (just a few examples), and evidently our snickers got back to them, because I haven’t seen one in a loooong time.

This film amply fills the void. Premised on the well-known theory, the film is less a chase than a race to stay one step in front of calamity. The film imagines a chaotic chain reaction inflicted on a poor schlub and his city at large, started by one innocent butterfly’s act. While frenetic in its action, the pleasure of the film is in the rubberband-effect—as coincidences mount, there is great joy to be taken in the inventive ways Sumich is able to continually up the ante of gleeful destruction. Braindead, but really fun, its just what i need right now, and at 3 minutes you’ve got enough time to watch it while you drain that last beer before going out.