Pete, by day, an awkward salesman, by night, a government-controlled secret agent assigned to thwart a theft
READ REVIEW
Next Previous 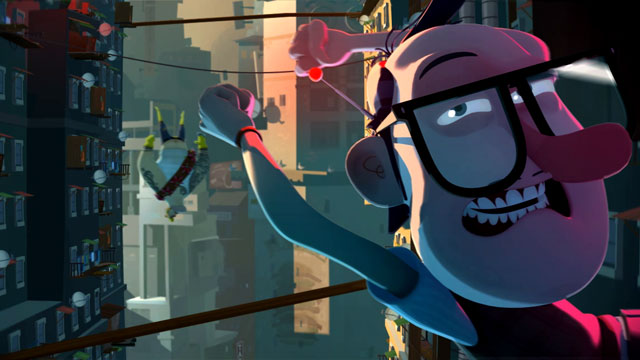 Holy moly! What did I just watch? 7 minutes of madcap action with nary a second to breathe I think. Salesman Pete hides itself as an innocuous CG short, but quickly reveals itself to be a masterpiece of animation, beautifully adapting 2-D designs into 3-D space and promoting a madcap, frenzied pace of action that is rich in visual trickery.

Does that make it a masterpiece short film? Maybe. Salesman Pete looks like a workaday drone, but mad scientists put something in his brain to make him a crazy super-hero. Now he spends his time putting down machine uprisings and fighting zombie presidents alongside his faithful sidekick, a talking sirloin steak. So you can see, the filmmaking team of Marc Bouyer, Max Loubaresse, Anthony Vivien lay the crazy on a bit thick. That’s ok generally, but the film suffers some issues by descending into an extended chase sequence for the majority of its runtime. In a 2 min film, like its famous contemporary, Oktapodi, that approach can work. Drawn out to Salesman Pete‘s lengths though, some, like Cartoon Brew’s Amid who was on top of the film’s release, lose interest.

I wasn’t one of those people however, I happened to be engrossed by the ingenuity I saw throughout the film. The three filmmakers dropped out of Supinfocom to produce the film “their way”, and just a week after we produced a stellar playlist of the Best of French Animation, there is another short film to add to the roll.