Symbolic remix of the world's modern travesties rendered with an incredible level of polish by a new Canadian animation studio.
READ REVIEW
Next Previous 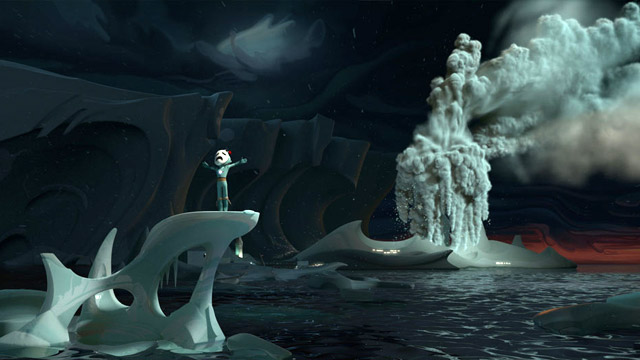 Every once in a great while, I come across an animated film that’s so fresh and so bizarre that it’s near impossible to describe. The best films will innovate on story, others on style. But it’s rare to see both come together in one film. It doesn’t happen often—David OReilly’s Please Say Something, Eran Hilleli’s Between Bears, Chris Landreth’s Ryan. Now, we present Heliofant’s dreary surrealist short I, Pet Goat II.

I, Pet Goat II is a difficult film to dissect, but I’ll give it a try. First, the story is less of a narrative and more like an interpretive dance of modern travesties—America’s war on terror, religious fundamentalism, militarianism in Aftrica, totalitarianism in China, and exploitation all over the world (some of which may seem a little heavy-handed to us Americans). It’s packed with loaded symbols used to remix pop culture into a new mythology complete with surreal landscapes and zany characters.

Second, it’s very theatrical. There’s a lot of dancing with scenes rendered like sets and characters painted like vinyl figures. Even the editing has a bit of a Red Curtain aesthetic. The movement of the film is one of its greatest strengths. Motion capture was used for about half the animation adding a much needed ‘real’ touch to the surrealism.

Heliofant is a new animation studio based in Montreal.

Heliofant is a nascent independent computer animation studio focused on creating experimental and challenging content. Bringing together artists from the fields of dance, music, computer animation and visual arts, the company is very interested in exploring the common ground that underlies many spiritual and philosophical traditions in a lyrical form.

Every film is a collaborative effort, but Heliofant goes a step beyond just a credit listing to call out their individual creativity. Everyone’s contribution seems to shine—in particular, the driving score by Tanuki Project.

Keep your eyes on Heliofant. The world of animation just got a little more interesting.