Lyrical, meditative documentary on the immensity of the universe and the persistent human spirit to experience it to the utmost.
READ REVIEW
Next Previous 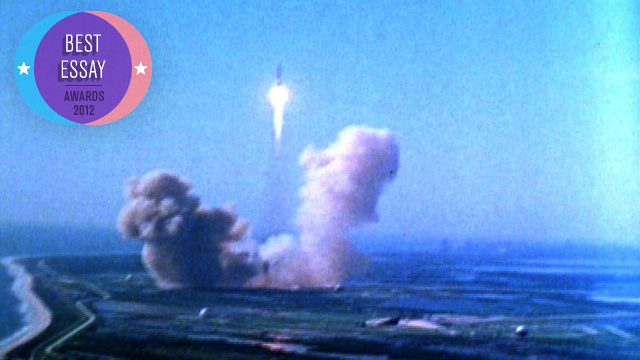 Take a moment, unplug yourself from the busy world around you, and take a journey on The Voyager. This beautifully minimal documentary tells the story of Voyager 1 and 2—two probes launched into space by NASA in 1977 to photograph and measure the unseen parts of our solar system. They were built to last just two years but continue to this day at a speed of a million miles a day on a trajectory that will take them deep into the unknown reaches of the universe until the end of time. Each probe contains a golden record with audio and images of humanity as a beacon of what life was like here on earth should any intelligent life out there happen upon it.

What exactly is on the golden records? A collection of natural sounds, music, spoken greetings in 55 languages, art, architecture, mathematical quantities, and other profound scientific discoveries. In fewer words, the best moments of humanity—”the ultimate mixtape.”

The idea of the golden record sprung from Carl Sagan, the popular American astronomer of the 1980’s series Cosmos, who was inspired by his childhood visit to the 1939 New York World’s Fair where he witnessed the famous burial of a time capsule at Flushing Meadows.

(The film) is a valentine to Carl Sagan and the way that he really embodies the place where scientific skepticism meets child-like awe and wonder and joy and optimism.—(Penny Lane)

The Voyager then turns that sense of wonderment on ourselves and the film becomes more than a space documentary. She tells the story of Carl Sagan and his co-collaborator who fell in love while working on the golden record project. That love story bleeds into her own personal story of her and her fiancé and their shared love of the cosmos.

In the end, the film is much more than a documentary about the Voyager probes. At its core, it’s a profound story about love and the fearless ability of the human spirit to stand in awe of its vastness, to dream of its mysteries, and to catch a glimpse of it’s incomprehensible complexity, and, knowing what triumphs and heartache lie ahead, still boldly jump in head first. It’s a profound love to experience the unknown that is so uniquely… well, human.

It’s not easy to tell such a grand story and connect it to something personal, but The Voyagers takes its time and patiently builds at a believable pace. The film is an ode to her fiancé, and their own love story winds its way through the narrative.

The film itself is constructed from a mashup of archival footage—a great low-cost method of filmmaking that we’ve seen in other docs like Everything is a Remix or the sampled faux-real stories of Kelly Sears (Once It Started It Could Not End Otherwise). The Voyager screened at AFI Fest, Rooftop Films, and dozens more this past year. Be bold, take a moment now and be reminded that the universe is still a big place full of beautiful mysteries.