We've been attacked againonly this time it's our own fault.
READ REVIEW
Next Previous 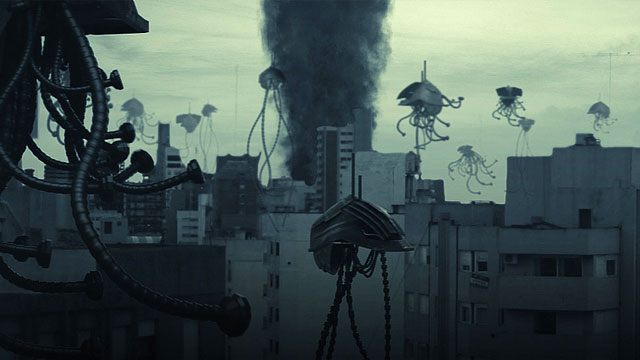 Following the undeniable success of Alive in Joburg and Panic Attack, the science fiction short has become somewhat of an online phenomenon in recent times. With the aforementioned films clocking up millions upon millions of views between them and both leading to feature films deals backed by Hollywood directors (Peter Jackson & Sam Raimi), there seems to be no better genre for announcing your entrance into the world of film.

The latest slice of sci-fi to invade our screens is NEWMEDIA, a thoughtful short from Argentina looking at an invasion of a different kind, one that is our own fault. The similarities to Alive in Joburg and Panic Attack are evident early on; an urban landscape taken over by alien bodies, expertly crafted in detailed CGI. Where comparisons to the films of Blomkamp and Alvarez were always likely, NEWMEDIA has enough flair and intrigue within its brief duration to make it stand out in the over-saturated world of CGI shorts.

With echoes of H.G.Wells legendary science fiction novel War of the Worlds coursing through it’s veins and an underlying message on how society consumes media, there’s certainly no ignoring this measured short. It may lack the initial awe inspired by the originality of Alive in Joburg or the impact of the frantic assault in Panic Attack, but Motion Lights’ captivating NEWMEDIA is not only beautifully suited for online viewing, its dark ominous tone is sure to linger in your headspace, floating around for some time after.