All My Dreams on VHS

**CURRENTLY OFFLINE** - If you hoard your dreams, someone is going to want to watch them.
READ REVIEW
Next Previous

All My Dreams on VHS 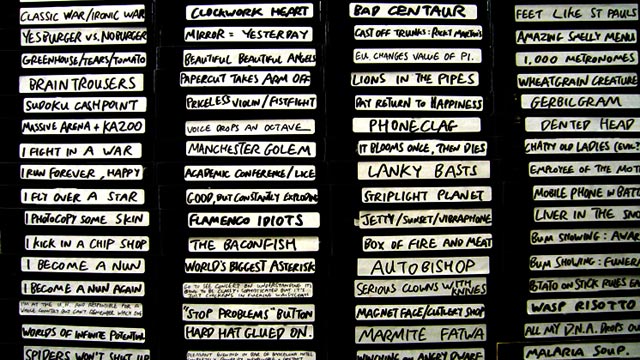 I’m becoming a fan of these small awkward comedy shorts (Successful Alcoholics, No Deal). They’re like listening in on a friend tell a funny story about last night’s escapades. In All My Dreams on VHS, James brings his co-worker Erica back to his apartment where she stumbles upon a mountain of VHS tapes. Each tape contains a separate dream with titles like Tourettes Alligator, The Shy Policeman, and Hostage Crisis all recorded using Dreamspoon wireless technology. When James heads out for milk, Erica’s curiosity gets the better of her when she discovers a tape with her name on it. British awkward hilarity ensues with one surprising turn after another.

With these small comedies, the acting is a critical balancing acttoo jokey and it becomes unwatchabletoo subtle and you miss the point. In an interview with Charlie Rose, Steve Carell had what at first seems like backwards advice for comedy actors: don’t try to be funny. The funniest moments come from honest performances with good timing. That’s probably why some of the funniest actors today like John C. Reilly, Ed Helms, Will Farrell, James Franco, and Bill Murray can also put out great dramatic performances. Fortunately here the acting by O.T. Fagbenle (UK TV actor) finds the right balance.

Director, Tim, who looks to be a musician at heart, wrote a stage show comedy called Buzzard in 2009. Unfortunately though, he isn’t actively directing any more filmsat least that’s what a quick IMDB and Google search suggest. Here’s hoping he makes another trip back to the silver screen to create more comedy magic.