There's just one thing in Mark's way of a great night with a dream girlher creepy male roommatein this awkward comedy with a stellar cast of B-list celebrities.
READ REVIEW
Next Previous 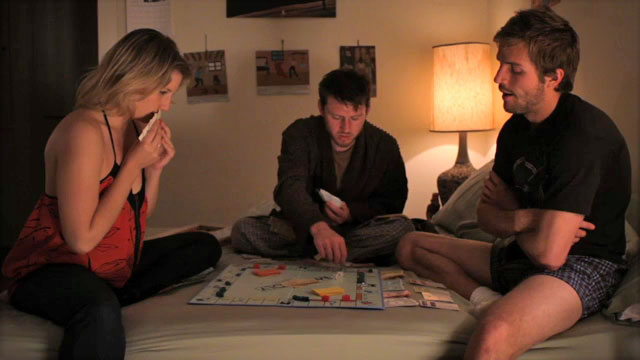 When it comes to great short comedies, I often feel as helpless as Coleridge’s mariner”Water, water, every where, Nor any drop to drink.” Because the truth is, in an online world flooded with comedy, it can often feel impossible to find anything really funny. And so when I come across a film like No Deal, the laughs hit all the harder.

No Deal starts with Mark heading toward home base with dream beauty Cassie after meeting at a party. This fantasy begins to crumble however when they’re interrupted by Kygan, her annoyingly-dependent male roommate. It all wouldn’t matter so much, but Cassie is sympathetic to every odd need he has whether it’s for a cleaning solution suggestion or a bear hug to crack is back. As the oddities mount, Mark’s patience and libido are caught in a tumultuous battle that plays out with great comedic awkwardness.

For what it’s worth, my mom uses comet to clean everything. If you dilute it it’ll be fine. Wood tile whatever you gotta clean at 2 in the morning, it should be totally fine.

The acting is the real winner here. No Deal is a true “awkward comedy” in the likes of The Office and its copycatsa genre that’s all too easy to screw up. An actor has a difficult line to dance in taking a caricatured situation and be funny without coming off as too goofyyet, all three actors are superb. If any of the actors look vaguely familiar, you may recognize them for their supportive roles alongside better-known stars. For Michael Stahl-David (Cloverfield), Ari Graynor (Nick and Norah’s Infinite Playlist), and Keir O’Donnell (Wedding Crashers) No Deal gives them a chance to lead the presence on screen. Shorts like this can be a great way for typecast actors to break out and try something new. James van der Beek used a series of shorts on Funny or Die to prove himself as a comedic actor when he couldn’t land a role in a comedy.

Director, Joe Burke, a recent AFI grad, is making a splash in the comedy world. His Funny or Die short Marriage Drama with Virginia Madsen is also worth checking out. See these films and others on his websiteJoeBurke.net.